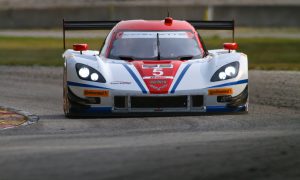 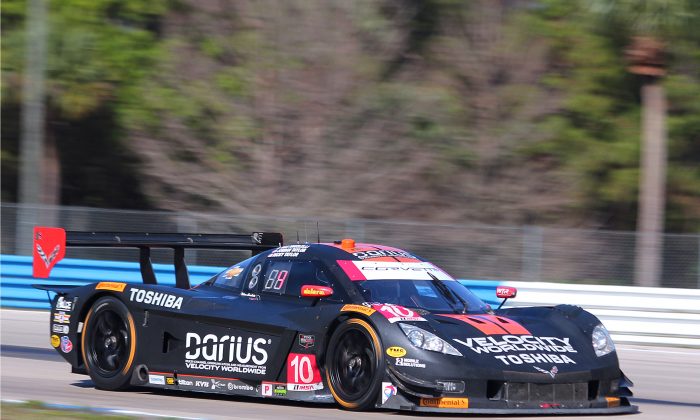 The #10 WTR Dallara-Corvette exits Turn Nine during the 2014 Sebring 12 Hours. The #10 was quickest in the first practice session for the 17th Petit Le Mans at Road Atlanta, Thursday, Oct. 2, 2014. (Chris Jasurek/Epoch Times)
Motorsports

Braselton, Ga.—The first practice session for the first Tudor United SportsCar Championship (and the 17th running of) Petit Le Mans is over, and not surprisingly, the 650-bhp Daytona Prototypes were the quickest around Road Atlanta’s twelve fast corners.

The #10 Wayne Taylor Racing Dallara-Corvette beat out the #5 Action Express Coyote Corvette by a mere nine-hundredths of a second, with a lap of 1:15.087 around the 2.54-mile track. The #90 Spirit of Daytona Coyote-Corvette was third quickest, three-tenths behind the #5 AXR car.

The #0 DeltaWing, back after skipping a couple races to focus on development, was fourth, another 25 hundredths down—a very strong showing, proving that the time of was time well spent.

The only P2 Prototype in the race, Oak Racing”s #42 Ligier-Honda, was ninth quickest—behind the PC- championship winning #54 Core Autosport Oreca FLM-09. Oak’s new Ligier was the quickest car in the field at its debut at the Lone Star Le Mans two weeks ago, and Road Atlanta should also suit the car, so it’s Thursday morning performance is anomalous.

Porsche put in a powerful performance at Lone Star Le Mans so it was no surprise to see on atop the GT Le Mans timesheet—but it was a surprise that the quickest Porsche was the #17 Falken Tire RSR. The factory-supported #912 RSR was a couple tenths slower, followed by the #3 Corvette Racing C7.R—and the other Porsche North America RSR, the #911.

Practice session two starts in an hour. Follow it on Live Timing and Scoring at IMSA.com.

The race will be streamed live in its entirety on IMSA.com. Television coverage starts at 3 p.m. on Fox Sports 2, running continuously through the podium ceremonies. A two-hour race recap will air Sunday morning at (possibly) 8 a.m. on Fox Sports 1 or your local Fox affiliate.