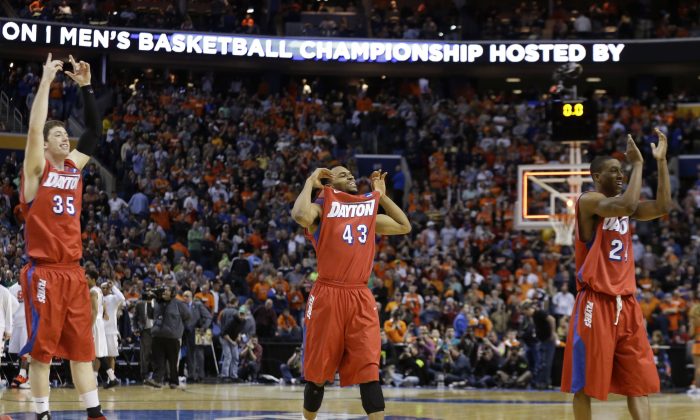 BUFFALO, N.Y. (AP) — THE University of Dayton is to be reckoned with.

Dyshawn Pierre scored 14 points and Jordan Sibert, held scoreless in the first half, hit a key 3-pointer with 47.7 seconds left as Dayton stunned Syracuse 55-53 Saturday night to earn a spot in Sweet 16 for the first time in three decades.

Syracuse was poised to pull out another close victory, but Tyler Ennis missed two jumpers that would have given the Orange the lead in the final seconds.

Dayton (25-10), the 11th seed in the South Regional, advances to the regional semifinals next week and will play Kansas or Stanford.

The third-seeded Orange (28-6), who finished second in their first year in the Atlantic Coast Conference, struggled all game against the swarming Dayton defense, missing all 10 attempts from beyond the arc, while the Flyers hit seven times from long range.

After Sibert stepped out of bounds with 14 seconds left and Dayton up by one, Ennis took a jumper from just inside the 3-point line instead of driving the lane as he had all night. The standout freshman finished with 19 points on 7-of-21 shooting, including 0-5 on 3-pointers.

Syracuse fouled Pierre and he made one free throw. Ennis rushed down court and missed the potentially winning 3 as the buzzer sounded.

Sibert finished with 10 points and Sanford had eight.

It was another close win for Dayton after beating in-state rival Ohio State 60-59 Thursday. After that game, the Dayton Daily News mocked Buckeye fans who refer to “The Ohio State University” with a headline that read: “THE University of Dayton.”

Fair had 14 points on 4-of-14 shooting and 10 rebounds in his final game for the Orange. Jerami Grant had just four points and attempted only three shots before fouling out late. Trevor Cooney, who broke out of a long slum with four 3-pointers in the second round against Western Michigan, had two points and missed all four shots he took from behind the arc.

Dayton, which improved to 11-0 when holding opponents under 60 points, led by as many as seven in the first half and extended its two-point halftime lead to six on the transition strikes the Flyers thrive on. After Cooney missed a 3 from the left corner, Khari Price hit a 3 at the other end after a quick rush to make it 32-26 with 12:54 left.

The game went back-and-forth from that point, with Fair and Ennis hitting layups to give Syracuse a 40-37 lead with 7:48 left.

The Flyers reeled off seven straight points to regain the lead. Scoochie Smith hit a 3 from the top of the key and a wide-open Pierre drained another from the left corner after some slick passing.

Grant’s lay-in halted the rush and Ennis followed with a pair of court-long dashes and layups to pull the Orange within 47-46 with 2:42 left.

The Flyers extended the lead on Smith’s breakaway layup after a Syracuse turnover and Sibert’s 3 at the shot clock buzzer gave the Flyers a 52-46 lead with 47.7 to play.

Ennis came back with a three-point play just 7 seconds later and then hit two free throws to make it a one-point game with 24.8 seconds left.

Before the game started, the Syracuse fans were already chanting ‘Let’s Go Orange!’ It didn’t help, as Syracuse suffered through its worst first half of the year, hounded by Dayton’s intense man defense.

The Orange committed four turnovers in the opening minutes and fell behind 11-4 on Sanford’s jumper at 11:33, seven of those points coming off Syracuse miscues.

The Flyers went into the locker room leading 20-18 and had to feel good about their defensive effort.

Ennis struggled more than he has in his standout freshman season, going 1 for 8 and unable to convert the shots he has hit all year.

Syracuse started 25-0, and the Orange rose to No. 1 before losing six of their final nine games.