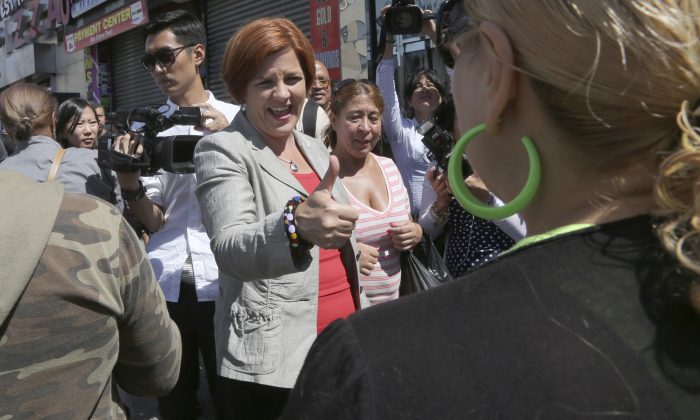 NEW YORK—With just four days remaining until the primary, Democratic mayoral hopeful Christine Quinn has put her campaign in ground game mode. With picturesque weather on Friday, Quinn spent much of the day in northern Manhattan at subway stops and senior centers garnering support for the Sept. 10 vote.

Quinn, who has been campaigning for much of the year, has rallied through a fierce final stretch leading up to the Tuesday primary, mostly fielding attacks from candidate Bill de Blasio.

Despite the long, often rough road, Quinn appeared energetic and positive about the outlook for her campaign.

“I am holding up great,” Quinn said with a smile from 181st Street in Washington Heights on Friday, Sept. 6. “When you are getting to meet so many enthusiastic New Yorkers who it is their first time they get to vote, and they say they are going to vote for you, how can you be anything but excited.”

Getting out the Vote

Quinn said with just four days left in the race her campaign is focused on turning out the voters, largely with the help of union endorsements, which include property service workers union 32BJ SEIU and the New York Hotel Trades Council.

“Up to this point my campaign volunteers have knocked on 1.3 million doors,” Quinn said. “We are going back to the voters we have identified and turning them out come Tuesday.”

While on the streets and at the senior center visits on Friday, passersby seemed largely supportive of the current City Council speaker. In a neighborhood with a large Hispanic population, Quinn had Spanish speaking staff and volunteers on hand who translated her message for her.

Many people shook Quinn’s hand, stopped to have their pictures taken, and took flyers (which touted her endorsements in the three major daily newspapers).

Not everyone was happy to see her. One man took the flyer and crumpled it up, tossing it at Quinn while she was speaking to another gentleman. A woman walked by yelling she would be voting for de Blasio.

At an afternoon stop in Lower Manhattan a gentleman got into a lengthy debate with Quinn about St. Vincent’s Hospital closing. The gentleman spent at least five minutes quizzing Quinn and New York State Senator Brad Hoylman on hospital closings.

If he was looking to get a rise out of Quinn after a long day of campaigning, he had come to the wrong place. Quinn kept her cool, never raising her voice.

“I felt the guy who wanted to talk about St. Vincent’s didn’t really want to have a conversation,” Quinn said. “When someone won’t actually have a conversation and is just kind of yelling, that is frustrating because sometimes there is misinformation out there. What are you going to do?”

“If someone has a substantive concern that is different, you talk about the issue,” Quinn said. “Sometimes you come to an agreement and sometimes you don’t.”

Quinn has taken shots by her opponents on several issues, but two issues have hurt her the deepest during the campaign: extending term limits and showing interest in keeping Raymond Kelly as NYPD Commissioner.

The attacks have left the once front-running candidate sitting in third place in the latest Quinnipiac University poll.

On Friday, Quinn took to the airwaves as a guest on the Brian Lehrer Show as part of his candidate Q-and-A series. During the show she dismissed the notion of being the front-runner, saying name recognition from being speaker was likely a big reason for the earlier results.

“The public polls often drive a narrative in the press, but they are often very inaccurate as we see in elections,” Quinn said. She cited the last mayoral election in which current Mayor Michael Bloomberg was shown to be up by double digits, but ended up winning by just a few percentage points.

“I think we have a few days left until the primary and, I know this sounds cliché, but that is the poll that matters,” Quinn said.

Callers asked most of the questions during the half-hour radio interview, and the issue of term-limits and Kelly came up.

In a rare instance in this year’s campaign, she was given an open mic to explain herself for more time than a 60-second debate answer, or a shotgun response at a press conference Q-and-A.

Quinn was asked about extending term limits by two separate callers, and spent almost five minutes not only defending her position, but also explaining in detail how her opponent de Blasio had flipped on the same position.

“I thought, given the extreme economic crisis we were in, it was appropriate to give voters a choice of consistency or not,” Quinn said, adding the decision was not easy. “I knew there was opposition to it, but look David [the name of the caller] I think what you want in a leader is someone who is willing to make a tough decision … because if you are mayor, you will have to make decisions that are going to be unpopular, and you don’t want someone who is afraid to do that.”

Quinn has criticized de Blasio for switching his position from being in favor of term limits in 2005 when he was seeking the speaker’s position, to being against them in 2008 when term limits was up for a vote.

At public events Quinn frequently comes across as reactionary on the topic, but on this radio interview she presented the facts in a authoritative-like manner, without brash emotion or anger.

There was a confidence and a matter-of-fact attitude she had not displayed on the subject in a while.

Quinn also talked about her backing of Kelly as NYPD commissioner. Her support of Kelly has been a controversial position because some people assume the controversial police practice of stop and frisk will continue as before.

A federal judge recently ruled that stop and frisk violated constitutional rights. As well, the City Council passed two highly contentious reform measures, including an Inspector General, which would put a monitor over the NYPD to oversee policies.

Kelly, who has been Bloomberg’s police commissioner, has been given the lion’s share of credit for the significant reduction of crime in the city. Murders hit a record low 414 in 2012.

There has, however, been a cost associated with that drop. The number of stop and frisks reached an all-time high of nearly 700,000 in 2011, with most of the stops involving young African-American and Hispanic men. Nearly 90 percent of the stops resulted in no arrests. Stop and frisk has driven a wedge between communities and the police, and Kelly has become the face of the issue for many.

Quinn has said she wants to end unconstitutional stops, and she supports the Inspector General bill. Despite her stance, she has taken considerable flack for wanting to keep Kelly on, with critics saying she is a hypocrite.

“If he wanted to stay on as my police commissioner, he would have to know his job is to keep this the safest big city in America, and he couldn’t do unconstitutional stops—period,” Quinn said. “It would be his choice if he wanted to lead that way.”

“Stop and frisk has been done wrong. He [Kelly] will decide whether he wants to work for me with the requirement you can’t do unconstitutional stop and frisk.”

Quinn said on Friday she has never spoken to Kelly about the job of police commissioner.

“We have had many, many conversations about stop and frisk, but I have never spoken to him about taking the job,” Quinn said in Lower Manhattan. Kelly’s name has been mentioned for the top Homeland Security position.

Like every high profile politician, Quinn has made decisions that people don’t like. But by and large, the response to Quinn on Friday was positive—something, try as they might, a campaign could never organize on the streets of New York City.

“I think the response has been terrific in Northern Manhattan, in the Bronx yesterday, and here today in Lower Manhattan,” Quinn said.

“That is why I feel so enthusiastic about what is going to happen on Tuesday.”