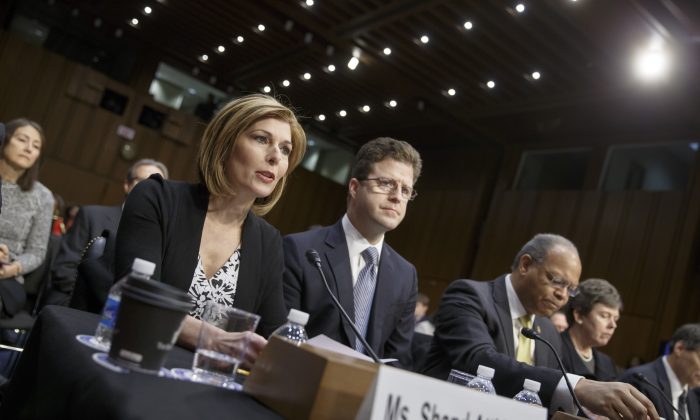 Investigative reporter Sharyl Attkisson, left, joined at right by attorney David Barlow, and other witnesses, testifies before the U.S. Senate Judiciary Committee as it continues for the second day of confirmation hearings for President Barack Obama's attorney general nominee, Loretta Lynch, on Capitol Hill in Washington, Thursday, Jan. 29, 2015. Lynch did not appear at the second and final day of her confirmation hearing, which was designed instead to feature testimony from outside experts. (AP Photo/J. Scott Applewhite)
US

At the second day of the U.S. Senate confirmation hearing for President Barack Obama’s attorney general nominee Loretta Lynch, a witness called to testify about Lynch’s qualifications and character took time to criticize the man who currently holds the position, Eric Holder.

The day before, U.S. senators in the Judiciary Committee questioned Lynch about her stance on issues ranging from Obama’s immigration policies, to the legalization of marijuana. Some Republican senators also took the opportunity to accuse Holder of turning the Justice Department into a tool to fulfill the president’s political agenda.

On Thursday, senators called on Lynch’s former colleagues and outside experts to speak about her abilities.

Milwaukee, Wis., police sheriff David Clarke, Jr., attacked Holder’s record to discuss what he wanted Lynch to change, if she were to be confirmed. Clarke blasted Holder for fomenting anti-cop sentiment following the events in Ferguson, Mo., where an unarmed black teen Michael Brown was shot and killed by a white police officer last summer.

“The incendiary rhetoric used by Eric Holder created a pathway for a false narrative that then became the rallying cry for cop haters across America,” Clarke said.

Public outrage over Brown’s death prompted national conversations about race and police use-of-force. Some police critics have charged that law enforcement breeds a culture of brutality and racism toward minorities.

Clarke, who is black, cried foul on that idea. “The accusation has been made that our community’s finest systematically engage in the practice of targeting young black men because of the color of their skin. That claim is patently false,” he said.

US Attorney Loretta Lynch, the New Yorker Born in Midst of the Civil Rights Movement

In the wake of Brown’s death, Holder spoke to the growing rift between police and the communities they served, urging for mutual respect.

“Our police officers cannot be seen as an occupying force disconnected from the communities they serve.  Bonds that have been broken must be restored.  Bonds that never existed must now be created,” he said in December, after a St. Louis grand jury declined to indict the officer who killed Brown.

While Holder has also spoken of his respect for the sacrifice and difficult work of police officers (his brother is a former officer), Clarke said Holder has been “hostile” toward local police in both public statements and policy decisions. He claimed those policies treated “police officers as adversaries instead of allies in the pursuit of justice.”

Clarke didn’t elaborate on what exactly those policies were, but he expressed dissatisfaction with federal oversight of local police training standards—further adding that he hopes it will end under Lynch if she were to become attorney general.

In October, Holder announced that he would conduct a review of local police training and tactics across the country, including those taught to officers in the Ferguson police department. Holder has also asked police departments to improve their tracking and documentation of police shootings and use-of-force.

Clarke added that relations between the Justice Department and local police have been “frayed,” and appealed to Lynch to rebuild those bonds during her tenure.

He also asked the Justice Department to “stop undermining the character and integrity of the American law enforcement officer.”

Despite Clarke’s strong words, he didn’t raise his hand when Sen. Patrick Leahy (D-Vt.) asked the panel of witnesses if they were opposed to Lynch’s nomination. Neither did anybody else.

Lynch is currently the top federal prosecutor in the Eastern District of New York. Although Republican senators were unhappy with Lynch’s endorsement of Obama’s executive action granting illegal immigrants temporary relief from deportation, some have said they expect her to win enough votes to achieve eventual confirmation. She would be the first black woman to become attorney general.

The committee will vote on her nomination in the coming weeks.