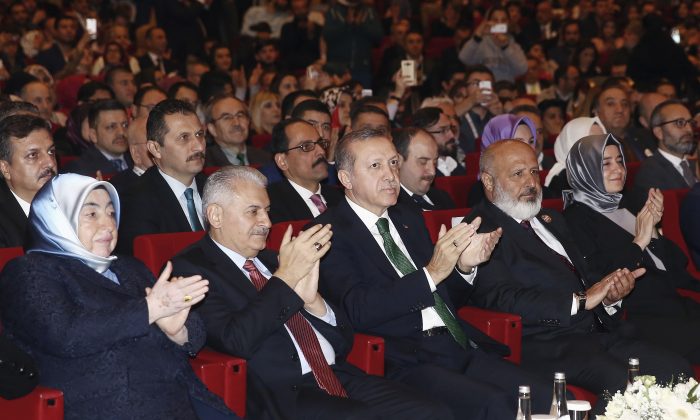 ISTANBUL—Turkey declared a national day of mourning Sunday after twin blasts in Istanbul killed 38 people and wounded 155 others near a soccer stadium—the latest large-scale assault to traumatize a nation confronting an array of security threats.

The bombs Saturday night targeted police officers, killing 30 of them along with seven civilians and an unidentified person, Turkey’s Interior Minister Suleyman Soylu told reporters Sunday. He said 13 people had been arrested in connection with the “terrorist attack.”

Prime Minister Binali Yildirim ordered flags to fly at half-staff Sunday across the country and at Turkey’s foreign missions.

There was no immediate claim of responsibility for the attack but two officials said suspicions were focused on Kurdish militants.

Deputy Prime Minister Numan Kurtulmus told the private news channel CNN Turk that “arrows point to the PKK.” He was referring to the outlawed Kurdistan Workers’ Party, which has waged a decades-long insurgency. That preliminary assessment was echoed by the interior minister.

“We have once again witnessed tonight in Istanbul the ugly face of terror which tramples on every value and decency,” Turkish President Recep Tayyip Erdogan said.

Soylu said 136 people remained hospitalized after the attack, including 14 under intensive care.

The first and larger explosion took place about 7:30 p.m. after the home team Besiktas beat visitor Bursaspor 2-1 in the Turkish Super League. Erdogan said the timing of the attack aimed to maximize the loss of life and vowed the nation would overcome terrorism.

The civilian death toll was lower because fans had already left the newly built Vodafone Arena Stadium after the soccer match when the blasts occurred. Witnesses also heard gunfire after the explosions.

Soylu said the first explosion was caused by a passing vehicle that detonated in an area where police special forces were located at the stadium exit. A riot police bus appears to have been the target.

Turkish officials said a person who had been stopped in nearby Macka Park committed suicide by triggering explosives moments later.

Authorities have determined that about 300-400 kilograms of explosives were used in the attack, Kurtulmus told CNN Turk.

Forensic experts in white uniforms worked overnight, scouring the vicinity of the stadium and the vast park where the suicide bombing took place. Glass from the blown-out windows of nearby buildings littered the pavement.

This year Istanbul has witnessed a spate of attacks attributed by authorities to the ISIS terrorist group or claimed by Kurdish militants. A state of emergency is in force following a failed July 15 coup attempt.

Soylu acknowledged the country was struggling against “many elements” trying to compromise its fight against terrorism.

Turkey is a partner in the U.S.-led coalition against the ISIS terrorist group and its armed forces are active in neighboring Syria and Iraq. It is also facing a renewed conflict with an outlawed Kurdish movement in the southeast.

Turkey’s pro-Kurdish People Democratic Party, or HDP, issued a statement “strongly condemning” the attacks and saying it “felt great sadness and shared in the sorrow.”

Turkish authorities, particularly the president, have routinely accused the party of being linked to the PKK and backing terrorism. The party, which had both of its leaders detained in terror probes and multiple elected officials arrested or removed from public service in the southeast, denies the charge.

The chair of the main opposition Republican People’s Party also issued a statement condemning the attack.

Ned Price, a spokesman for the White House National Security Council, said Washington condemned the attack in “the strongest terms.”

“We stand together with Turkey, our NATO Ally, against all terrorists who threaten Turkey, the United States, and global peace and stability,” Price said.

The Besiktas sports club “strongly condemned” the attack and said a store employee was among the fatalities as well as a security official. Bursaspor issued a statement wishing “a speedy recovery to our wounded citizens.”

“Violence has no place in a democratic society,” Hahn wrote on Twitter.

The U.S. Consulate General in Istanbul urged its citizens to avoid the area in Istanbul, which is also home to a Ritz Carlton hotel.

Turkey’s radio and television board issued a temporary coverage ban citing national security concerns. It said “to avoid broadcasts that can result in public fear, panic or chaos, or that will serve the aims of terrorist organizations.”