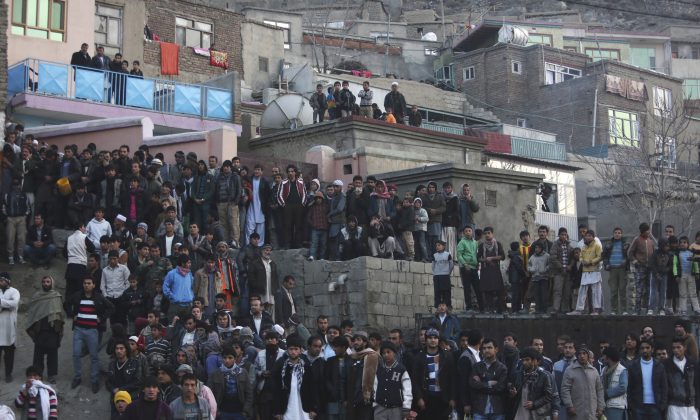 KABUL, Afghanistan—Three separate Taliban attacks killed at least 19 people in Afghanistan on Saturday, including a senior judicial official and personnel working to clear one of the most heavily mined regions of the world.

The attacks came amid a spike in violence just weeks before the international military mission in Afghanistan comes to an end on Dec. 31., 13 years after the September 11 attacks sparked a U.S.-led invasion to rid Afghanistan of the Taliban’s extremist regime.

As the Taliban insurgency vows to maintain its current campaign against government, military and foreign targets, the attacks have sparked tight security in Kabul and concerns among Afghans that the situation can only worsen after foreign forces have transitioned to a support role from Jan. 1.

The U.S. and NATO will leave around 13,000 troops in the country, with sliding reductions over the coming two years. With the end of NATO’s International Security Assistance Force, the residual troops are meant to offer training and support to Afghan security forces that have been leading the anti-insurgency fight while suffering record casualties since the middle of last year.

President Ashraf Ghani made it clear during recent overseas trips that he believes Afghanistan needs ongoing financial and military support as the insurgency intensifies and spreads.

“We are not yet able to do everything alone. Your continued support will, therefore, be key in ensuring that our collective gains of the 13 years will be enduring,” Ghani told NATO foreign ministers in Brussels earlier this month.

U.S. President Barack Obama’s decision to extend the remit of the U.S. troops remaining in the Afghanistan, allowing them to conduct anti-terrorist operations against the Taliban as well as al Qaeda, and to provide combat support as necessary, also tacitly acknowledges the security challenges the country faces.

The Taliban claimed responsibility for the Saturday attacks, as well as one late Friday in which two American soldiers were killed, according to an international military official who spoke to The Associated Press on condition of anonymity as the information wasn’t authorized for release. The soldiers died when a suicide bomber targeted their convoy near the Bagram air base, outside Kabul in Parwan province.

Their deaths took to 65 the total number of international troops to die in Afghanistan this year, 50 of them Americans. Some 3,500 foreign forces, including at least 2,210 American soldiers, have been killed since the war began in 2001. By comparison, Afghan security casualties spiked 6.5 percent this year, with 4,634 killed in action by the end of September.

He said the attack was most likely carried out by a suicide bomber on foot. Eyewitnesses said the bus was a totally destroyed by fire.

Hashmat Stanekzai, spokesman for the Kabul police, said a total of 18 people were wounded, soldiers and civilians.

Early Saturday, gunmen shot dead Atiqullah Rawoofi, the head of the court’s secretariat in Kabul’s northwestern suburbs, said Farid Afzali, chief of the Kabul police criminal investigation unit. Rawoofi was walking from his home to his car on his way to work when he was shot dead by militants, he said.

Obaid identified the company working on the project as Star Link. An employee of Star Link, who spoke on condition of anonymity as he was not authorized to speak to journalists, said that the number of dead could be higher.

Mohammad Din, a Star Link manager, separately said 81 workers were at the site when the gunmen arrived.

Afghanistan, which has suffered decades of continuous war, is one of the most heavily mined countries in the world. The nonprofit Halo Trust estimates some 640,000 mines have been laid there since 1979 and at least 20,500 people have been killed and wounded by such ordinance since.

Those working on projects to clear mines are often targeted by the Taliban and other insurgents in the country. In April, Taliban fighters killed 12 people working on a mine-clearing project in Logar province, south of Kabul.

Ghani condemned the attack on the mine-clearing personnel, calling it inhuman and un-Islamic. “It’s the work of the enemies of Afghanistan,” he said in a statement.

The president has rarely made public comments about the violence though he is often pictured visiting the wounded and bereaved in the aftermath of deadly attacks.

He has been criticized for referring to the Taliban as “political opponents” and is pursuing a foreign policy strategy aimed at pressuring Pakistan to curtail its support of insurgent groups that enjoy the protection of its intelligence services.

His decision to sign bilateral security agreements with Washington and NATO, allowing an enduring military presence, has been identified as one reason for the aggravated violence, angering insurgents and their sponsors who had hoped to see an end to foreign participation in the war as it drags on for at least another two years.

From The Associated Press. AP writer Mirwais Khan in Kandahar, Afghanistan, contributed to this report.