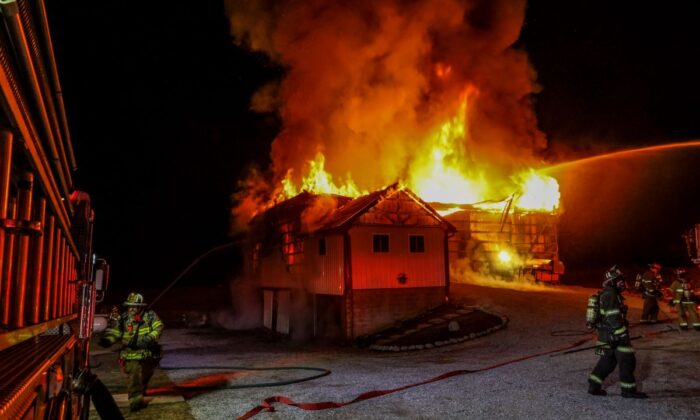 "We’re taught to help each other."
By Beth Brelje

Fire truck sirens and a glowing light in the distance caught Ely Fischer’s attention while he was at a worksite Thursday night, building a deck in Lancaster County, Pennsylvania.

“We thought, that’s in our general home area, so we wondered who the neighbors are that have a barn fire or something,” Fischer, who is Amish, told The Epoch Times.

He decided to head home, about a mile away. As he got closer, he realized it was his own barn, which houses 12 horses, a steer, two sheep, chickens, turkeys, and about 30 little guinea pigs. Hay was stored throughout the barn, including the loft upstairs, to feed the animals through the winter.

“The first thing I thought of was the horses underneath, and the children, but they had all been rescued already,” said Fischer, a father of nine. Counting his wife, they are a family of 11.

Neighbors from nearby farms rushed over to help. All animals survived except the turkeys that had been up in the loft. The surviving animals were placed in a fenced pasture. By the time Fischer got home, the roof of the 40-foot by 60-foot barn was destroyed, and the barn was fully engulfed in flames, just 100 feet from the family home.

More than 20 all-volunteer fire departments responded, and it took nearly two hours to get the fire under control, Maytown Fire Company Assistant Chief-3 Brock Miller told The Epoch Times. The farm is on a rural road with no fire hydrants, so firefighters laid out hose that connected to tanker trucks with water, Miller said. When one truck is empty, anther water truck moves in.

Fischer is not sure how the fire started. He said two of his sons were in the loft throwing hay down to the ground level for the horses, when they noticed some hay in the loft was burning.

“The second oldest of the boys, he ran inside, told mom. She sent the oldest daughter out to put the call in, and ran out to the barn to get the horses out. They didn’t want to come out right away,” Fischer said. A neighbor arrived and helped move the horses to safety.

This is the second time the farm lost a barn on this site. Five years ago, an intense windstorm destroyed the barn. Fischer’s Amish community rebuilt it. And before the night was over, he had assurances that they would do it again.

Twelve hours after the fire started, at 7 a.m., that’s when horse-drawn buggies and vans full of workers started to arrive, as well as about 45 people including some women to help prepare lunch. The Fischers set up long tables in their basement for folks to eat.

The workers cleared debris from the fire first thing in the morning, and within hours, were framing the new barn. The hay on the floor protected the floorboards, so they had something to work with.

“I didn’t make a single call for supplies,” Fischer said. “Everybody just dropped what they were doing and pitched in. It is amazing.”

When Fischer thinks about his community arriving on his farm that morning, he gets emotional and his gratitude is apparent.

“We’re taught to help each other. The Bible teaches us to help each other. When storms or fires or things happen, we drop what we are doing and go help.” He has helped in similar situations but says he feels a stronger obligation to help in the future, because he understands what it is like to have a fire.

He adds that the rebuilding efforts would not be possible without the businesses that set aside their work to put fire and storm victims first.

“We need 16 trusses, they’re being made now,” Fischer said. “The truss company shoved everything aside. They are making the trusses. They should be here soon.”

The Amish do not buy insurance coverage so they don’t have to wait for an insurance company to make an appraisal.

“While it’s fresh in everybody’s mind they are here, and quick it’s done.”

Fisher estimates the barn that was burnt on Thursday will be fully replaced by Monday.