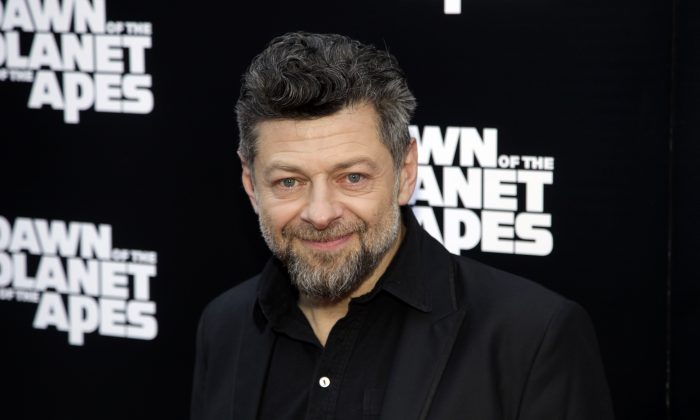 Actor Andy Serkis attends a screening of "Dawn of The Planet of The Apes" on Tuesday, July 8, 2014, in New York. (Photo by Andy Kropa/Invision/AP)
Entertainment

But Serkis, who is not well known by appearance, is the face behind all the beloved characters like King Kong, Gollum, and Caesar, the evolved ape who will take to the screen again this weekend in “Dawn of the Planet of the Apes.”

Although his roles have not granted him renowned fame, or an Oscar, Serkis says that to play  characters through performance capture has been the most rewarding experience.

“This is just the most amazing, liberating tool,” Serkis said during a “Meet the Actor” series at the SoHo Apple store on Tuesday July 8, 2014.

Serkis feels most liberated by the fact that no matter his race, sex, or background, filmmakers will cast him based on his ability to perform and vocalize the specific characters.

In terms of being able to portray emotions and interacting with other characters, Serkis said performance capture is not much different than live acting.

“It’s just a difference between cameras that are recording you, the process is the same,” he said. In fact, Serkis enjoys the distance it gives him when interacting with other characters on screen.

Motion capture, however, is a challenging ordeal where the actors need to shoot for hours in a skin-tight body suit, their face covered with dots and a camera hanging off your head. Exact facial expressions play a large role for these actors, but according to the British actor motion capture roles are still misunderstood, even among actors.

“My wish is that its fully understood… how truly liberating it is,” Serkis said.

Serkis will also have a role in the upcoming “Avengers: Age of Ultron” sequel as well as “Star Wars: Episode VII.”