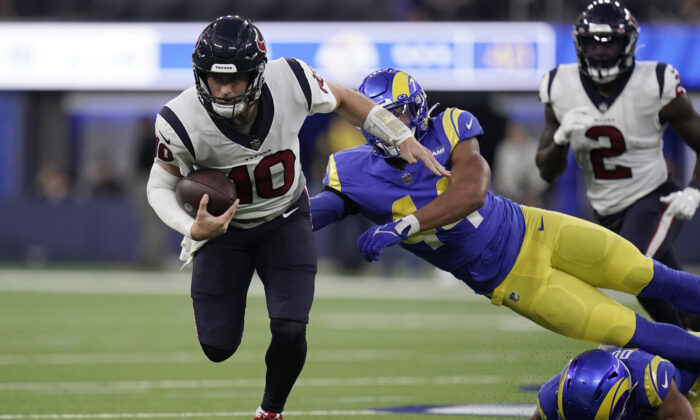 INGLEWOOD, Calif.—Davis Mills’ first 5 1/2 drives went nowhere in a first half filled with frustration and inaccuracy for the Houston Texans and their starting quarterback.

Then Mills and his receivers beat the halftime clock with two exceptional connections that sent the rebuilding Texans back home with a flash of optimism for the future.

Mills threw an 18-yard touchdown pass to Nico Collins with one second left in the first half, salvaging something good from an up-and-down performance in Houston’s 24–20 preseason victory over the Los Angeles Rams on Friday night.

Mills is expected to be the Texans’ leader again this season after he started 11 games as a rookie, but Houston’s offense didn’t click much against the Rams’ second- and third-stringers until those final two throws. The Texans had only 31 net yards of offense with 14 seconds left in the first half.

And then Mills promptly picked up 50 of his 96 yards passing on two thrilling completions.

“It was awesome,” said Mills, who went 10 for 17. “Obviously made some big-time plays. Didn’t have much going on before that, so it was nice to end the half with a score. …We’re confident when we’re spreading the ball around like that and the O-line is protecting, we can go up against anyone.”

Phillip Dorsett made a 32-yard sideline grab while getting hit illegally by rookie Russ Yeast, and Collins then made an equally impressive TD reception in tight coverage from rookie Derion Kendrick.

“We wanted to see (Mills) finish there offensively,” Houston coach Lovie Smith said. “That was a great throw by Davis to give Nico an opportunity to catch the ball. We’re not first-game-of-the-season-ready yet, but we see good things each week.”

Mason Schreck caught an 8-yard touchdown pass with 1:05 left from third-string quarterback Jeff Driskel, who has kept the Texans unbeaten in the preseason with late TD drives in both games–this one aided by a 46-yard pass interference penalty by the Rams’ fourth-string defense.

“Two weeks in a row where offensively we needed to score, and defensively we need to stop them at the end,” Smith said. “I talk a lot about situational football and how we love as many of these opportunities as possible.”

While Rams coach Sean McVay stuck to his six-year strategy of playing as few important regulars as possible in the preseason, Mills was among several presumptive regular-season starters who suited up for the Texans.

“I was really pleased with the defense in the first half, with the exception of that two-play sequence,” McVay said. “Overall, a lot of good things to be able to look at.”

Roger Carter Jr. scooped and scored for the Rams on a fumbled punt return in the third quarter, and Trey Ragas rushed 7 yards for a go-ahead TD with 5:11 to play.

John Wolford passed for 142 yards for the Super Bowl champions despite getting sacked five times while playing the first half.

“It’s part of the game,” Wolford said. “Those guys are battling up front, and (the Texans) have got their 1’s in, and (the offensive line) is doing the best they can. We knew that going in, and I think we did a good job, all things considered.”

Texans rookie Teagan Quitoriano caught a TD pass from backup QB Kyle Allen early in the third quarter, but the Rams replied moments later when Duron Lowe forced Chester Rogers to fumble on a punt return and Carter returned it for a score.

Bryce Perkins played the second half for LA, going 11 of 13 for 124 yards. Undrafted rookie Lance McCutcheon had his second straight big game with five catches for 96 yards, but he couldn’t get out of bounds on his 27-yard catch-and-run deep into Texans territory on the final snap of the game.

Mills didn’t back down after telling NBC Sports earlier this week that the Texans are “ready to go out and shock the world” this fall.

“I don’t think I need to elaborate on it,” Mills said. “I don’t think the media nationally is giving the Houston Texans a lot of attention. I think we know better than anyone else in the building. Our guys have full confidence in what we’re capable of, and we’re excited to get rolling with this season.”

Wolford is the Rams’ presumptive backup QB for the third straight year, but Perkins might be playing his way into a competition. Wolford finished 14 for 22, but didn’t lead a TD drive.

Wolford rarely got set in the pocket, but he completed six passes to Brycen Hopkins, the tight end who stepped up in place of injured Tyler Higbee and made four catches in the Super Bowl after barely playing in the regular season.

Rams rookie offensive guard Logan Bruss injured his right knee. He returned to the sideline in the second half wearing a brace. McVay didn’t have an update, but said: “It didn’t look like it was good, though.”

Bruss, a Wisconsin product chosen in the third round, was the Rams’ highest pick in the last draft.