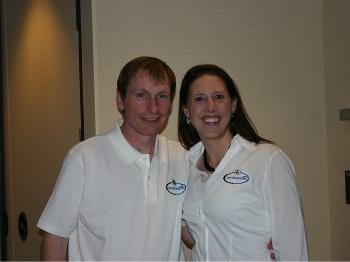 A Company That Doesn’t Fit the Mold

Sharon Kilarski
Sharon writes theater reviews, opinion pieces on our culture, and the classics series. Classics: Looking Forward Looking Backward: Practitioners involved with the classical arts respond to why they think the texts, forms, and methods of the classics are worth keeping and why they continue to look to the past for that which inspires and speaks to us. To see the full series, see ept.ms/LookingAtClassics.
View profile
Follow
biggersmaller
Print
When you think of a family-owned business, an international venture usually doesn’t come in mind.

But that’s exactly what Davis Business Solutions, Inc. (DBS) is. As president and co-founder, Jennifer Davis puts it: “Our competitors are multi-billion dollar, international corporations. At conferences, they don’t know what to make of us.”

Owners and Company Grow up Together

The husband and wife team Jennifer and Daniel Davis started DBS when she was 17 and he was 22. She had just finished high school; they had just met, and he asked her to help write documentation and test the software he was developing for his brother’s HVAC business. This was the summer of 1988.

“By the fall the pair had a marketable software solution for the HVAC industry,” according to the latest DBS conference manual.

At first the pair held day-jobs and worked on the software in the evenings. When Jennifer started college at the University of Wisconsin, they would mail floppies back and forth in order to continue the software development. She was the only student she knew at the time to have a computer in her dormitory room.

A big year for both DBS and the couple came in 1992. She finished college and they married. DBS broke into the food service industry, and it hired staff on a telecommuting basis, being one of the first companies to allow employees to work from home. Jennifer also decided to give up the idea of teaching kindergarten, her undergraduate intention.

In 1994, as the staff grew, so did the need for office space, and the business moved to a real office in Lombard, Ill. DBS also opened the market to the petroleum equipment industry. But just as the company grew, so did their family, and the new office seemed to have as many computers and desks as playpens and toys.

Just as Daniel has always stuck with software development, the roles that Jennifer undertook changed as the company and its business changed. She moved from documentation and testing to training customers. This job demanded that she travel extensively, often with a baby or toddler in tow. After the 9/11 terrorist attacks, she reassessed the idea of traveling so much with young children—and began to do sales instead.

In 2004 the company finally made a success of outsourcing overseas. DBS could no longer sustain its payroll costs. The five initial employees at its venture in India, Davis Software Solutions, Pvt. (DSS) expanded to 40 over the next four years.

The latest change for the company came in 2008, with its release of GlobalEdge Software. GlobalEdge combined the existing features of its software package with SQL tools to develop a comprehensive program that includes faxing, GPS, field service, and document imaging.

Doing Whatever it Takes

In looking back over 20 years of business, Jennifer attributed her company’s success to her husband’s undying determination, their collective energy and ingenuity, or, in business lingo, “the ability to think outside of the box.”

The company survived and grew because it did whatever it took to make things work.

“We made this company work with the same kind of mindset that the pioneers or immigrants had in the 1800s and 1900s. They lived a dream when they moved West or came to this country. They were willing to give up everything to make that dream a reality.”

“I have babysat employees’ kids in order to make it work. When my nine-year-old was punished yesterday, he had to spend the day here—at the office. We do whatever it takes to make this work,” she said.

When Jennifer was traveling as software trainer all over the country with one of her children, she depended on her extended family and friends to act as babysitters in all the cities she visited.

“People today talk about risk-taking, but they don’t really know the full meaning of that term,” she said. “We risked everything, our futures, our money, our marriage.”

“Take the term ‘venture capital,’ today businesses don’t even start without capital to back their plan. We had no capital. We had nothing. Recently, we had a financial planner assess us and learned that we are $4 million underwritten. He didn’t know what to do with us. We don’t fit into any business category,” she said.

Despite the worldwide financial troubles this year, DBS made money. “It was a good year,” Jennifer said.

She acknowledges that things have changed due to the environment. “We are more fearful now. We work two-times as hard to make one half the money.” She summed up the situation by saying that sales have been hurt, but primary costs have decreased.

In order to make things work in this tougher financial environment, the couple now travels with their trade show booth instead of shipping it, they rent a car instead of taking a limo, and they are dropped off at the airport instead of relying on remote parking.

In giving advice to new businesses just getting started she suggests a plan that protects all three points of a triangle—the business itself, the employees, and the owners.

“We put our employees first, our company second, and ourselves last.

“We gave our company away. We offer 100 percent health care for employees. They pay no deductable. Once we started this policy, we could not go back on it. We did this because we felt so grateful to our employees. But I would suggest that a new company consider all three aspects and care for them all equally.”