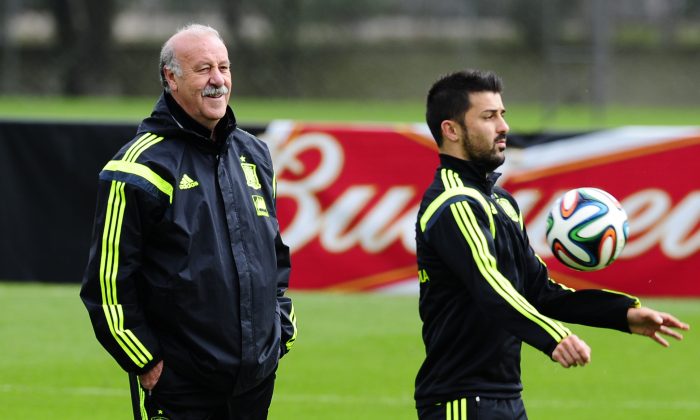 David Villa, the Spanish forward, scored a brilliant goal against Australia in the World Cup.

The goal put Spain up 1-0. Another goal from Fernando Torres came in the 69th minute to put them up 2-0

Villa scored the goal during the 36th minute of play.

Spain and Australia are both officially out of the tournament and are playing their final matches.

Later, Villa was seen crying on the sidelines after he was subbed out of the match.

AP: Villa gets nod in last Spain match vs. Australia


CURITIBA, Brazil (AP) — David Villa was selected to start his last international match for Spain, which made seven changes to its starting lineup to face Australia in a World Cup Group B match between two teams already out of contention in Brazil.

Villa was aiming to add to his record tally of 58 goals in his 97th — and final — appearance for Spain, which exits after a disappointing World Cup defense that opened with losses to Netherlands and Chile.

Defenders Raul Albiol and Juanfran Torres, midfielders Santi Cazorla and Koke, and striker Fernando Torres were all starting for the first time in Brazil.

Midfielder Cesc Fabregas, who has played just 12 minutes in Brazil, was left on the bench following a training ground spat with coach Vicente del Bosque.

Adam Taggart replaces suspended forward Tim Cahill in the Australia lineup, with Oliver Bozanic slotting in for veteran midfielder Mark Bresciano. That leaves the Socceroos without two of their most seasoned players for their last game of the tournament.