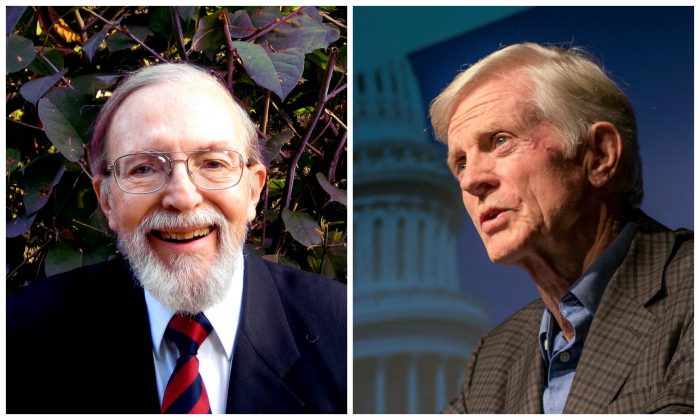 We agree to disagree

For over five years, David T. Jones (retired U.S. diplomat) and David Kilgour (retired Canadian Member of Parliament)—aka “David J” and “David K”—have written on-the-one-hand; on-the-other hand, every two weeks columns for The Epoch Times.  We have addressed the major issues of our days, both domestic and foreign. The purpose has been to present challenging commentary and observations employing engaging, imaginative (but mutually respectful) prose.

We have taken a unique approach.  In coordination with our editor, we have systematically determined and agreed upon a topic of the day, sometimes domestic and sometimes foreign policy or international relations.  The topics are such that normally there is room for both a “liberal” and a “conservative” point of view.  To a degree, observations and judgments also reflect our national political attitudes.  However, after agreeing on the topic, there is no further communication between David K and David J—until the columns are published.

Thus, there are no “shouting heads” (even in print).  Occasionally, our views were closely coincidental; mostly they varied either vigorously or tangentially.  Agreement was coincidental rather than calculated.  Sometimes, we were even surprised that we agreed!

Due to the every-two-weeks approach to the columns’ publication and our desire to address “topical” material, there was no concentration on specific subjects for more than short periods (U.S. and Canadian elections).  We returned to some obvious topics in foreign affairs repeatedly (the Middle East, North Korea, and Ukraine) but not in a manner that one could see a specific evolution of or consistency in our thinking reflecting the sporadic every-two-week publication cycle.

We believed, however, that our commentary was more than transient in value.  We believed that in toto it would provide useful material for students of government and politics in the United States and Canada, and observers of international relations wherever.  Primarily, however, we did not want our work to vanish into the “cloud” whereupon everything continues to exist—if you can find it.

We believe that we were successful with the every-two-week approach, but now offer a selected set of our columns along with ancillary, stand-alone articles separately written by David J and David K, but hopefully in the same informative and provocatively engaging manner.  At times we will note ancillary comment on individual columns to show evolving thinking—or if we were just plain wrong in our judgments.