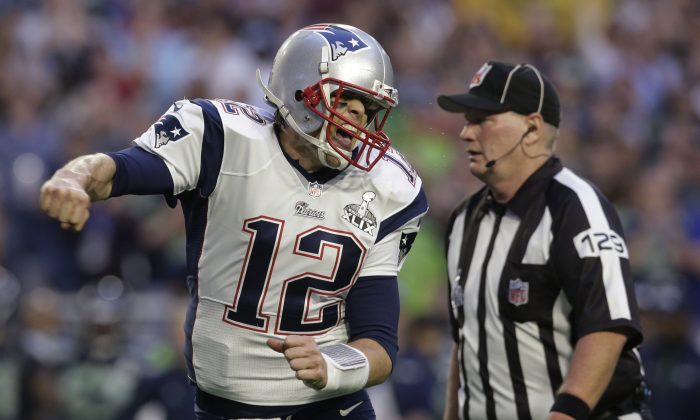 Kearse caught the ball after bobbling it while on his back with a minute to go in the fourth quarter.

GLENDALE, Ariz. (AP) — Tom Brady’s fourth touchdown pass was a 3-yarder to Julian Edelman with 2:02 left in the fourth quarter, giving the New England Patriots a 28-24 lead over the Seattle Seahawks in theSuper Bowl on Sunday.

Down 10 to start the fourth, Brady rallied the Patriots with a 5-yard TD pass Danny Amendola in the back of the end zone and another one to Edelman.

With the Seahawks leading 24-14, the Patriots’ defense held as Rob Ninkovich sacked Russell Wilson to force a punt. After Brady was sacked on the first play, he drove the offense 76 yards to get New England within a field goal. Brady’s scoring strike to Amendola gave him a Super Bowl record 11 TD passes. Brady also set aSuper Bowl record with 37 completions.

Brady led the Patriots 64 yards on 10 plays for the go-ahead score as New England inched closer to its fourthSuper Bowl title.

Wilson threw a 3-yard touchdown pass to Doug Baldwin after Brady’s second interception of the game and the Seahawks took a 24-14 lead over the Patriots going into the fourth.

Unknown receiver Chris Matthews had a breakout game in the first three quarters, making his first four career catches for 109 yards. Matthews, a cousin of Hall of Fame defensive end Reggie White, played in just three games before he made the crucial onside kick recovery in the NFC title game against Green Bay.

His first catch was a twisting 44-yard reception over Kyle Arrington to the Patriots 11. Two runs later, Marshawn Lynch scored on third-and-goal from the 3. Matthews’ next catch was an 11-yard TD with 2 seconds left in the second quarter. He had a 45-yard catch on the first series of the third quarter to set up Steven Hauschka’s 27-yard field goal for a 17-14 lead.