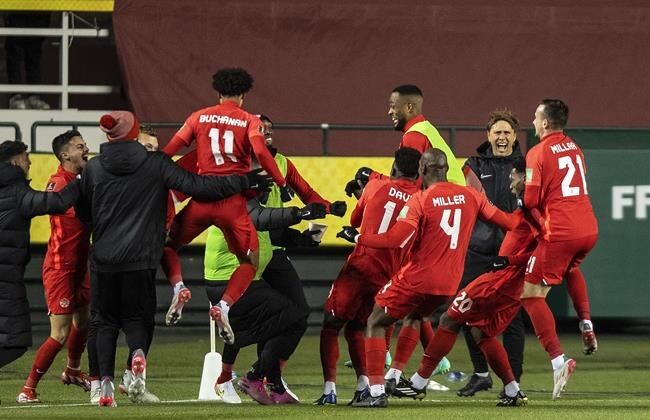 Striker Jonathan David had a game-breaking moment, and it made for a memorable occasion. His 57th-minute goal lifted Canada to a 1-0 win over Costa Rica in a World Cup qualifier in front of 48,806 fans at Commonwealth Stadium.

The goal came after Costa Rican goalkeeper Leonel Moreira fumbled a cross into the penalty area, leaving David to slot the ball home.

With the win, Canada remained in third place in CONCACAF’s Octagonal. Canada has 13 points from seven matches (3-0-4) while Costa Rica fell to 1-3-3. Mexico and the United States top the table with 14 points each.

Canada hosts Mexico on Tuesday at the same venue.

“We’re one point out of first, and we know what our ambitions are,” said fullback Sam Adekugbe, the Calgarian who Herdman identified as the man of the match.

The top three teams in the standings will earn berths for next year’s World Cup in Qatar. The fourth-place team will take part in an intercontinental playoff.

Moreira started for Costa Rica because of an injury to regular starter Keylor Navas of Paris St-Germain.

The goal came minutes after a leaping bicycle kick by Canadian winger Tajon Buchanan froze Moreira in his tracks, but the ball hit the bar – the second time the Canadians found the woodwork in the game.

The first close call came in the 15th minute. A corner kick from hometown hero Alphonso Davies went into a scrum of Costa Rican defenders and ricocheted off the crossbar.

The game marked the first time Davies played a competitive game in Edmonton since his early teens. Many of the fans were there to welcome him home, and Canada Soccer announced the crowd was the third largest for a men’s national team game played on Canadian soil.

“The atmosphere was electric, absolutely electric,” said Herdman. “The big moments in the game, the fans were with us for all of them.”

But throughout the first half, the Bayern Munich star was regularly crowded out by two or three defenders each time he got close to the ball. He did get a look at goal in the 15th minute, but his shot was blocked thanks to a sliding effort from defender Oscar Duarte.

Davies had another chance in the 66th minute, but he blasted a shot over the bar. Herdman was quick to defend his star player when asked if Davies was trying to do too much in front of the home fans.

“The one thing fans want is Phonzie on the ball,” he said. “The other thing they want him to do is dribble. I’m not going to take that away from him.

“On a night like this, let him have his moment.”

Herdman guaranteed fans will see a much better version of Davies in Tuesday’s home match against Mexico.

“We came into this game with a plan to win this game,” Costa Rican coach Luis Fernando Suarez said via a translator. “One of the things we have to improve on is our offence. We missed our chances when we had the ball.”

Seconds later, Salas was in the mix again. The majority of fans in attendance bayed for American referee Ismail Elfath to award a penalty after Salas brought down David in the box, but Elfath waved off the appeals. David was played in by a great through ball from Adekubge.

“We are a brotherhood here,” said Adekugbe. “We sacrifice ourselves for the shirt.”

Twice in the first half, the teams came together in scrums after fouls, adding a bit of heat to the encounter in the chilly 1 C weather.

The first came after Canadian defender Richie Laryea earned a yellow card for kicking out at Costa Rican attacker Jewison Bennette. Then in the 23rd minute, Bennette returned the favour, getting a yellow after another altercation with Laryea.

Herdman admitted that Canada got out its rhythm after the scuffles, and that Costa Rica was successful in playing a low block and slowing the game down with lots of restarts.

The majority of the Costa Rica team had an extended training camp ahead of the game, while the Canadian team got together in Edmonton earlier this week.

“That was a stubborn Costa Rican team that was training for 10 days at home,” said Herdman.

Canadian defender Steven Vitoria also saw yellow in the first half. Ricardo Blanco got a yellow in the 70th minute for a foul on Buchanan.

Ike Ugbo made his debut in a Canada jersey, coming in as an 82nd-minute substitute. Ugbo, a former England youth international, declared his intent to play for Canada last week.