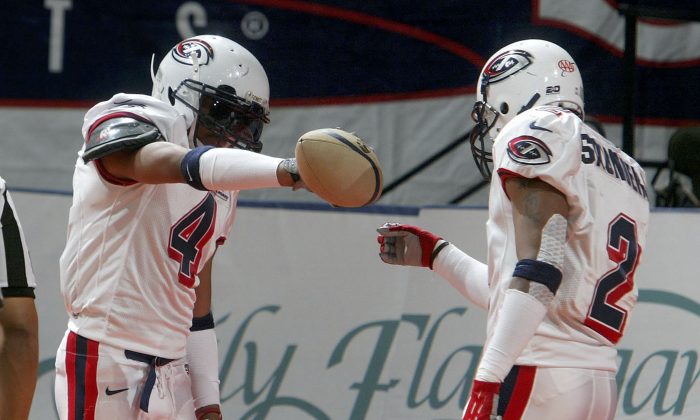 B.J. Barre #4 of the Columbus Destroyers celebrates his touchdown against the New York Dragons by pretending to pour a drink for teammate David Saunders #2 during their Arena Football game on March 3, 2006 at the Nassau Coliseum in Uniondale, New York. (Jim McIsaac/Getty Images)
US

Investigators say the deceased man was upset with Saunders, who is reported to be his girlfriend’s personal fitness instructor.

Saunders had parked behind Whole Foods shortly before 10:30 a.m. when deputies say the deceased man approached him and pulled out a eight-inch kitchen knife as his girlfriend stood nearby.

The two men began struggling and investigators say one round was fired from a handgun in Saunders’ possession. Saunders has not been charged, pending the outcome of the investigation. The former Storm player told officials he shot the man in self-defense, reported TBO.com

The deceased man has not yet been identified.

Saunders played for the Storm from 2002 through 2005, in addition to several games in 2008. Overall, he played in the Arena Football League for eight seasons. He also played football in college for the University of West Virginia, where he still holds several receiving records.