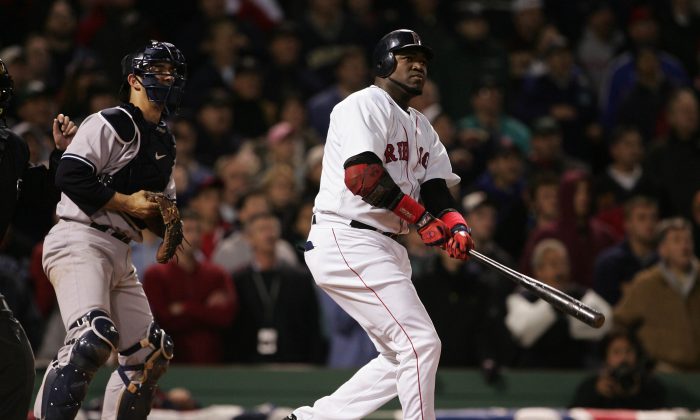 David Ortiz (R) was at his best when it mattered most, leading the Red Sox to three World Series titles. (Doug Pensinger/Getty Images)
Baseball

Baseball great David Ortiz is apparently retiring after the 2016 season. When he does, MLB will be saying goodbye to one of the greatest clutch hitters of all time.

“Big Papi” may have 503 career home runs in the regular season, but it’s his postseason heroics that have made him the star he is today. The nine-time All-Star was part of three World Series-winning teams in Boston—and his clutch-hitting proved to be a big part of those achievements.

2003 ALDS Game 4; 8th inning game-winning double: Boston was facing elimination down 2–1 in the series to the A’s and trailing 4–3 in the eighth with two on and two outs when Ortiz—in his first season with the Red Sox—mashed a double off Oakland closer Keith Foulke to right field to score two. Boston would win the game and eventually take the series with a Game 5 victory.

2008 ALCS Game 5; 7th inning three-run home run: This one’s a forgotten one among his many playoff blasts (17 in all) but it started a comeback against Tampa Bay. Down 3–1 in the series and 7–1 in the seventh, Ortiz brought the Red Sox within three with this shot off Tampa Bay’s Grant Balfour. Boston would rally to win Games 5 and 6 before falling in the winner-take-all Game 7.

2013 WS Game 4; 5th inning double: Ortiz hit a leadoff double here and would eventually score to tie the game at one. But it was actually his subsequent dugout speech afterwards that made the highlight reel and is credited for Boston’s turnaround against St. Louis. Down 2–1 in the series, the Red Sox would rally that same inning to take the lead and never surrendered it again, topping the Cardinals in six games.

2013 ALCS Game 2; 8th inning Grand Slam: The Red Sox were down 5–1 in the eighth when Ortiz cleared the bases with this two-out blast off Detroit’s Joaquin Benoit that tied the game. Boston would win it in the 9th to tie the series at one game apiece.

2004 ALCS Game 5; 8th inning solo home run: Every run in games 4 and 5 here were especially crucial to the Red Sox. After being embarrassed in the first three games of the set, they had to win to make it to the World Series. Ortiz’s solo shot here off  Yankees reliever Tom Gordon cut the lead to 4–3 and brought the Fenway crowd to their feet. It wasn’t his only big hit of the day though …

2004 ALCS Game 5; 14th inning walkoff single: Ortiz’s two-out RBI single to center off Yankees reliever Esteban Loaiza scored Johnny Damon to beat New York in extra innings for the second straight game and thrill all of New England. The momentum from the win would serve them well in Yankee Stadium as the Red Sox would take both games 6 and 7 to win the pennant.

2004 ALCS Game 4; 12th inning walkoff home run: This was the shot that put him on the map and made him a household name overnight. Down 3–0 in the series to their hated rival Yankees, Ortiz kept Boston alive in the series with this game-winning blast off Paul Quantrill that electrified the crowd and the team.