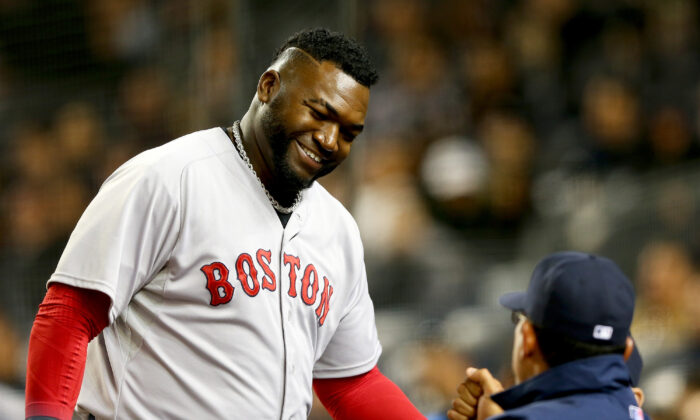 David Ortiz (34) of the Boston Red Sox celebrates after he scored a run in the fourth inning against the New York Yankees, at Yankee Stadium in the Bronx borough of New York on April 12, 2015. (Elsa/Getty Images)
Crime and Incidents

Private investigators hired by retired Boston Red Sox slugger David Ortiz say the Hall of Famer was targeted by a drug kingpin when he was shot in the Dominican Republic in 2019, a news report said Saturday.

Former Boston police commissioner Ed Davis and ex-CIA official Ric Prado said Cesar “The Abuser” Peralta put a price on Ortiz’s head because he was jealous of the baseball superstar’s fame on the island, The Boston Globe reported.

The findings by Davis and Prado contradict the official investigation by Dominican authorities, who said the shooting was a case of mistaken identity.

“I accept what Ed and Ric are telling me, but how come no one in the Dominican justice system has told me this is how it went down?” Ortiz told the Globe.

Peralta was operating freely in the Dominican Republic when Ortiz was shot at a bar in Santo Domingo on June 9, 2019. He was arrested in Cartagena, Colombia, in December 2019, and is now in a federal prison in Puerto Rico awaiting trial on charges of conspiring to import drugs.

Authorities allege Peralta ran a cocaine and heroin smuggling ring through the Dominican Republic to the U.S. and other nations. Two months after the Ortiz shooting, several of his associates, including two ex-MLB players, were arrested in the island nation.

Peralta claimed that he and Ortiz were close friends, the Globe reported. Ortiz said they only had a casual relationship.

Ortiz was shot in the back at point blank range.

The investigators said video showed the shooter pointing his gun at Fernandez after pumping the shot into Ortiz, but the gun jammed.

The private investigators said Dominican authorities didn’t want to implicate Peralta because he had ties to government officials, who would’ve been exposed as corrupt if Peralta started talking to police.

According to Dominican authorities, the shooting was masterminded by Luis Alfredo Rivas-Clase. He was shot dead in September 2021 while on the run. Several other men connected to the shooting are awaiting trial. Peralta is not among them.

Davis and Prado said Dominican investigators did not cooperate with their probe.

“To be honest, when you live in a country where justice is corrupted, you want to believe (what the government alleges) but you also will disagree, and that was what was going on at the time,” Ortiz told the Globe.