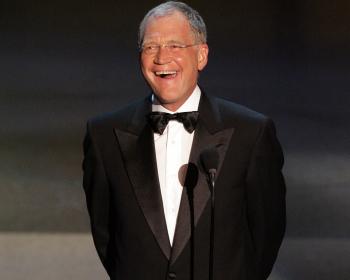 David Letterman the Late Night TV Show Host, at the 57th Annual Emmy Awards September 18, 2005. Letterman will have a switch of roles as the person being interviewed on the talk show 'The View.' (Vince Bucci/Getty Images)
Entertainment

David Letterman to Appear on ‘The View’

Alex Johnston
View profile
Follow
biggersmaller
Print
David Letterman will make an appearance on ABC’s The View next month. Rare is it for this CBS host to serve as a guest rather than a host for a talk show.

Letterman’s first appearance on the program on Sept. 7 will mark the start of the show’s 14th season, which will see the return of host Barbara Walters after she underwent surgery on a heart valve, according to the talk show's website.

"Fourteen seasons is quite an accomplishment, considering I wasn’t sure at the beginning if we’d last 14 weeks,” said The View's Executive Producer Bill Geddie in a press release. "As fall approaches, we set our sights towards another political season with an emphasis on women in politics. This is a season not to be missed."

Letterman has been a guest on The Oprah Winfrey Show and Live with Regis and Kelly.

The 63-year-old Letterman has been hosting his CBS show Late Night with David Letterman since 1983. He recently signed a contract with television network, which will keep him with the show until 2012.