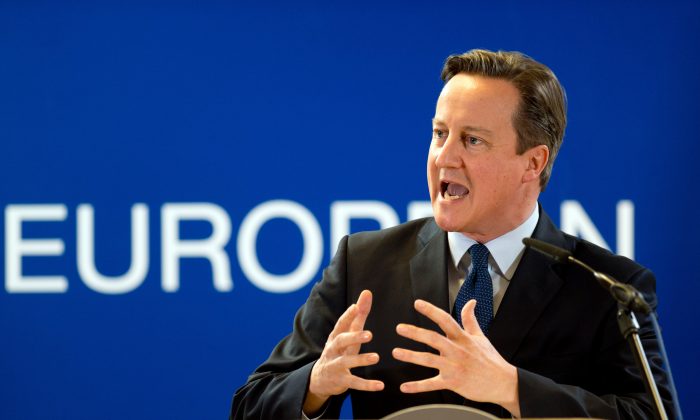 British Prime Minister David Cameron at a press conference as part of an extraordinary council at the EU headquarters in Brussels on Dec. 17, 2015, after a leaders summit. (Alain Jocard/AFP/Getty Images)
Opinion

David Cameron has called his four key demands for reforming the EU’s relationship with the U.K. a “battle for Britain.” And at last. he has been able to fight it in person—albeit over a dinner of chicken terrine and venison, where the EU member state leaders had their first collective chance to discuss the U.K.’s demands.

The agenda of the European Council dinner in Brussels was to “discuss the state of play” and address political issues before a concrete proposal. None of the four issues Cameron is campaigning on are easy to tackle, politically or legally; they go to the heart of what makes the EU what it is, and even what it was before the U.K. even joined in 1973.

None of the four issues Cameron is campaigning on are easy to tackle, politically or legally; they go to the heart of what makes the EU what it is.

And while the dinner seems to have gone amicably enough, the statements that came out of it were rather equivocal. Translated into official language, the conclusions refer to a “substantive and constructive debate” on finding “mutually satisfactory solutions” to the U.K.’s demands.

Cameron’s tone at the late-night post-dinner press conference backed away from wartime analogies and toward the language of compromise used by other leaders. “Good progress” had been made toward agreement, he said.

It sounded positive enough. But what does it mean?

The British government has a lot of work to do and not very much time to do it. In constitutional terms, seeking an exemption from the commitment to “ever closer union” is particularly problematic. This is contained in Article 1 of the Treaty on European Union and provides the whole rationale for the European project.

If Cameron were granted his wish that this should not apply to Britain in a “formal, legally binding” way, that could deal a major blow to the fundamental premise of the whole EU project. His letter actually calls for more integration in some areas of the single market to boost competitiveness, but an “opt-out” from this is fundamentally different from not participating in the euro, external migration policy, the Schengen area, and so on.

The main sticking point is the question of rights for EU citizens working in the U.K., in particular the rights to in-work benefits and equal treatment. Cameron is demanding that the U.K. be allowed to treat EU citizens differently by imposing a four-year ban on their eligibility for these benefits.

Since such discrimination is prohibited under EU law, this is deeply problematic in both theory and in practice. It strikes at the heart of the principle of free movement as a pillar of the single market—the same market that Cameron is arguing should be strengthened in other areas to boost competitiveness.

Unsurprisingly, various EU institutions and member states are resistant to the U.K.’s insistence on being treated (yet again) as a special exception. The fundamental principle of non-discrimination underpins large parts of EU law. There is undoubtedly a will to accommodate and compromise, but not at any cost.

The Polish government—the British Conservative party’s main ally in their European Parliament group—is understandably resistant to changes that imply that the hundreds of thousands of Polish citizens working in the U.K. are somehow second-class. Tampering with the rights to free movement within the treaty is a Pandora’s box that no member state would seriously wish to open. There is no legal quick fix.

And to many of the other states, a “battle for Britain” could just be an unwelcome distraction from other pressing matters, especially the refugee crisis.

Even if there is agreement on the substance of any changes, experience tells us that the process of change is as vital to success as the substance of the change itself. As Angela Merkel said at her post-meeting press conference, the only way to do so might be to agree on a future treaty change tailor-made to accommodate any political agreement struck by the February deadline.

With the most recent opinion polls showing that the British electorate is split down the middle on remaining in or leaving the EU, Cameron must demonstrate that he can first win concessions and then successfully sell them to the British people as significant. Assuming that he wants the U.K. to remain in the EU, his gamble relies on simply having a political agreement of some sort by February to hold up as a victory in his battle, no matter what the content.

So Cameron certainly has his work cut out. He will need to be creative in proposing legally and politically acceptable solutions. He must convince 27 governments to devote time and energy to discussing the U.K. alongside the refugee crisis, combating terrorism, and sanctions on Russia, and then he must then convince others to agree. Then, most onerously of all, he must sell whatever results he can get to voters at home.

In isolation, any one of these steps would be difficult; together, they look almost insurmountable to achieve by February.

Paul James Cardwell, Reader in EU External Relations Law, University of Sheffield in the U.K. This article was previously published on TheConversation.com.