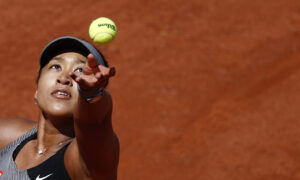 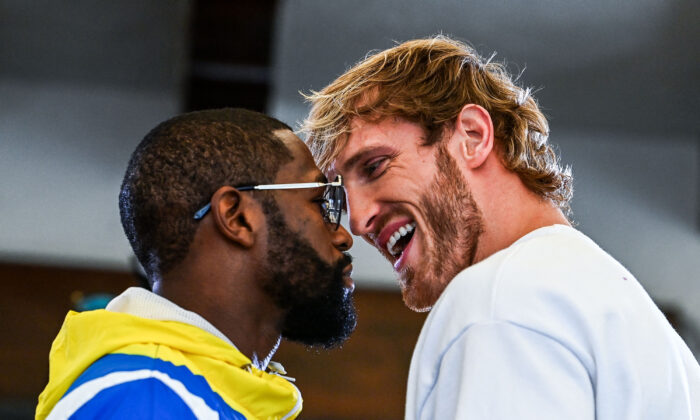 Former world welterweight king Floyd Mayweather (L) and YouTube personality Logan Paul face-off during the media availability ahead of their June 6 exhibition boxing match, at Villa Casa Casuarina at the former Versace Mansion in Miami Beach, Fla., on June 3, 2021. (Chandan Khanna/AFP via Getty Images)
Other US

Dave Hyde: Mayweather vs. Paul Is the Intersection of Sports, Commerce and a Fraternity Prank

FORT LAUDERDALE, Fla.—As a sporting event, it’s the equivalent of “Beach Blanket Bingo,” a fraternity prank of a boxing match between a carbon-aging champ and a social influencer whose athletic apex was high school wrestling and football.

But as a window to a segment of society, as an intersection of sport, commerce and fame-and-fat-walleted greed, Floyd Mayweather versus Logan Paul at Hard Schlock Stadium on Sunday night is the perfect one-off of our times.

In one corner you have Mayweather, 44, simply cashing in again on his great boxing career for the simple reason he can make a reported $10 million by entering the ring with someone who’s never boxed a real talent.

In the other corner you have Paul, who as a 26-year-old YouTube king is feeding his fame at the risk of concussive pain if Mayweather plays serious. Or if Mayweather doesn’t see another easy-paying sequel. Or if the fix isn’t it—and it’s pseudo-boxing, how can it not be?

There are no judges and will be no official winner in the bout, the rules state. There’s certainly no loser, considering the dollars involved. There’s only the question of who will attend in person or pay $49.95 to watch.

Don’t write this off simply as the Kardashianization of America or the continued descent into social nihilism. We’ve always had events like this in South Florida. Actor Mickey Rourke once two-hand shoved a full-time auto mechanic and part-time boxer through the ropes at the War Memorial in Fort Lauderdale in 1991 as a few thousand people laughed (yes, I attended).

Heavyweight Larry Holmes, aged and angry, once sprinted off the roof of a car and Superman-flew at another former boxer, Trevor Berbick, in the parking lot of The Diplomat hotel in Hollywood, also in 1991 (yes, I witnessed it).

Olympic skater Tonya Harding scheduled her world boxing debut in a Fort Lauderdale beach bar in 2005 before pulling out at the last minute (yes, I interviewed her).

There was night in 2011 when former baseball star Jose Canseco was secretly replaced by his twin brother, Ozzie, for another bout in Hollywood that was then called off (I wasn’t there—I have limits).

There also was the Miami backyard brawler Kimbo Slice, who at least did some actual damage in his real and raw affairs. Well, at least until he moved into a professional ring.

Mayweather versus Paul is different from that laundry list of laughable only in its trappings of legitimacy. It’s in an NFL stadium. It’s on legitimate pay-per-view channels. It’s supposedly cashing in big money.

For the fury of thrown punches, you’ll probably see better action in the upper-deck of a Dolphins-Jets game. Even the undercard of former Miami Dolphins Chad Johnson and Byron Maxwell arrives with the expectation of a Betty Crocker Cook-Off. Can former coach Joe Philbin at least referee?

This isn’t sport—it’s sport as parody. And everyone knows it. That’s the charm, if you consider it charming.

“These guys have done a great job fooling the public about being some real fighters,’’ Mayweather said of Paul. “I don’t have to use my A game, my B game, my C game. I can use my Z game. I don’t even gotta hit him hard.”

The everyman question once was if you’d take a punch from Mike Tyson in his prime for $1 million. Paul will cash in for more—and become more famous simply by being more famous.

It’s hard to work up some righteous Mayweather-should-be-above anger. This is what boxers do to stay in a semi-spotlight and make easy money. He beat MMA star Conor McGregor in his final sanctioned fight in 2017 to surpass Rocky Marciano’s 49-0 record.

He then made $9 million for a three-round exhibition with Japanese kickboxing star Tenshin Nasukawa. It wasn’t exactly Muhammad Ali nearing his end fighting wrestler Antonio Inoki—but the link is there.

It’s not boxing or sport. The question is if it’s a hoot. Either way, the circus will move on, and another name added to our list of Rourke, Canseco and Kimbo.