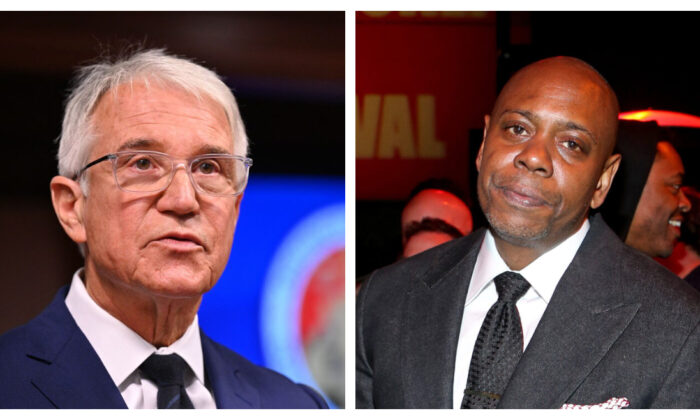 LOS ANGELES—Dave Chappelle’s lawyer says the comedian is unhappy with Los Angeles County District Attorney George Gascón’s decision not to charge the man who allegedly attacked him on stage with a felony.

“It’s a travesty of justice that Gascón is refusing to prosecute this case as a felony,” said Gabriel Colwell, according to the New York Post. “The city attorney, who filed the case, is doing his job but DA Gascón should also do his job and charge this as a felony.

“Entertainers in LA need to know this is a justice system that will protect them. There is no question here that when someone is violently assaulted by another in possession of a deadly weapon that it should be charged as a felony.”

Isaiah Lee, 23, was charged last week by the Los Angeles City Attorney’s Office with single misdemeanor counts of battery, possession of a weapon with intent to assault, unauthorized access to the stage area during a performance and commission of an act that delays an event or interferes with a performer.

Lee is due back in court May 20 after pleading not guilty to the four misdemeanor counts.

Earlier Thursday, the Los Angeles County District Attorney’s Office announced that it would not file any felony charges against Lee.

“After reviewing the evidence, prosecutors determined that while criminal conduct occurred, the evidence as presented did not constitute felony conduct,” according to a statement from the District Attorney’s Office.

The office opted to refer the case to the City Attorney’s Office, which handles misdemeanor prosecutions.

Attempts to reach the District Attorney’s Office for a response to Colwell’s remarks on Sunday were not successful.

Authorities said Lee rushed the stage at the Bowl around 10:45 p.m. Tuesday while Chappelle was performing as part of the “Netflix Is A Joke Festival.” Online video showed Chappelle being thrown to the ground by the suspect, prompting the venue’s security staff and Chappelle’s crew to rush on stage to subdue the assailant. Among those running to protect Chappelle was actor/comedian Jamie Foxx.

According to the Los Angeles Police Department, the suspect was in possession of a replica handgun equipped with a retractable knife blade. The LAPD circulated photos of the weapon Wednesday afternoon.

Lee tried to scramble backstage after the attack, but was forcefully subdued by security. Subsequent footage showed the bloodied assailant with facial bruises and a seemingly broken arm being placed on a gurney and taken away in an ambulance.

Lee, who was initially booked on suspicion of assault with a deadly weapon, remains jailed in lieu of $30,000 bail. If he manages to post bail and is released, he was ordered to remain at least 100 yards away from Chappelle and the Hollywood Bowl.

Lee appeared in court in downtown Los Angeles Friday with his right arm in a sling—the result of his violent arrest on stage at the Bowl—when he was quickly and forcefully detained by security and Chappelle’s entourage.

If convicted of all counts, Lee could face up to 18 months in county jail and/or up to $4,000 in fines, according to the City Attorney’s Office.

It was unclear how the suspect was able to carry a weapon into the venue. The Los Angeles Philharmonic Association, which oversees the Bowl, announced Thursday that it will be beefing up security at performances in response to the Chappelle attack.

Tuesday’s attack occurred on the final night of a four-night engagement of Chappelle and fellow performers at the Bowl as part of the “Netflix Is A Joke Festival.”