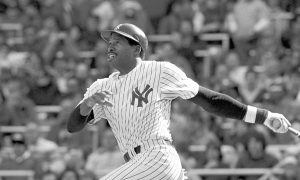 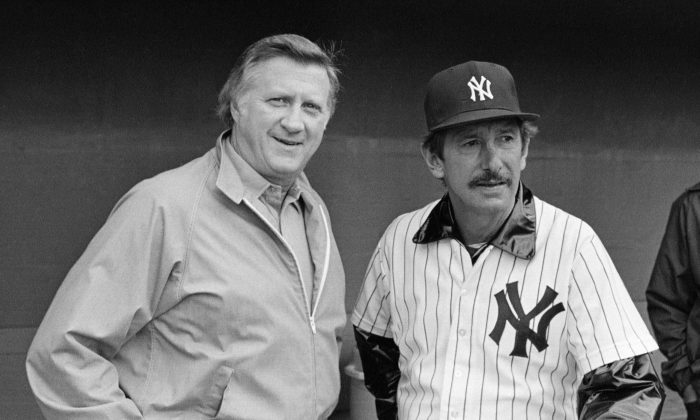 In this March 1, 1983, file photo, New York Yankees owner George Steinbrenner, left, and manager Billy Martin, get together outside the dugout at baseball spring training in Fort Lauderdale, Fla. Steinbrenner owned the Yankees from 1973 until his death in July, and the team won seven World Series championships, 11 AL pennants and 16 AL East titles during his turbulent and blustery reign. Martin had five stints as Yankees manager under Steinbrenner, who fired him four times and let him resign once. (AP Photo/Ray Howard, File)
12- OBSOLETE

With spring training underway, with thoughts of the national pastime in the air, with so many of you asking for the next QUIZ—here it is. Fifty percent correct score gets you into the Yankee expert zone.

71. What is the significance of William S. Devery and Frank J. Farrell in the history of the franchise? _______

72. How many times did George Steinbrenner hire and fire Billy Martin?

73. Who was the 20th manager in Steinbrenner’s time?

74. Who pitched the first no-hitter against the Yankees?

75. Which former Yankees player went on to serve as president of the American League? _______

76. Mickey Mantle was a rookie in 1951 but a different Yankee won Rookie of the Year. Who was he?

77. What Yankee, in his first four years, played on four world championship teams?

78. Two Yankees came to the major leagues without having played one game in the minors. Who were they? _______

His Frommer Baseball Classic – Remembering Yankee Stadium (Second Edition) is his newest sports effort. Autographed copies at the ready of this and his other books.. https://rowman.com/ISBN/9781630761554/Remembering-Yankee-Stadium-Second-Edition