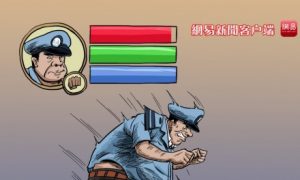 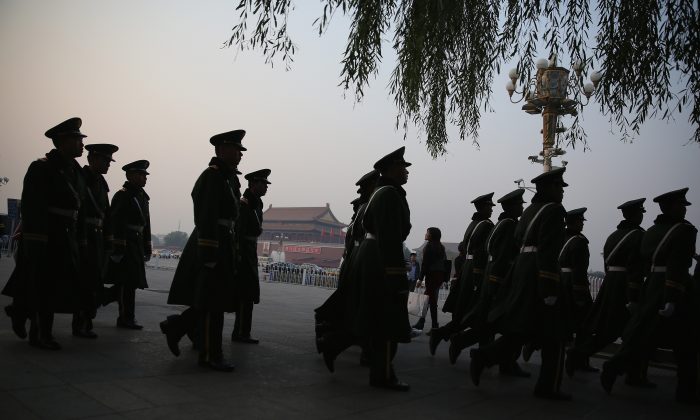 Late last month, a user of China’s social media posted a vivid account of how a group of police officers ate and drank at her parents’ restaurant, and then beat them savagely after refusing to pay the bill.

The owner and his wife were both seriously wounded, Hong Kong’s Apple Daily reported. The attackers, from the paramilitary People’s Armed Police, jeered at them, saying that it would be useless to report the incident.

The story came to light on the morning of April 28 when the owners’ daughter, with the username of “Wing-June,” asked for help on Sina Weibo, a Chinese social media site.

Wing-June described the scene: At around 6 p.m. on the 27th, three military policemen and a woman came to Jinxinyuan Gourmet for dinner. They got a private room and had brought their own liquor. An hour later, four more officers joined them with more drinks. They then ordered more liquor and beer from the restaurant.

Half an hour after closing time, Wing-June’s parents repeatedly asked the guests to pay their bill, but instead of cash, the officers simply asked to put it all on credit. This being against restaurant policy, Wing-June’s mother refused. The military police then began to to walk out, and then, when the owners began calling the police, they turned back and the beating began.

Everyone should be responsible for his acts according to the law.
— Wing-June, daughter of restaurant owners beaten by police

One of the men grabbed Wing-June’s father from behind and two or three others attacked him by smashing his head with bottles. The others went to his wife and struck her repeatedly with objects they found at the cashier. By the time her husband was able to call for an ambulance, she was lying in a pool of blood. No help arrived and eventually the owner’s brother drove them to the hospital.

Wing-June’s father received stitches for two head wounds, but her mother was not so lucky, having fallen into a coma due to the beating. She may have to undergo a craniotomy, doctors said.

“Do not ask me again if it is real,” Wing-June wrote. “They are my mother and father. Who would make a joke like this with their own family? I really don’t know what to do. All I know is that the power of the Internet is great, so please, help. I would really appreciate it!”

The story created a stir on the Internet. Other users expressed their sympathy, and Wing-June thanked them for their “concern and support.”

81-Year-Old Writer Taken Away by Police in China

Soon those responsible for the violence found out. The military policemen who beat Wing-June’s parents, as well as their superior officer, contacted her, asking her to remove the story and discuss with them behind closed doors. Wing-June has refused.

“Several people have called us after the incident, including the attackers and their superior,” Wing-June wrote. “They tried to pressure me and asked me to delete my post on the web so that we can settle this whole thing in private and discuss compensation. I turned them down. It is not an issue of compensation, I just want justice for my mom and dad, a fair and open resolution.”

The People’s Armed Police, with over a million members, is a powerful Chinese security force tasked primarily with internal domestic control. Its personnel are equipped with military weapons and training.

“Everyone should be responsible for his acts according to the law,” Wing-June said.