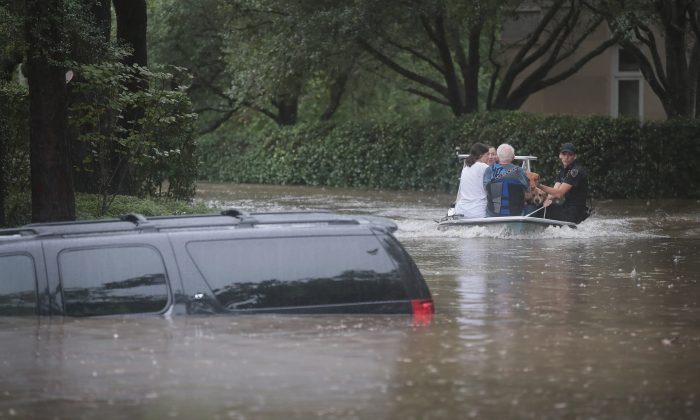 Volunteers and officers from the neiborhood security patrol help to rescue residents in the upscale River Oaks neighborhood after it was inundated with flooding from Hurricane Harvey on August 27, 2017 in Houston, Texas. (Scott Olson/Getty Images)
US

A daughter’s note to her father, a police officer, is making headlines.

An off-duty police officer working with the Waco Police Department was ready to head out and try to rescue people from Hurricane Harvey when his daughter wrote him a note that pulled at his heartstrings, KFOR reported.

The young daughter didn’t want her father to leave, but she seemed to understand that he was working on a crucial assignment.

“Dear Daddy, I hope you don’t get hurt, but I hope you help other people that need it more than you do,” she wrote. “I hope no one gets hurt more. I hope everyone gets away the hurricane. I love you!”, the handwritten note reads.

A photo of the note was posted by the Waco Police Department who praised the young lady.

“As our off-duty officers head into harm’s way to help with Hurricane Harvey rescues, we thought we’d share with you one of their family member’s thoughts.

“And let me say this, I know this young lady (the officer’s daughter) personally and know that it took everything that her daddy could do to keep her from loading up with him to go.”

The comments from the Facebook post all offer their support and kind words to the daughter and her father.

Randy Tucker commented that the daughter should be proud of what her dad is doing for the community.

“Your daddy has dedicated to serving a cause greater than himself. That is not only honorable, it is what we are called to do, in one way or another. Your daddy answered that call. You should be very proud. We are.”, he said.

Another person commented to thank the many officers risking their lives out in the floods.

“Amen! Praying for our officers and praying safety and rescues to be abundant. Thank you for serving not only our community but our state. God bless y’all”, Cassidi Schneider wrote.

As the storm left thousands of Southern Texas residents displaced and in need of rescuing, another deputy sheriff is going viral after he passed out from exhaustion, highlighting how many officers are working overtime to rescue those in need.

The photo was posted by Reddit user colby979 and shows a deputy sheriff sitting on the floor asleep with his head on his chest.

“This policeman worked countless hours helping victims of Hurricane Harvey until he passed out from exhaustion,” the caption on the photo reads.