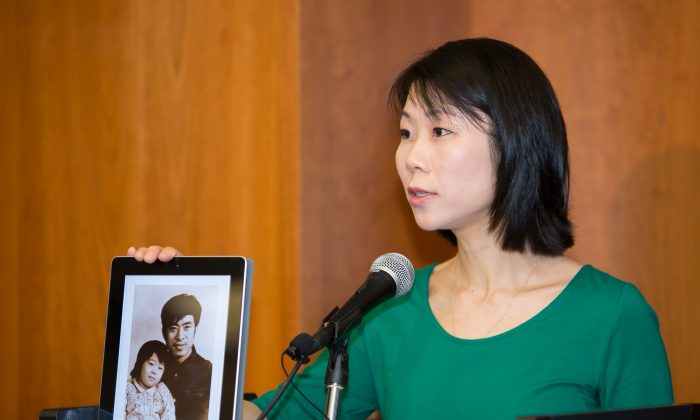 The daughter of a prisoner of conscience who served 15 years in a Chinese prison plans on asking the Chinese regime to allow her father to come to the United States for medical treatment.

Wang Zhiwen was a former coordinator of the Falun Dafa Research Association in Beijing before the persecution to Falun Gong (also known as Falun Dafa) was launched in July 1999. Wang was arrested early in the morning of July 20, 1999, which is the day the Chinese regime launched its campaign to try to eliminate Falun Gong. He received heavy sentence of 16 years in prison in December 1999 due to his belief in the spiritual practice.

Danielle Wang, Wang Zhiwen’s daughter, says he suffered brutal torture during the imprisonment, causing him to suffere a stroke and severe injuries. Almost all Wang’s teeth have fallen out due to torture, and his collarbones, both of which were fractured, have not healed properly. Wang suffered various tortures, such as being kept awake for days and nights, and having bamboo jammed under his fingernails.

Danielle, who is a U.S. citizen, told Epoch Times that she is going to request that her father be allowed to travel to the United States for medical treatment.

Wang hasn’t had an identification card since his detention, and he is unable to apply for a new one, because he’s not allowed to go out freely under the strict watch of authorities in Beijing, Danielle says.

Without an ID, Wang is currently unable to have health insurance. Having no income, Wang is unable to receive regular medical treatment in a hospital either.

“I’ve seen my father’s photos and heard his voice [on the phone.] His tongue seemed to have no strength to speak,” Danielle said. “I think he has suffered too much. He needs me to take care of him to recover well in the future.”

Danielle says her father has also suffered a difficult psychological ordeal because the Chinese Communist Party is still carrying out a campaign against Falun Gong in mainland China, arresting practitioners and promoting propaganda defaming Falun Gong.

Falun Gong is a spiritual meditation practice introduced to China in 1992 by its founder Li Hongzhi. The practice quickly became popular throughout China due to its positive effects on health and improvements in morality. Practitioners seek to live according to the principles of truthfulness, compassion, and tolerance.

Over 70 million Chinese were practicing Falun Gong by 1999, surpassing the number of members in the Chinese Communist Party at the time. The then CCP leader considered the large number of people who had taken up the practice a threat.

The then prime minister Zhu Rongji met with several representatives of the gathered Falun Gong practitioners, including Wang Zhiwen, and he promised the practitioners’ requests would be granted. However, the persecution of Falun Gong was still launched three months later.

Millions of Falun Gong practitioners in China were estimated to have gone through detention, torture, and brainwashing, with over 3700 death cases have been recorded by oversea Falun Gong information website Minghui. Many more death cases from torture and abuse are suspected but cannot be confirmed because of the information  blockade by Chinese communist authorities. In addition, tens of thousands of practitioners are believed to have been killed due to their organs being harvested.

With translation and rewriting by Lu Chen