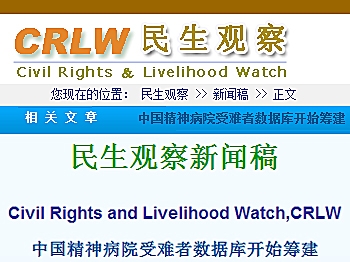 By Grace Wu and Matthew Robertson
Print
A China-based human rights group has started a database to track victims of psychiatric abuse in the country.

Civil Rights and Livelihood Watch (CRLW) opened the database on Oct. 10, according to a press release on their website.

Psychiatric persecution is universal, brutal and severe in China, according to CRLW, and the group has made exposing such abuses its focus. On last year’s mental health day, CRLW released a compilation of cases and advocated mental health laws.

CRLW director Liu Feiyue told Voice of America radio: “[Our] latest action is to establish daily record keeping of Chinese psychiatric victims. We hope these cases will be continuously collected and exposed to the rest of the world.”

The Chinese Communist Party’s policy of "stability overrides everything” has labeled petitioners, dissidents, activists and Falun Gong practitioners as reactionary elements, according to an Oct. 10 press release by CRLW, which is based in Hubei Province.

The press release states that these groups are often victims of psychiatric abuse during events that are sensitive to the Chinese regime. This includes the Olympics, National Day, the anniversary of the Tiananmen Massacre, and during the National People’s Congress and the Chinese People’s Political Consultative Conference. Authorities say they send dissidents to mental institutions to “ensure stability,” the Web site said.

Such individuals, who are not detained because of actual psychiatric illnesses, are often subject to various torture methods during their detainment. The victims often resist their detention and are in turn beaten, shocked, administered psychiatric drugs and even beaten to the point of handicap or death, according to CRLW.

“It’s a society that doesn’t emphasize human rights, and that’s what’s brought this about,” Liu said in a phone interview with The Epoch Times.

An example given by VOA is Hu Guohong, an employee of a car company in Wuhan who petitioned the authorities for over ten years. He was detained at a psychiatric hospital three times between 2008 and 2009, including during the Olympics, the two national congress meetings, and around June 4.

Hu was captured by the police and other agents before the Olympics, “My wife didn’t know which psychiatric hospital I was sent to,” he said.

“I was severely shocked with electric batons. After the shocking, I would be tied to a bench,” Hu said. “Every day, I was tied to the bench as soon as I got out of bed till bedtime. I was even tied down during meal times … I couldn’t see my family for over 70 days, till Oct. 7.”

CRLW’s initiatives have some support from certain journalists and some of those who have been persecuted. Mainstream newspapers, like the China Youth Daily, also publish reports of psychiatric abuses—though their reports are restricted.

Practitioners of Falun Gong, an indigenous Chinese spiritual group, are among the worst persecuted in such institutions. “When it comes to Falun Gong, human rights defenders, and dissidents, of course they won’t publish such stories,” Liu said. “But they’ll report on things that aren’t so sensitive,”

Liu said he will not be surprised if there are repercussions for setting up the database, but he feels that the work is his group’s responsibility.

“Putting ordinary people in mental hospitals is illegal and terrible. It’s been criticized by the international community. Revealing these things, the authorities will be very angry, of course. They’ll make some threats,” he said. “But we think this is extremely serious, and it’s not satisfactory or civilized. We have the responsibility to do this. We may face some pressure or a crackdown; we will face it.”