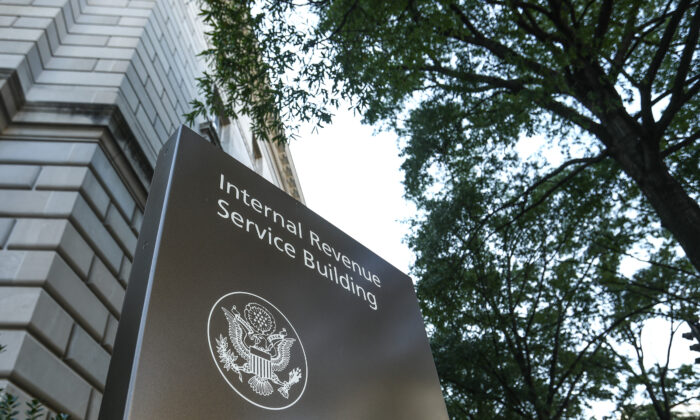 Number of Low-Income Audits Could at Least Triple as IRS Grows, Data Show

Experts are looking to the past for clues as to what a beefed-up IRS might look like if the tax collection agency was turbocharged with more money and manpower.

Over the next decade, the Democrats’ “Inflation Reduction Act” will provide the IRS with 87,000 new agents and $80 billion in funding, with nearly $46 billion earmarked for enforcement.

According to the Congressional Budget Office (CBO), the tax-and-spend bill is projected to bring in $203.7 billion in revenue from 2022 to 2031.

While the Biden administration has promised no new taxes or audits on households making less than $400,000 per year, experts say that promise may be hard to keep, given Congress’s vote against any legally binding safeguards in the recently enacted legislation.

A previous CBO analysis using a similar funding plan featured in the Inflation Reduction Act found that audit rates would be restored to levels of about 10 years ago. The analysis showed audit rates would rise for all taxpayers, but the ones with higher incomes would face the biggest increase.

The oldest data available in the 2022 Government Accountability Office (GAO) report released this year were from 2010. That’s when the IRS was better funded and staffed, with some 95,000 full-time employees.

Over time, the IRS has audited the same percentage of individuals across all income groups, meaning the agency has historically audited the poor more aggressively than the super wealthy, at a rate of 207 to 1 in 2010, and 197 to 1 in 2019.

However, even a return to the 2010 audit levels for those making more than $400,000 per year would still fall short of the IRS’s revenue goal, according to Rachel Greszler, a budget and entitlements senior research fellow at The Heritage Foundation.

“My rough estimate shows that returning to the 2010 audit levels for all income groups would only generate a little over 20 percent of the bills’ estimated enforcement revenues in 2031,” she told The Epoch Times.

In her commentary on The Heritage Foundation’s website on Aug. 12, Greszler wrote the numbers don’t add up using 2019 data either without the lower- and middle-class.

Even increasing recent audit rates 30-fold for taxpayers making over $400,000—including 100 percent audit rates on taxpayers with incomes over $10 million—still would fall more than 20 percent short of raising the estimated $35.3 billion in new revenues by 2031, she wrote.

So it stands to reason that taxpayers can expect audit rates under the Inflation Reduction Act to more closely approximate those of about a decade ago.

The Inflation Reduction Act, a scaled-down version of Build Back Better negotiated by Democrats Sen. Chuck Schumer (D-N.Y.) and Sen. Joe Manchin (D-W.Va.), took Republicans by surprise. The measure passed the Democratic-controlled Senate and House through a reconciliation process.

Alarm bells sounded for Republicans after Democrats shot down an amendment to the bill that was proposed by Sen. Mike Crapo (R-Idaho) to protect small businesses and middle-class taxpayers from increased audits. Crapo’s amendment stipulated that none of the funds from the Inflation Reduction Act could be used to audit taxpayers making under $400,000 a year. Still, all 50 Senate Democrats voted against it.

Republicans on the House Ways and Means Committee said CBO calculated the monetary impact of Crapo’s amendment. Calculations confirmed that had lower- and middle-income taxpayers been protected by the amendment, revenue in the Democrats’ bill would have been reduced by at least $20 billion.

Treasury Secretary Janet Yellen attempted to clear up “misinformation” about the bill in a letter to IRS Commissioner Charles P. Rettig. She wrote that new resources allocated to the IRS “shall not be used to increase the share of small business or households below the $400,000 threshold that are audited relative to historical levels.”

However, her directive isn’t included in the bill, meaning it won’t have the power of law. Tax experts and analysis from the nonpartisan scorekeeper at the CBO indicate Yellen’s promise will likely be broken if the IRS sticks to its income expectations.

“Again, this has no teeth behind it,” said Preston Brashers, a senior tax policy analyst with The Heritage Foundation.

Brashers said it will take time for the audits to start rolling, increasing as the tax agency adds tens of thousands of new agents. Proponents of the bill say a large number of those 87,000 employees will fill jobs lost through attrition, but Brashers said it appears that the agency will almost double in size.

In a statement, Rep. Kevin Brady (R-Texas) estimated that the Democrats’ bill would amount to 1.2 million new audits of taxpayers per year, including more than 710,000 that would fall on Americans who earn $75,000 a year or less.

“If you’re an American worker making $75,000 a year, you are 4x more likely to see a tax hike from this bill than any tax relief at all. You’re hitting middle class families directly and through higher energy prices as well,” Brady wrote on the House Ways and Means Committee GOP Twitter feed.

Another taxpayer category likely to be audited more is rural, low-income households claiming an Earned Income Tax Credit, according to the IRS.

Those who claim the EITC credits often make mistakes or don’t understand the rules, which makes auditing these returns low-hanging fruit for the IRS because they don’t require many man-hours. The opposite is true of audits of wealthy families who can afford accountants and lawyers.

These refundable credits can provide a sizable refund if the taxpayers are qualified.

James R. McTigue, a director in the GAO’s strategic issues team, told The Epoch Times the IRS and members of Congress are concerned about fraud when it comes to EITC credits because of their value. Tax prep businesses may also give low-income taxpayers bad advice, triggering more audits.

“So the IRS does audit those claiming the EITC credit at a slightly higher rate than they do for people in those lower income categories,” he said.

The GAO report noted that audits of the lowest-income taxpayers, particularly those claiming the EITC, resulted in higher amounts of recommended additional tax per audit hour, compared to all income groups except for the highest-income taxpayers.

But the premise that the IRS isn’t performing well due to lack of funding seems false based on recent revenue numbers, Brashers said, adding that new technology should make the agency more efficient even with fewer full-time positions.

Tax revenue is on track to reach a whopping 19.6 percent of gross domestic product (GDP) in 2022, he said.

“The truth of the matter is we are on pace for the second-highest year as a percentage of GDP for taxes,” Brashers added.

UPDATE: This article has been updated for clarity.