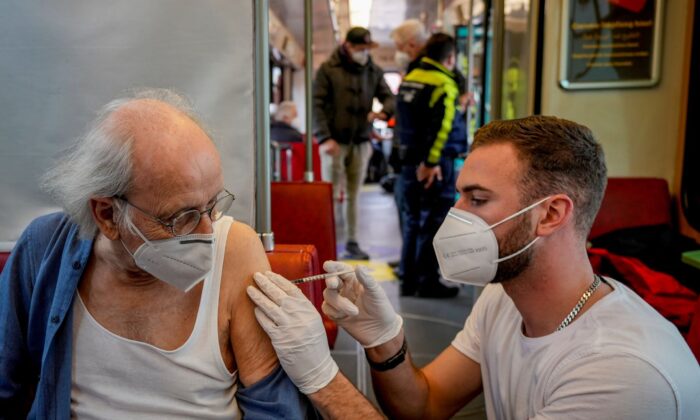 A large German health insurance provider said that it analyzed data from more than 10 million individuals regarding COVID-19 vaccine complications and suggested there were more than health authorities have reported.

The insurer, BKK ProVita, concluded that the rate of vaccine side-effects is several times larger than earlier reports from the Paul-Ehrlich Institute, a German federal agency, according to a letter from the company (pdf).

BKK board member Andreas Schöfbeck told Die Welt publication that the data is an “alarm signal,” adding: “The numbers determined are significant and urgently need to be checked for plausibility.”

The Epoch Times has contacted the Paul-Ehrlich Institute for comment.

The letter, written by Schöfbeck, said BKK analyzed doctors’ billing data from 10.9 million insured people, finding that of that figure, some 217,000 received treatment due to vaccine side-effects. Overall, in Germany, which has a population of about 83 million, the Paul-Ehrlich Institute reported 244,576 suspected cases of COVID-19 vaccination side effects in 2021, the firm noted.

“The data available to our company gives us reason to believe that there is a very considerable under-recording of suspected cases of vaccination side-effects after they received the [COVID-19] vaccine,” he wrote in his letter.

“If these figures are applied to the year as a whole and to” the entire population of Germany, Schöfbeck estimated, then “probably 2.5-3 million people in Germany been under medical treatment because of vaccination side effects after [COVID-19] vaccination.”

Schöfbeck then concluded that based on their data, “there is a significant underreporting of vaccination side-effects” in Germany.

Another letter that was sent out by BKK (pdf) suggested that vaccination side effects reported across Germany are at least 10 times more common than what was reported by the Paul-Ehrlich Institute, reported the Nordkurier newspaper on Wednesday.

The letters did not elaborate on the severity of the side effects, nor did they provide a breakdown of the symptoms, or which vaccines caused the side effects. Germany’s drug regulator has approved COVID-19 vaccines manufactured by Pfizer, AstraZeneca, Johnson & Johnson, NovaVax, and Moderna.

Federal health officials in the United States and Germany have stressed that COVID-19 vaccines’ benefits outweigh the potential risks.