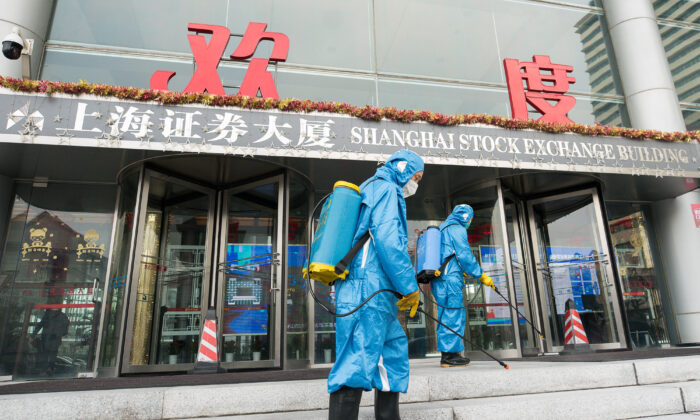 The Chinese economy has grown tremendously over the past three decades, but its stock market has offered investors very dismal returns. Chinese stocks have had the worst performance among Asian and the world’s largest stock markets, according to the Morgan Stanley Capital International (MSCI) April data.

Since its inception in December 1992, the MSCI China index has returned only 1.06 percent per year, which is significantly lower than the returns of MSCI’s emerging markets index (6.91 percent) and its flagship global stock index (8.25 percent).

Meanwhile, stock market investors in the United States have enjoyed higher gains with the MSCI USA index generating an annual return of 11 percent since December 1987.

Bass, who has been a vocal critic of investing in China, also said that “fiduciaries should be sued for investing” in the Chinese Communist regime.

The MSCI China index consists of large- and medium-size company stocks that trade on Chinese stock markets or are listed abroad. The index, which has more than 700 entities, covers around 85 percent of China’s equity universe.

Following the recent sell-off in the Chinese stock market, global investors have become more anxious about investing in Chinese assets.

It’s important for investors to realize that stock market returns and economic growth do not correlate, according to Robin Parbrook, co-head of Asian equity alternative investments at Schroders, a global investment management firm.

“Even where we have domestically-orientated stock markets, returns will be affected by proper legal systems and protection of property rights,” he wrote in a report last October.

This partially explains the success of stock markets in countries with strong government and independent legal systems, Parbrook noted, such as Australia and Sweden.

Parbrook compared the performance of the MSCI China index against that of MSCI indexes of other Asian countries in October and discovered that Chinese stocks had been the weakest performers since 1992.

Asian markets including India, Taiwan, Korea, Indonesia, Malaysia, and Thailand have all outperformed the world’s second-largest economy in terms of stock market performance.

Despite the sluggish returns, why do investors continue to invest in China?

According to Parbrook, many active China fund managers have achieved good returns by disregarding the index and focusing on stock picking.

However, the scope of Chinese industries and stocks that are investible has narrowed in recent months and valuations have fallen because of heightened risks, he noted.

The Chinese Communist Party (CCP) has increased its influence and crackdown on private companies, causing Chinese markets to crash and investors to flee.

Some market commentators believe that, in the aftermath of Russia’s invasion of Ukraine, investors will be more wary about investing in countries with authoritarian regimes.

According to the Institute of International Finance (IIF), capital outflows from China in the first quarter of this year were the largest on record. Investors are abandoning Chinese stocks and bonds due to COVID lockdowns, depreciation, and the perceived risk of investing in countries with strained Western relations, IIF analysts stated.

One recent example of an investment firm to have cut exposure to Chinese assets is a 400-year-old Dutch financial institution Van Lanschot Kempen. After developing a new screening technique, Bloomberg reported, the company began blacklisting a number of Chinese assets in an effort to “avoid controversial countries.”

“It’s shocking to me that it’s taken [Russian President Vladimir] Putin’s invasion and war crimes for the world’s pension and endowment crowd to ‘develop’ risk-based tests for investing in despotic autocracies,” Bass wrote on Twitter in reaction to the Dutch asset manager’s decision.

“I guess losing everything in ‘cheap’ Russian companies taught them a multi-billion dollar lesson. Just think about how much of the West’s pension and endowment assets are already trapped in China. Hundreds of billions.”

Chinese equities continued to fall behind other markets in the first quarter of this year due to lockdowns imposed in major cities, including Shanghai. Beijing’s severe zero-COVID strategy is having a negative impact on investment sentiment and the broader economy.

Regulatory concerns about Chinese stocks listed in the United States also contributed to market volatility, according to analysts.