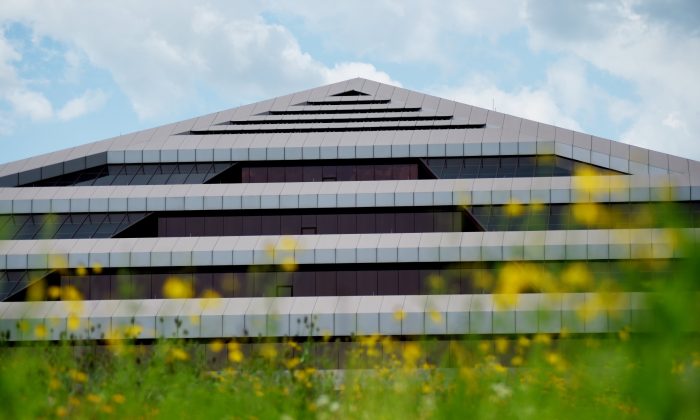 A pyramid-shaped building formerly owned by Steelcase Inc. in Gaines Township near Grand Rapids, Mich., on July 25, 2015. Switch, a major Internet data center developer, would be in the building as the state Senate on Thursday, Dec. 3, narrowly approved lucrative tax breaks designed to guarantee that Switch chooses Michigan as the site of its first mega-campus in the eastern half of the U.S. (Neil Blake/The Grand Rapids Press via AP)
Business

LANSING, Mich.—A major Internet data center developer’s decision to expand into Michigan as long as it receives lucrative tax breaks is testing the economic development strategy of Gov. Rick Snyder, who has called them the “heroin drip of government.”

Lawmakers are rushing to ensure that Las Vegas-based Switch locates a mega-campus of computer servers near Grand Rapids, passing bills to exempt the company and its clients from sales, use and business equipment taxes. The project is billed as a way to land not only Switch’s foray into the eastern U.S. but big “co-located” businesses such as eBay, Shutterfly and PayPal—the high-tech industry that auto-centric Michigan so desperately wants.

“This is the new economy where things are being built. We’re still at the beginning of the Internet age,” said Jason Mendenhall, a senior vice president at Switch.

Supporters of the legislation—which would apply to existing data centers, too—say Michigan must compete with at least 23 states with specially tailored tax incentives for data centers, including neighboring Ohio and Indiana, or resign itself to missing out on Switch and being a non-player in a rapidly growing sector. The demand for data centers, especially huge ones, is fueled by cloud computing and an increasing reliance on outside firms to provide computer infrastructure for businesses because of cost, security and other reasons.

The timing of the fast-tracked bills is not ideal, though, in a year in which the Republican governor and legislators ended cash incentives for the movie industry and were forced to unexpectedly cut spending because companies began redeeming larger-than-expected refundable tax credits awarded under the state’s previous economic development program. Michigan stopped issuing new business tax credits beginning in 2012 under a tax overhaul—instead favoring direct cash grants and loans—but is still liable for old ones worth billions of dollars.

Unlike with the former Michigan Economic Growth Authority deals and film subsidies, the data center changes “will never put the state in a position of owing companies any money,” said Sen. Tonya Schuitmaker, R-Lawton, a sponsor of a bill that won narrow approval Thursday from the GOP-controlled Senate. “These will only affect future revenue, which will only be generated if this legislation is passed.”

The bills, however, are structured to benefit about 40 current Michigan data centers as well, to prevent Switch from having an unfair competitive advantage. The Senate Fiscal Agency projects a minimum $22 million in lost tax revenue from those facilities, potentially less if local governments refuse to grant personal property tax exemptions.

The budget ramifications concern opponents of the legislation, which has come under scrutiny for having no requirement that Switch meet minimum spending or hiring levels to qualify for the tax breaks. Other states have such measures.

The influential Michigan Chamber of Commerce backed broad-based business tax cuts in recent years but opposes the bills, similar versions of which cleared a House panel and are pending in the Republican-led chamber.

Snyder said “you want to make sure it’s a real project that results in real jobs. I’m sure that will be part of the discussion through the legislative process—how do you get a degree of confidence and how do you set benchmarks to make sure it will result in positive things?”

Switch estimates the campus will employ about 1,000 workers and spend $5 billion over 10 years, which could mean the state and local governments forego $228 million in new taxes by 2030. The business would be based in Gaines Township, in a large Pyramid-shaped building that once was office furniture maker Steelcase Inc.’s research facility.

“If we don’t do it, they’re going to go elsewhere,” said Andy Johnston, vice president of government and corporate affairs for the Grand Rapids Chamber of Commerce.

House Tax Policy Committee Chairman Jeff Farrington, R-Utica, said the data center legislation is a broad tax change for “a segment of our economy that didn’t exist prior to 15 years ago.”

But Rep. Jon Hoadley, D-Kalamazoo, said Switch wants to be in Michigan for reasons beyond only tax incentives, including geography. He criticized using “the least efficient economic development tools possible—giving tax breaks to people that never have requested them and are literally growing their businesses without them. This is backwards. If we want to have a Michigan that’s not on a race to the bottom, we’ve got to get off this trend of giving away the farm without expecting anything in return.”