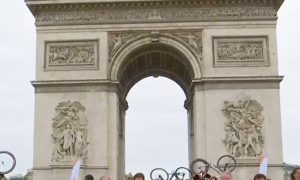 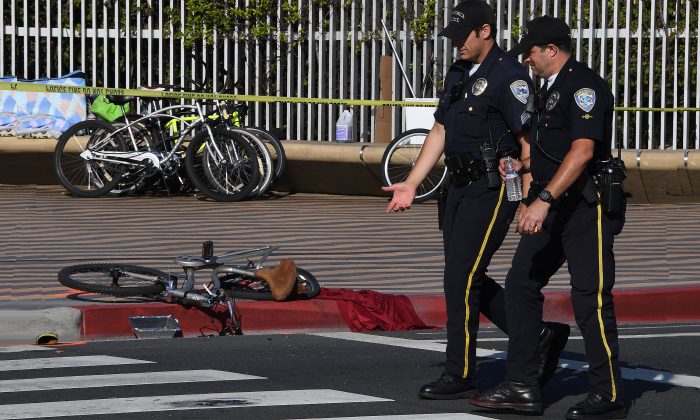 Police walk past a damaged bike at the scene of a six car accident after an elderly woman driver severely injured a cyclist and collided with the other vehicles at the entrance to the historic Santa Monica Pier in Santa Monica, Calif. on April 19, 2017. (Mark Ralston/AFP/Getty Images)
Australia

Once again technology has captured a horrible moment in the lives of some unsuspecting people and allowed the rest of the world to share the pain.

This time a Queensland driver’s dash-cam captured a collision between a man riding a bicycle and a man driving a red SUV.
–

Happily this was not a blood-and-guts collision—at worst the cyclist might have a few scrapes and bruises, and the SUV might have a scratch in the paint.

What this video does illustrate, is how difficult it can be to apportion blame when analyzing a cycling incident.

In this case, the rider was proceeding along the sidewalk on the left side of the road (the proper side, according to Australian traffic laws.) The SUV is proceeding normally through traffic and preparing to enter a parking lot on his left.

The SUV turns—right into the path of the cyclist. The cyclist doesn’t have time to completely avoid a collision. He slams on his brakes and veers sharply left, but collides with the SUV’s fender (that’s “wing,” in Australian) and bounces to the ground.

Riding on the sidewalk is permitted in Queensland (not everywhere in Australia so check before you ride) so the cyclist had every right to be there.

There are laws regarding “Failing to give way to a pedestrian/cyclist on a pedestrian crossing,” which states, “You must give way to pedestrians crossing a road you’re turning into or entering.”

On the other hand, the cyclist could be cited for “Riding across a crossing other than as permitted.” The driver of the SUV would seem to be guilty of “Moving into the path of a vehicle or pedestrian and causing a traffic hazard.”

How fast was the cyclist traveling? Is that even an issue?

While the case hasn’t come to court yet, a few basic assumptions seem sound, the first being that the driver of the SUV bears responsibility.

If the cyclist had instead been a young mother running behind a baby jogger with an infant on board, no one would stop to ask who was at fault.

The cyclist was proceeding legally down an authorized lane of travel. The SUV driver, before crossing that lane, has the responsibility to ensure he can cross safely. He may not have expected a cyclist to be traveling down the footpath, but it is his responsibility to do so.

Hopefully, the court which hears the case will see it that way. All too often in some localities, cyclists are seen as hazards and nuisances, even when obeying the law. (Anyone who has done a significant amount of road cycling can attest to this.)

But … is the cyclist thus free of all responsibility?

Think Before You Ride

This kind of behavior is part of what gives cyclists a bad name among both drivers and pedestrians.

First off there is the basic issue of survival.

A cyclist is often clad in not much more than a T-shirt and shorts, while wearing a styrofoam hat. Any sort of fall or collision is most likely going to cause harm to the cyclist. Cyclists need to consider the possibility of a fall and ride to avoid it.

Cars tend to weigh 3,000 pounds and more and tend to be made primarily out of metal. A car’s driver might be the nicest person alive, but that driver will be much more alert for threats—other cars—than cyclists. And in any sort of confrontation, “Right of Way” is not an issue once flesh and bone meet metal and tarmac.

You can get very badly injured while being right, legally. Most cyclists who last a while learn that survival needs to be considered before “right of way.”

The gentleman in that video—and everyone hopes he was completely uninjured and his bike, completely undamaged—deserves a Darwin Award—well, at least a lapel pin.

The cyclist came steaming up to a parking lot entrance, knowing that cars would be pulling in an out at all hours of the day and night, and didn’t even slow down to look. He approached an obvious hazard with incaution.

Further, as any cyclist with more than a few miles’ experience can attest, drivers don’t expect cyclists to be on sidewalks.

Drivers will frequently yell at cyclists on the road “get on the sidewalk!” but when crossing sidewalks, drivers may not look for cyclists, or anything traveling faster than a pedestrian (and some drivers tend to assume pedestrians will hear the car and stop for it.)

Cyclists coming off sidewalks to cross side streets or crossing driveways are either smart enough to figure it out or get taught painful lessons. This poor rider is one of the latter.

None of this in any way absolves the driver of the SUV of any guilt. The SUV driver was 100 percent at fault. A car cannot make a turn across a lane of travel without looking. Driving Basics 101.

But the cyclist needs to think a little more deeply before getting back on the bike. Winning in court doesn’t mean much if you leave the courtroom in a wheelchair. And every time a car and bike come together, no matter whose fault it is, drivers become less tolerant of cyclists, whether out of fear of lawsuits or annoyance or honest fear of injuring a fellow human being. None of that helps the cyclist survive.

A Little Compassion and Tolerance

Drivers … you are piloting death-dealing, two-ton metal missiles at close quarters with other fragile human beings. Airbags and all keep you safe to a degree, but please, take the responsibility seriously. Something like 30,000 Americans die on roads every year. Text later.

And cyclists—it is up to cyclists to show drivers that the two conveyances can coexist, and can cooperate safely without anyone being impeded. The risk of harming others might be less than when driving, but the responsibility is just as great. Accept it. Honor it.

A little tolerance and compassion will work wonders for drivers and cyclists.

Remember—it could be your child behind the wheel—or turning the pedals. Do right. It matters.