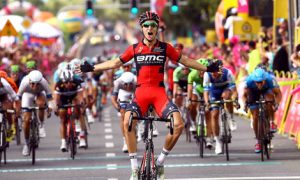 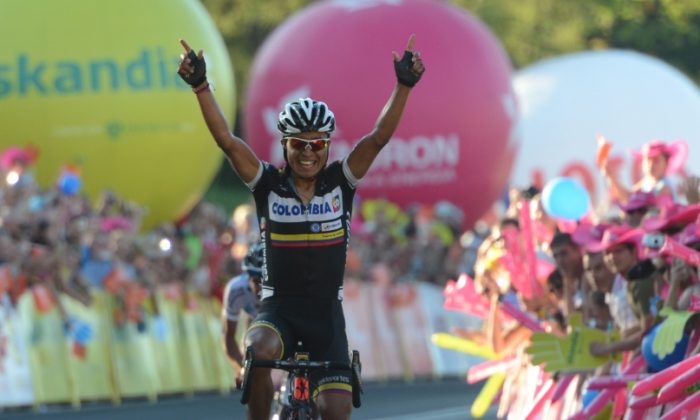 Team Colombia got its first World Tour victory Friday as Darwin Atapuma became from behind in the final hundred meters to win on the uphill finish of Stage Six of the Tour de Pologne.

The 25-year-old Colombian climber was part of the day’s first breakaway, joined every other sizeable breakaway, chased down every strong attack, attacked on the last of the day’s ten categorized climbs, and attacked again on the final 2.5-km uphill finish.

AG2R’s Christophe Riblon, who has been absolutely fearless since his win in the Tour de France’s Double d’Huez stage, caught Atapuma 1500 meters from the finish; the Colombia rider, knowing Riblon was riding for the yellow jersey, made Riblon lead the way to the line. Atapuma attacked coming around the final turn to take his second win as a pro and his team’s first World Tour win.

“I am happy, tired but really happy: honestly, it feels great to be a World-Tour stage winner!” Atapuma said on his team’s website.

“When we were at 500 meters to the line, I turned behind and saw no one was coming, and that was the moment I realized I was going to make it. I know this win has a huge importance, not only for me but for the whole team and our project, and makes me even more proud after what happened yesterday: I think we showed we could have won even that stage…”

Atapum a had been having a frustrating Tour de Pologne. He climbed excellently up Stage One closing ascent  to Madonna di Campiglio, finishing second, but terribly in Stage Two’s final climb up Passo Pordoi, the site of his first pro win in 2012.

He joined the break of the day in Stage Five, but dropped back; he was too close to the GC leaders for them to let the Colombian escape, so his presence would have doomed the breakaway. The stage ended in an uphill bunch sprint, but had Atapuma been allowed to escape early, it might have ended with a breakaway win.

Christophe Riblon finished second and earned six seconds’ bonus, giving him the yellow jersey heading into Saturday’s final time trial. The French rider has 19 seconds on Euskaltel’s John Izaguirre, who leads Saxo-Tinkoff’s Rafal Majka by one second. The rest of the top ten are within 41 seconds of Riblon.

This means the whole race will be decided in Stage Seven, a 37-km tike trial with three big climbs in the first half. Taylor Phinney and Bradley Wiggins should shine here. The General Classification is up in the air; whichever of the top fifteen riders has the best day, might win the Tour de Pologne.