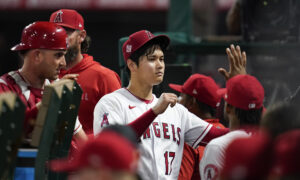 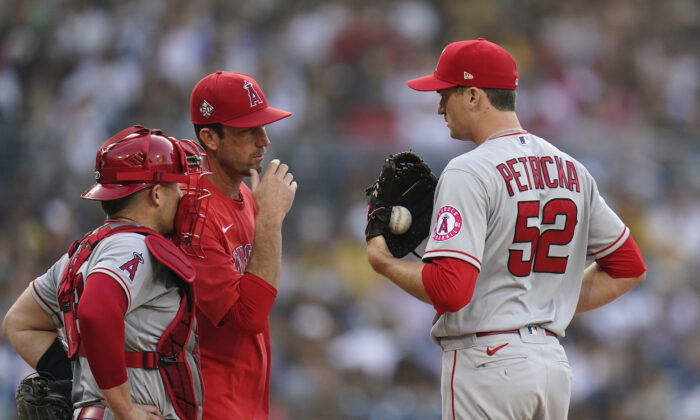 SAN DIEGO—The San Diego Padres are beginning to get some strong starting pitching just at the right time.

Yu Darvish threw six strong innings to earn his first victory in 11 starts and Adam Frazier had two hits and three RBIs during the eight-run second inning that carried the Padres to an 8-5 win against the Los Angeles Angels on Wednesday night.

The Padres took a one-game lead over Cincinnati for the NL’s second wild card. The Reds lost 4-1 at the Chicago Cubs.

Now the Padres hit the road for a pivotal 10-game trip starting Friday night that includes three at the Los Angeles Dodgers, who hold a comfortable lead for the first wild card; four at the NL West-leading San Francisco Giants; and three at the St. Louis Cardinals, who are 3 1/2 games out of the second wild card.

“That’s definitely a big confidence boost for sure the way the starters have been throwing the ball, the length they’re going in games and you feel like they’re giving you a chance to win damn near every night,” manager Jayce Tingler said.

Darvish’s strong outing came one night after the Padres wasted a third straight strong start by lefty Blake Snell. Snell lost his no-hit bid in the seventh and the Padres’ offense went silent in a 4-0 loss.

Snell is scheduled to pitch against the Dodgers on Sunday, after Joe Musgrove goes Friday night and Chris Paddack on Saturday night. Musgrove has won two straight starts and three of five.

The Padres gave Darvish all the support he needed by taking an 8-0 lead in the second.

Darvish (8-9) held the Angels to one run and three hits in six innings, struck out seven and walked one. He hadn’t won since beating the Los Angeles Dodgers 6-2 at home on June 21.

Darvish rebounded nicely after getting knocked out of his last start after just 2 2/3 innings, when he allowed eight hits and six runs, five earned, in an 8-3 loss at Arizona.

Darvish said he spoke Tuesday with Angels skipper Joe Maddon, who managed him with the Chicago Cubs in 2018-19.

“He actually told me that, ‘You know you’re kind of a feeling guy, so you should just go ahead and trust that and go with that.’ I thought I was able to do that tonight,” Darvish said. “For the most part, I’ve been thinking as I’ve been pitching and it may be the first time for me to like really let myself go out there and truly go by how I’m feeling.”

Mark Melancon pitched the ninth for his 37th save, tops in the majors.

While Darvish cruised, the Angels went with a bullpen game and imploded in the second inning. The Padres scored eight runs on three hits and five walks against three pitchers. Seven of the runs scored with two outs.

Frazier hit an RBI double off starter Mike Mayers to open the scoring and finished it with a two-run single off Jake Petricka.

Petricka took over for Sam Selman with the bases loaded and proceeded to walk in three straight runs and throw a wild pitch that brought in another run.

The Angels’ Juan Lagares hit a two-run homer off Dinelson Lamet in the seventh, his fifth, and Jo Adell hit a two-run shot off Daniel Hudson in the eighth, his fourth.