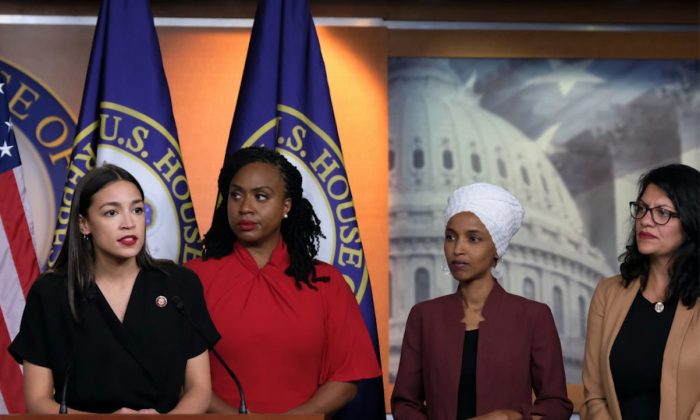 Fayette County Republicans have taken down a fair booth dartboard with taped-on photos of the four Democratic congresswomen collectively dubbed “the Squad” after an attendee complained, according to reports.

The dartboard featured cutouts of Alexandria Ocasio-Cortez (D-N.Y.), Ayanna Pressley (D-Mass.), Ilhan Omar (D-Minn.), and Rashida Tlaib (D-Mich.), with tiny holes where darts had punctured the women’s likenesses. The offending item was taken down on Monday, July 29, after a fair attendee posted a picture of it on social media, sparking a backlash.

“I rarely post anything political on Facebook, however, after seeing this, I feel compelled to share,” wrote Fayette County Fair attendee Trinette Schmidt Cunningham, according to a Pennsylvania Democratic Party news release, which featured a screenshot of the post. Cunningham’s caption decried the dartboard as divisive and hateful.

“Isn’t there enough hate, violence and divisiveness already? Have we reached that low of a point where any civil discussion is obsolete and instead encourage violence for those with differing opinions?” Cunningham wrote in the caption. “Btw, I would say the same thing if this was at the Democrats booth as well.”

Bill Kozlovich, chairman of the Fayette County Republican Committee, said the complaint was promptly dealt with.

“As soon as someone complained about it, it was taken down,” he said, the Pittsburgh Post-Gazette reported.

“People are making a big deal out of nothing,” he added. “That dartboard was put up there as a joke. Someone throwing a plastic-tipped dart at a dartboard isn’t doing something crazy.”

Kozlovich told Pittsburgh’s Action News 4 the dartboard was put up in “good fun” to give people frustrated by political intrigue in Washington a harmless outlet to blow off steam. He added it was not intended to be hateful or racist.

“These are four women making noise, attacking our country, attacking our president. People were upset about it. This was their way of saying, we’re never going to meet these four, but we’ll have our say,” Kozlovich said, the Post-Gazette reported.

Booth organizers removed the dartboard, Action News 4 reported, and in its place they put up an American flag.

KDKA reporter Mongiovi shared a photo of the dartboard. Her post also features pictures of cornhole boards with photos tacked on of several prominent Democrats with holes cut out where their mouths would be.

Kozlovich told KDKA that his cornhole board game has been around for years.

Instead of bean bags, he uses stuffed socks to throw into the “mouths” of Nancy Pelosi, Chuck Schumer, and other Democratic leaders.

#NEW: The Republican Party booth at the Fayette County Fair is drawing criticism over their carnival games. Tonight on @KDKA the GOP chair addresses those complaints. pic.twitter.com/xnMBie7R1P

“It was all in total fun, there was no malice involved,” Kozlovich said. “You got to have a little fun. I don’t care if you’re a Democrat or a Republican, we’re still one group and we should be getting together.”

Kozlovich added that the cornhole boards would remain at the booth.

In Tuesday’s press release, the Pennsylvania Democratic Party accused members of the Fayette County Republican Party of encouraging “simulated violence against four Congresswomen of color,” adding that they “soiled a family-friendly afternoon with a gross display of hate and intolerance targeting minority women.”

“I was shocked to learn about the recent actions taken at the Fayette County Fair and cannot stress enough how wrong it was,” state Rep. Matthew Dowling, (R-Fayette/Somerset), told Action News 4. “Disagreement over issues is the basis of our republic and part of a healthy democracy, but when that disagreement veers into anything that can be seen as promoting violence against others, it is simply unacceptable.”

‘AOC Plus 3 Are a Nightmare for America!’

As the most left-leaning Democrats in Congress, the four members of the so-called “Squad” have faced tough rebuke from President Donald Trump, who called the quartet a “nightmare for America.”

Trump took to Twitter on July 23 to call out Omar for her past anti-Semitic rhetoric.

“In 2016 I almost won Minnesota,” Trump wrote on Twitter. “In 2020, because of America hating anti-Semite Rep. Omar, & the fact that Minnesota is having its best economic year ever, I will win the State! ‘We are going to be a nightmare to the President,’ she [says.]”

In 2016 I almost won Minnesota. In 2020, because of America hating anti-Semite Rep. Omar, & the fact that Minnesota is having its best economic year ever, I will win the State! “We are going to be a nightmare to the President,” she say. No, AOC Plus 3 are a Nightmare for America!

“No, AOC Plus 3 are a Nightmare for America!” he added.

Trump’s comments come amid a fiery feud between him and the four far-left Congresswomen that began several weeks ago.

Trump accused the four freshman congresswomen of being anti-Semitic and anti-American in a series of posts where he most notably called on “‘progressive’ Democrat Congresswomen” to “go back and help fix the totally broken and crime infested places from which they came. Then come back and show us how it is done.” Apart from Omar, who was born in Somalia, the other three congresswomen were born in the United States.

The president continued his criticism of them during his speech at Turning Point USA’s Teen Student Action Summit at Washington on July 23, this time targeting Tlaib for her conduct in a recently resurfaced video that showed her shouting at one of then-candidate Trump’s campaign speeches in 2016.

“I watched just this morning, this Tlaib from Michigan,” he said. “There’s no way she stands for the values of the people of Michigan but I watched her this morning she’s vicious, she’s like a crazed lunatic. … She’s screaming like a total lunatic at one of our rallies,” Trump said.

,@realDonaldTrump on Rashida Tlaib: There’s no way she stands for the values of Michigan pic.twitter.com/bLZAEZsvTx

“This is not a sane person, folks, when you look at that, and this is what we’re up against,” he continued. “The Democrats, I guess, are forced to embrace her, and I call it AOC plus three.”

Many of Trump’s opponents denounced his comments, labeling the president a racist. But Rich Valdes, the associate producer of the Mark Levin Show and a potential GOP challenger against Ocasio-Cortez, said he thinks Democrats and progressives are using the term in order to gain politically.

“Well I think the president could say anything and I think they would respond with an assault on him saying that he’s a racist,” Valdes told The Epoch Times, “that is in recent years that has become the go-to response to any argument whether it’s you know we don’t think that climate change is causing this or we think lowering taxes will create more revenue.”

Valdes said he supports the president for calling out the progressive congresswomen for their positions and rhetoric but added he didn’t think saying “go back” was a judicious word choice.