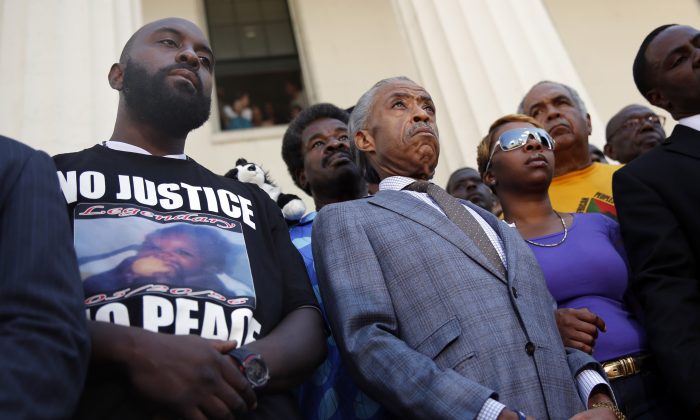 In this Aug. 12, 2014, photo civil rights leader Rev. Al Sharpton (C) stands with the parents of Michael Brown, Lesley McSpadden (R) and Michael Brown Sr. (L) during a news conference outside the Old Courthouse in St. Louis. Lingering questions about Michael Brown could be answered Wednesday as two news organizations seek the release of any possible juvenile records for the unarmed 18-year-old who was shot by a police officer last month. (AP Photo/Jeff Roberson)
Life & Tradition

Darren Wilson Photo: That Picture of Man with a Broken Eye Socket is Fake

A photo that purports to show Darren Wilson, the Missouri police officer who shot and killed Michael Brown last month, isn’t actually of him.

The photo, which shows a man with a busted-up face, is actually of motocross driver Jim McNeil.

Says About.com hoax specialist David Emery: “The photo was taken in 2006, not 2014, and actually shows injured motocross driver Jim McNeil, who broke several bones in his face during a practice ride with a friend (McNeil died in 2011 after another riding accident in Texas). It began making the social media rounds, mislabeled as a pic of Darren Wilson, on or about September 2, 2014, and was quickly debunked by the political blog Little Green Footballs and other sources.”

The photo is being shared widely on social media sites.

Here’s what the description of the photo says:

Why aren’t the media releasing the photos of Police Officer Darren Wilson’s injuries after he was assaulted by “the unarmed black teenager”? He was punched in the face before he emptied his weapon into the drugged “unarmed teenager”—here is what a broken eye socket looks like.

WASHINGTON (AP) — The Senate’s No. 2 Democrat on Friday asked Defense Secretary Chuck Hagel to review a program that provides high-powered rifles and other surplus military equipment to civilian police departments across the country.

Sen. Dick Durbin of Illinois said he has long been concerned about the adoption of military-style tactics by local police departments and their use of military equipment, but, he said, the fatal shooting of an unarmed teenager by a Ferguson, Missouri, police officer gives “new urgency” to a review of the Pentagon program.

Durbin said he looks forward to working with Hagel to ensure that the military equipment program “is carried out with the safeguards, accountability and oversight that our communities need and deserve.”

Specifically, Durbin said he wants to ensure that the Defense Department consults with the Justice Department to determine whether police departments need the equipment and comply with federal standards for receiving grants. He also wants to increase oversight of the program and improve training for local police.

The White House is conducting a review of programs that have equipped local police departments with military gear from the Pentagon, and Pentagon spokesman Mark Wright said, “The secretary is participating in the president’s review of all federal programs and funding that enable state and local law enforcement to purchase or obtain military-grade equipment.”

The Justice Department has launched a broad investigation into the Ferguson Police Department, following the shooting last month of Michael Brown, a black 18-year-old by a white police officer.

Durbin’s letter comes as Sen. Claire McCaskill, D-Mo., plans a hearing next week to examine the Pentagon program and similar programs that enable local police departments to acquire surplus military equipment, including armored cars and assault rifles. McCaskill, who chairs a subcommittee on financial and contracting oversight, has called for authorities in Ferguson to “demilitarize” the situation.

Speakers at the hearing, set for Tuesday, include a top Pentagon official overseeing acquisition, technology and logistics, as well as officials from the Homeland Security and Justice departments. Both departments award grants to local law enforcement agencies for tactical equipment.

Critics say the equipment programs have aggravated clashes between police and protesters. McCaskill and other officials have decried images of heavily armed police pointing high-powered rifles at protesters following the Aug. 9 shooting of Brown by Officer Darren Wilson.