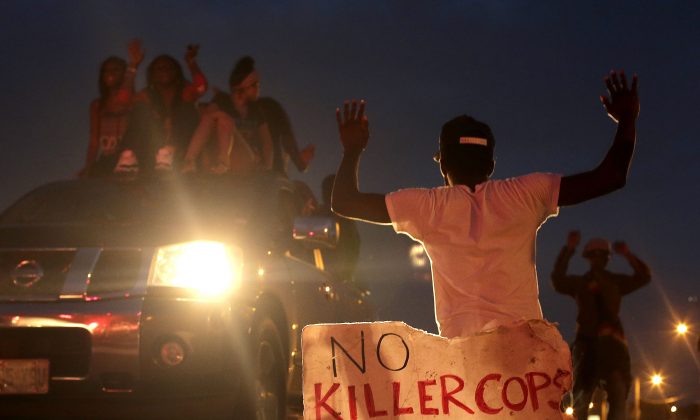 People protest Sunday, Aug. 17, 2014, for Michael Brown, who was killed by a police officer last Saturday in Ferguson, Mo. As night fell Sunday in Ferguson, another peaceful protest quickly deteriorated after marchers pushed toward one end of a street. Police attempted to push them back by firing tear gas and shouting over a bullhorn that the protest was no longer peaceful. (AP Photo/Charlie Riedel)
US

A video that purports to show Darren Wilson standing near the body of Michael Brown has emerged.

Crenshaw, according to CNN, lives in an apartment near where Brown was shot in Ferguson, Missouri, last Saturday.

She said she recorded the killing because something about it didn’t seem right.

A medical examiner who was commissioned by the family said Brown, 18, was shot six times including one in the head.

Wilson, 28, was identified as the killer of Brown.

Crenshaw said, “From it all initially happening, I knew this was not right. I knew the police shouldn’t have been chasing this boy and firing at the same time. And the fact he got shot in his face, something clicked in me and I thought someone else should see this so I recorded.”

Brown apparently was being arrested and taken into a police cruiser before he was shot, she said.

“He was running away and when he [Brown] turned around he was shot,” she said.

Wilson was placed on administrative leave following the shooting. His name wasn’t released until days after the incident took place.

The Daily Mail reported that Wilson appeared “shattered” and paced back and forth on the street.

On Sunday, Missouri Gov. Jay Nixon deployed the National Guard to Ferguson after days of sometimes violent protesting, looting, vandalism, and other incidents.

Officials used tear gas to clear the streets on Sunday evening amid reports of Molotov cocktails being thrown at police.

“I join the people of Ferguson, and all Missourians, in strongly condemning the violent acts we saw last night, including the firing upon law enforcement officers, the shooting of a civilian, the throwing of Molotov cocktails, looting and a co-ordinated attempt to overrun the unified Command Centre,” Nixon said in a statement.