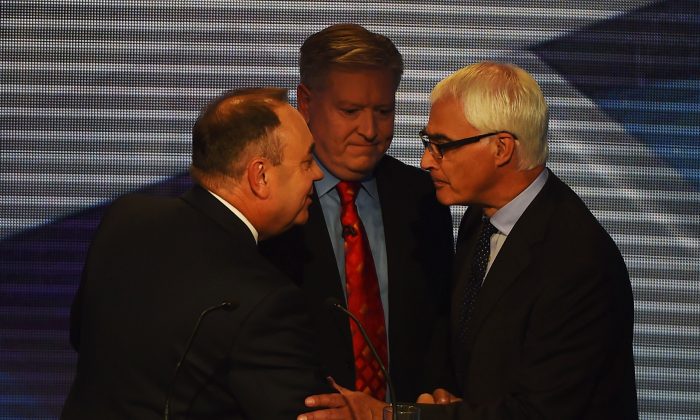 Alex Salmond (L) First Minister of Scotland and Alistair Darling (R) chairman of Better Together shake hands at the end of a live television debate hosted by Bernard Ponsonby at the Royal Conservatoire of Scotland on August 5, 2014 in Glasgow, Scotland. The two politicians are facing questions in front of 350 people during a live televised debate, they will try and influence voters before the referendum on 18th September when the nation will be asked to vote yes or no to decide whether Scotland should be an independent country. (Photo by Jeff J Mitchell/Getty Images)
Europe

Darling: ‘This Has To Be a Decision for the People in Scotland’

As he heads into the final battle for Scottish hearts, leader of the 'Better Together' campaign Alistair Darling tells the Epoch Times why recent polls don't worry him, dismisses rumours of a cover-up of Shetland oil riches, and insists it is right that only Scots vote in the referendum.
By Simon Miller, Epoch Times
Share
FacebookFlipboardTweetRedditEmail
MOREPRINTFONT BFONT S

Just one month out from the referendum, as he prepares for the second televised duel with Alex Salmond next week, Alistair Darling is unruffled by the latest TNS poll, which suggests the ‘No’ campaign is finally closing the long-held lead of his ‘Better Together’ campaign.

“There are two interesting things [about the polls],” Darling told the Epoch Times. “One is they have barely moved in two and a half years. The other thing is they are consistently about 60:40 (in favour of Better Together). TNS always has a very large number of ‘don’t knows’ because they use different methodology; it’s all face to face. I suspect we’ll have hundreds more polls to come. What they are showing is that people are making their minds up – and it hasn’t changed that much. But I’m not complacent.”

The latest poll doesn’t chime with the expectations of many political analysts, who broadly said Darling outperformed leader of the Yes campaign Alex Salmond two weeks ago in a live televised debate.

Central to that debate were the arguments around the currency that Scotland would use should it become independent.

In the TV debate, Salmond refused to discuss other currency options – insisting that Scotland would simply keep UK Sterling. Darling on the other hand argues that an independent Scotland would have four basic options. The first he says is to enter into a currency union with the rest of the UK – to keep the pound. “But of course it needs two to agree that, and the rest of the UK I don’t think would. In any event, I would argue it’s not in Scotland’s interests to do it as our economy would be very different from the rest of the UK; we would be very heavily dependent on oil.”

The second option, is for Scotland to have it’s own currency, which he says in today’s financial conditions would be problematic.

Third, Scotland, could join the Euro, which Darling says is “as popular in Edinburgh as it is in Essex. Nobody wants to do it.”

The fourth option is to simply use another currency but with no currency union. “You can do what Panama does which is simply use the US dollar,” he says. “But then you don’t have a central bank which would make it virtually impossible for the financial services industry to exist in Scotland because there would be no one standing behind it. Also, you have to run a surplus. That would have a huge knock on effect on public services in Scotland because we spend more than we get in in tax. I just think from Scotland’s point of view a currency union would be a bad thing but in order to make it work, Mark Carney, the Governor of the Bank of England, has said you need to have an economic and a political union underpinning it which is the very thing independence takes away.”

Darling argues there is an obvious point on the economic effects of independence – separation would create trade barriers that don’t currently exist.

In the event of a Yes vote there would be negotiations on the currency. Nationalists have suggested that they may not pay their share of the UK debt if they cannot keep the pound. Darling argues that the big issue with this is the risk to Scotland’s financial reputation.

“You get yourself into a huge problem if you say I would consider even defaulting on debt. Suppose the scenario they paint is that if they haven’t got a currency union they default. What does that mean for anyone lending you money in the future? It either means no one will lend it to you or they’ll charge you penal rates. Look at Argentina, for example, which has just defaulted on their debt for the second time in 10 years. They pay more to raise money than a lot of countries because people say well if you lend money to the Argentine government there’s no guarantee you are going to get it back. It’s like everything else. If you default on your credit card then 5 years later you try to get another one, people say hold on we will either not lend you very much or we’ll lend it to you at a high rate of interest.”

Darling’s leadership of the campaign – which is entrenched in such economic issues – is based on his credentials as both a former Chancellor and as a Scot himself. However, as a former UK Minister he is vulnerable to being painted as part of the English ruling class imposing its will on the people of Scotland from their Ivory Tower in Westminster. Darling uses his leverage as a member of the opposition Labour party to separate himself from the current government in London, and to tackle the Yes campaign on its central arguments of self-determination and the creation of a fairer society.

Nationalists often point to the great inequalities in Scotland – the growing gap between rich and poor, and policies like the bedroom tax being imposed on Scotland from Westminster. They believe that only a fully independent Scotland would be able to create a fairer, more just society. Darling disagrees with the premise of that argument. “To start with Scotland has run a deficit for 22 of the last 23 years so the idea you’re going to suddenly gets lots of money to spend on everything that you want again just seems to me to be fanciful.”

The Yes campaign points to the huge sums of money that would be saved by ridding Scotland of Trident nuclear weapons.

“They have already promised to spend that on child care, on more defence, they have spent it 10 times over.” Darling argues.
“If you look at what the nationalists have done, they have cut 130,000 college places, most of which would be going to people from lower income families, most of whom need qualifications to get them out of poverty to get better off. If you look at what they have done in relation to local authorities, they have cut local authority funding, and it’s local authority funding on care and social work. A lot of people on low incomes depend on that. I just don’t accept the fact that somehow the nationalists are socially just and that everybody else is not.

“Now I don’t support the present government either in Holyrood or in Westminster. I want to see a different government next May, one that is committed to fairness. I don’t like the bedroom tax. I think it’s a ridiculous, unfair piece of legislation. When I was at the DWP, Secretary of State there, it was always under the heading of ‘mad and bad’ – you didn’t do it – but Duncan-Smith did. The best way to get rid of the bedroom tax is to get a Labour government next May, not change the constitution.”
In the live TV debate Salmond asked Darling repeatedly if he thought Scotland could be a successful independent country. The nationalists often talk about an independent Scotland being able to emulate successful oil-rich small countries like Norway.

“Most Scottish businesses in one way or another depend on trade with the rest of the UK,” says Darling. “They don’t want a barrier or a border or a boundary between them. The other thing that he [Alex Salmond] frequently tells you is that you can have Scandinavian levels of public services on North American levels of taxation. All these countries tend to have higher levels of tax. They tend to run a pretty tight fiscal ship as it were. If you look at the VAT rates in these countries they are typically 25 per cent not 20 per cent. Of course countries can make whatever decisions they want but you have to cut your cloth according to your means. That’s how life is.”

There’s been recent speculation about a possible find of a large amount of oil to the west of the Shetland Islands, and that the UK government might be keeping this hushed up until after the referendum, afraid it would boost the Yes campaign.

Darling believes that these rumours are being propagated on the Internet by nationalists. The idea of some sort of conspiracy seems fanciful to him. “It’s not governments that find oil, its oil companies, and when oil companies find oil they are very quick to tell people about it because they want to get people to invest in them. You can’t find a giant oil field anywhere and keep it quiet.”

He concedes that Scotland has “done well out of North sea oil; there’s still a fair amount”, but stresses that it’s getting more expensive to extract.

“Fifteen per cent of tax revenues come from oil, which is diminishing and prices are notoriously volatile. They have been between $40 and $130 a barrel in last 10 years. Last year on their own figures they lost the equivalent of everything we spend on schools in just one year. Whereas the UK’s corresponding figure is about 2 per cent of revenues [from oil], which is much easier if you have a bad year in terms of oil revenues, you can make it up elsewhere; in a small economy it’s more difficult to do that.”

Some people say that those living in England should have a say in the referendum on September 18th, arguing it is a decision affecting the whole of the UK. Darling disagrees. “Obviously the time doesn’t allow that now … but no, this has got to be a decision for the people in Scotland. We’ve got to decide what we think is best. That’s the rules I am fighting on.”

A second live referendum debate between Alistair Darling and Alex Salmond will be broadcast by the BBC on August 25th. It will be broadcast from 20:30 until 22:00 on BBC One Scotland and across the rest of the UK on BBC Two.