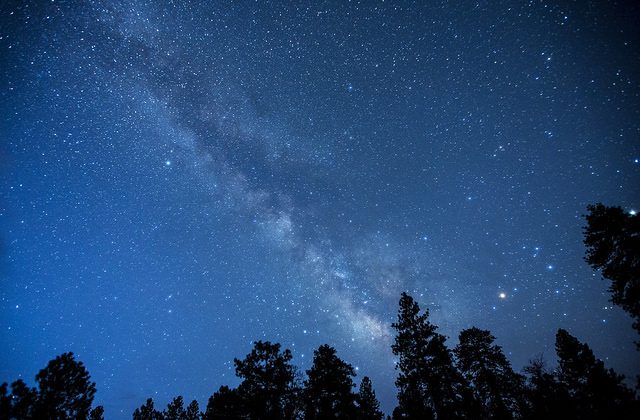 (Bureau of Land Management/CC BY 2.0)
Science

Darkness Is Disappearing and That’s Bad News for Astronomy

Astronomers have much to celebrate in the International Year of Light and Light-Based Technologies (IYL). Until the 1930s, every scrap of information about the universe came to us in the form of light.

Admittedly, once radio telescopes began to make the first inroads into the invisible regions of the electromagnetic spectrum, the game changed. Today, there’s no portion of that universal hum of radiation that is off-limits to ground- or space-based telescopes. But optical astronomy—the old-fashioned kind, using visible light—still reigns supreme.

Today’s optical astronomers are able to glean the most astonishing information from starlight. For example, with exotic calibration tools like iodine cells and laser combs, they can measure a star’s speed with a precision better than one meter per second—a slow walking pace.

Over time, this minuscule Doppler shift can reveal the existence of orbiting exoplanets by the wobble they induce on their parent stars. More exciting still are the possibilities offered by the coming generation of Extremely Large Telescopes, which will boast mirrors larger than 20 meters (about 22 yards) in diameter.

Within the next 10 years, astronomers will have the capability not only to see the distant exoplanets directly, but also to detect signatures of life in their atmospheres. The discovery of any such biomarkers would profoundly alter the way we see ourselves, and our place in space.

With optical astronomy on the brink of a new golden age, it’s no idle boast that the sky is, indeed, the limit.

The Threat to the Night Sky

But that’s the problem. In optical astronomy, the sky really is the limit. When astronomers observe celestial objects, they see them superimposed on the natural luminous background of the night sky.

The Earth’s rarefied upper atmosphere contributes to this, as its air molecules relax after a hard day in the sun. There’s also light from sunlit dust in the solar system, together with a faint background of light from myriad distant stars and galaxies. Pushing to observe ever-fainter celestial bodies, astronomers are sometimes measuring objects whose brightness is only one percent greater than the natural nighttime skyglow.

So you can easily imagine what happens if the night sky is polluted by artificial light from towns, cities, and industrial complexes. The faint objects simply disappear. For this reason, astronomers site their giant telescopes well away from centers of population.

Australia’s national observatory, for example—a AU$100 million ($70 million) infrastructure investment—is located at Siding Spring Mountain in the Warrumbungle Range, 350 kilometers (about 220 miles) from Sydney. But due to the scattering of light by the Earth’s atmosphere, remoteness is no guarantee of darkness, and from Siding Spring, the glow of Sydney can clearly be seen on the horizon.

That light-scattering process turns out to be much more efficient for the blue component of light than for its red component. That’s why the sky is blue; sunlight’s blue constituent is very effectively scattered in all directions. But the same is true for artificial light. Light with a high blue content (think of those intense white LED headlights now seen everywhere on our roads) makes a bigger contribution to light pollution than warmer, cream-colored light.

Is This All About Astronomy?

No, it’s not just astronomers who fall victim to light pollution. Many nocturnal animal species—principally birds and insects—are disturbed by the skyglow of cities, sometimes resulting in large numbers of fatalities.

Recent studies suggest that in the U.S., up to a billion birds are killed each year by becoming disoriented by city lights. And the poster child of the dark-sky movement is the loggerhead turtle, whose hatchlings are confused by urban lighting as they seek the lines of surf that mark their route to a safe ocean habitat.

Research shows that humans, too, can suffer debilitating effects from an excessively bright nocturnal environment, with shift workers at particular risk. The recent discovery of a third light-sensing system in the human eye (a layer of ganglion cells in front of the retina) links the secretion of the sleep-inducing hormone melatonin to an absence of light.

A new study suggests that while humans in the preindustrial world probably didn’t sleep any more than we do, the longer periods of darkness they experienced led to more restorative sleep.

Moreover, the artificial light available to our forebears was always the orange light of a flame, rather than the daylight-mimicking lighting available today. Used at the wrong time—for example, late at night—such blue-rich illumination can seriously disrupt circadian rhythms.

Perhaps the most compelling reason for taking a good look at light pollution is the cost of waste upward light, its effect on both the hip pocket and the atmosphere. Light fittings that are meant to illuminate surfaces such as roadways, sportsgrounds, parking lots, and building facades often have a high upward component, sometimes putting more than 40 percent of their output into the night sky.

Even the humble backyard light is frequently tilted to extend its area of coverage, causing a high proportion of its light to radiate uselessly upward. It’s estimated that in the U.S. alone, upward light-spill from all these sources wastes some $3.3 billion annually, with a resulting greenhouse gas emission from fossil fuels of about 21 million tonnes (about 23 million tons) CO₂ equivalent.

Not surprisingly, it is observatories that have led the crusade against light pollution. The peak advocacy body for good outdoor lighting—the International Dark Sky Association (IDA)—had its origins in the 1980s, when astronomers at major U.S. observatories became alarmed by night-sky degradation. Large telescopes are major investments and need complete freedom from light pollution.

But the IDA is not just for astronomers—it’s for everyone. And so, the association has launched its International Dark Sky Places program, which recognizes the planet’s accessible, pristine skies. A handful have qualified worldwide. The IDA also acknowledges communities with “exceptional dedication to the preservation of the night sky.”

Our national observatory at Siding Spring is close to the beautiful Warrumbungle National Park. It is already a dark site, protected by state legislation, and an obvious candidate for Australia’s first IDA-recognized Dark Sky Park. With support from local communities and the National Parks and Wildlife Service, the Siding Spring Observatory is working toward that recognition.

There are some in the dark sky lobby who are driven to despair by the spread of urban and industrial lighting, but my own view is more optimistic. Yes, we have cities with high levels of upward light-spill, but they are largely a product of a bygone era, when lighting was designed with no thought for the environment.

Today’s outdoor lighting designers are gifted with an extraordinary array of light sources, such as LEDs, that are eminently controllable in direction, color, and intensity, allowing them to create efficient, effective, and elegant lighting without contaminating the night sky.

A recent meeting of lighting designers at Sydney Observatory sent out a clear message—to make a city beautiful and safe, you don’t need to light up absolutely everything.

Colorful Galaxy Is Most Distant Ever Found
Will the Search for Dark Matter End With This Galaxy?

Astronomers and dark sky advocates have no wish to see city streetscapes turned into dim and uninteresting places. It’s the direct upward light-spill that is the problem, and that can be mitigated by the use of properly shielded lighting. If it also has a low blue-content, so much the better—for both the environment and ourselves.

With growing environmental awareness, there’s also public support for a reduction in waste light, with its consequent greenhouse footprint. I believe the cities of the future will be less polluting than those of today in every respect—including their artificial sky-glow.

The real challenge is winning the hearts and minds of everyone concerned with outdoor lighting. That’s one reason why I’m so enthusiastic about the IYL—it’s a great opportunity to publicize the best of modern sky-friendly lighting design.

And, yes, one of the principal legacy items of this International Year of Light might, indeed, turn out to be darkness. Just enough darkness to enable all of us to reconnect with the starry skies of our marvelous country.

Fred Watson, Ph.D., is the astronomer-in-charge of the Anglo-Australian Observatory, operated by the Australian Astronomical Observatory. This article was previously published on TheConversation.com