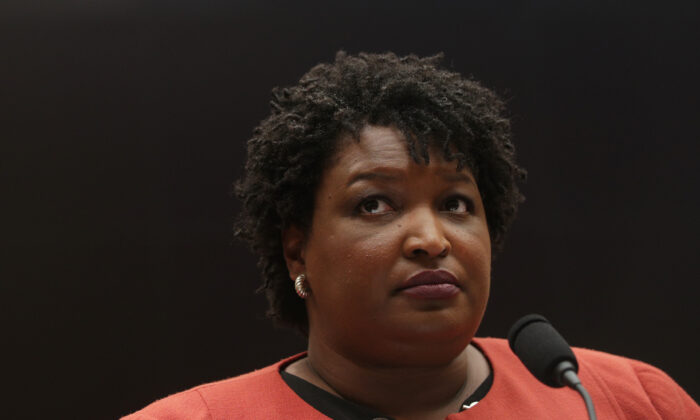 But Abrams, who blames voter suppression for her 2018 loss, is facing a state ethics complaint about alleged “unlawful coordination” with outside dark money groups, which are nonprofit groups that aren’t required to publicly disclose donors.

Abrams denies any wrongdoing, but her meteoric rise from obscure statehouse representative to possible vice presidential consideration appears to have been enabled by large donations from unknown sources to tax-exempt groups—some of which she founded—and marked by blurred lines between her political activities and the various groups that, at best, skirt election laws.

These organizations, and others not named in the complaint, have spent millions backing Abrams and stand poised to support her 2020 political aspirations. According to both federal election law and a Georgia law mirroring federal guidelines, it’s illegal for such groups to coordinate with a campaign or candidate.

The Federal Elections Commission defines coordination as “made in cooperation, consultation or concert with, or at the suggestion of, a candidate, a candidate’s authorized committee, or their agents, or a political party committee or its agents.” Coordination also applies when a committee or group pays for communications that are coordinated with a campaign or candidate, and includes in-kind contributions as well as financial expenditures.

The Georgia Government Transparency and Campaign Finance Commission regulates state campaign finance violations and sent subpoenas to the named groups earlier this year to investigate potentially illegal campaign-finance activities. The Abrams campaign turned over a trove of documents, but a November state Superior Court filing asserts that while voluminous, the disclosures fail to include all of the subpoenaed information. The commission is now asking the court to compel requested disclosures pertaining to communications between the Abrams campaign and these outside groups.

The Abrams campaign is refusing to comply, saying a court order would be an unprecedented abuse of power.

“The Abrams Campaign conducted good-faith searches of its communications at significant expense, including those it had no obligation to preserve during or after the conclusion of its campaign, … and found zero such communications,” reads the campaign’s motion to dismiss, filed on the eve of the Thanksgiving holiday.

Lauren Groh-Wargo, who was Abrams’s 2018 campaign manager, took to Twitter to express outrage at the investigation, which she characterized as “bogus and politically motivated,” and a “bizarre, time-wasting, tree-killing, and power-abusing nonsense of a nothingburger.

“Worse,” Groh-Wargo wrote, “if civic organizations that engage voters of color are made victims of retribution by a governor who presided over his own election and silenced the voices of those same voters, the State of Georgia would resemble a Jim Crow-style banana republic.”

Abrams, who would have been the nation’s first black female governor, fell roughly 55,000 votes short of her Republican opponent and current governor, Brian Kemp, whom she blames for her election loss. Kemp served as Georgia’s Secretary of State from 2010 until Nov. 8, or two days after the polls closed.

But Abrams’s close ties to dark money groups and concerns of illicit coordination predate the gubernatorial election, and might persist should she become the running mate for the Democratic presidential nominee.

Abrams was first elected to the Georgia House of Representatives in 2007. From 2013 to 2016, millions of dollars in donations poured into two nonprofits she founded: Third Sector Development and Voter Access Institute. The groups netted roughly $12.5 million over the three-year period and Abrams personally benefited by nearly a half-million dollars, according to the Atlanta Journal-Constitution. The groups continued receiving undisclosed donations during the Atlanta Democrat’s failed bid for governor.

While Abrams has never revealed the sources of the financial support, the Atlanta Journal-Constitution pegged the George Soros-anchored Democracy Alliance, an out-of-state collection of progressive donor groups; Abrams herself thanked Soros for being an “early investor” in her non-profit activities.

Abrams scoffed on the campaign trail when asked about her dark money donors.

“I can’t imagine that any man at the head of a nonprofit, who achieved what we achieved, and raised the kind of money that we raised, would be asked that question,” she said.

Third Sector Development organized an ambitious multi-year voter registration drive called the New Georgia Project. The 501(c)(3) tax-exempt social welfare organization claims to be “a nonpartisan effort to register and civically engage Georgians.” It has a 501(c)(4) arm that currently says on its website homepage: “Our Closing Argument: Brian Kemp is dangerous for Georgia.”

Third Sector Development rebranded itself earlier this year to “Fair Count,” a dark money group with the mission of making sure “every Georgian is counted” during the 2020 Census—the implication being that illegal immigrants should be included. Abrams supports noncitizen voting in local elections, and has said that Democratic voters include both “documented and undocumented” immigrants, among others, although it’s illegal for non-U.S. citizens to vote in federal elections.

Abrams is cited as Fair Count’s principal officer on its most recent publicly available Form 990, but the tax-exempt organization’s current online landing page lists Rebecca DeHart, a former executive director of the Democratic Party of Georgia, as its chief executive officer, and Jeanine Abrams McLean, Stacey Abrams’s sister, as the group’s program director.

The Voter Access Institute also rebranded this year under the moniker “Fair Fight Action,” and was expanded to allow for greater political activity, such as supporting or opposing specific candidates for public office, and donating to super PACs that can support or attack political candidates.

Abrams stepped down as the group’s CEO after her 2018 election loss, and Fair Fight Action immediately sued the Georgia secretary of state and the state Board of Elections claiming Georgia’s elections policies and procedures were unconstitutional. The case is currently unresolved, and Groh-Wargo has assumed the position of Fair Fight Action’s CEO.

Fair Fight Georgia, the group’s 501(c)(3) sister nonprofit, has begun a 2020 election initiative vowing to “fight for free, fair and secure elections,” and against “foreign interference and sophisticated suppression.” While 501(c)(3) social welfare groups are expressly prohibited from participating in political activity, a joint website of Fair Fight Georgia and Fair Fight Action prominently features images and references to Abrams, along with funding requests and an over-sized homepage quote, stating, “I’m making it my mission to advocate for free and fair elections. Join our fight to ensure access to democracy for all. — STACEY ABRAMS”

A separate federal complaint lodged with the IRS by the election watchdog Foundation for Accountability and Civic Trust (FACT) alleges that Fair Fight Action’s “primary mission is to advance Abrams’ political career.”

The FACT complaint states that the group has improperly accepted donations from a “Stacey Abrams Fundraiser,” bankrolled Abrams’s statewide speaking tour where she told audiences that she’s “running for office again,” hosted dozens of events in early presidential primary states for supporters to “cheer Abrams on” as she issued a response to President Donald Trump’s State of the Union Speech, bought social media ads touting Abrams, and even purchased a Super Bowl ad featuring Abrams.