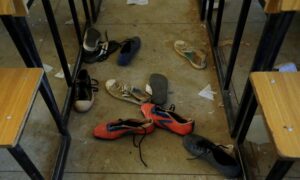 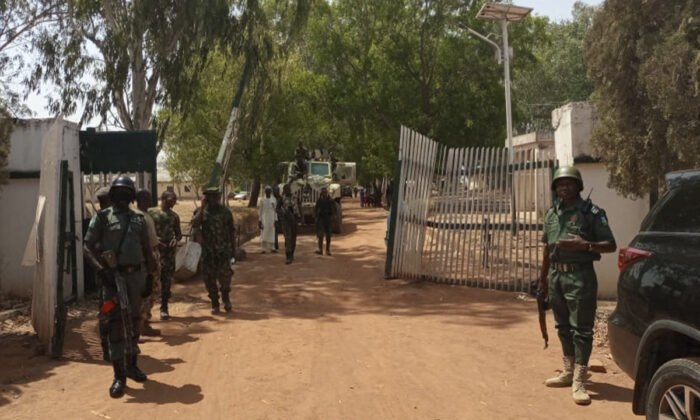 After a kidnapping gang stormed the Federal College of Forestry Mechanisation, shooting indiscriminately before taking at least 30 students at 3 a.m. on March 12, Nigerian soldiers and police officers stand at the entrance of the school in Mando, Kaduna state, on March 12, 2021. (Bosan Yakusak/AFP via Getty Images)
Africa

Bandits are kidnapping masses of students and teachers with impunity in Nigeria’s wild northwestern states, prompting calls for the temporary closure of schools.

Students heading into class on March 15 at 9:00 a.m. at an elementary school in Rama village in Birnin Gwari, 40 miles west of Kaduna City, were confronted by bandits on motorcycles who abducted three of their teachers and drove off to their forest refuge nearby, according to media reports.

Just a day earlier, an abduction at the Government Science Secondary School at Ikara, in Kaduna state, was thwarted by security guards who responded promptly to distress calls from students, according to the Stefanos Foundation, a Christian NGO.

Yet, 39 students and faculty at the Federal College of Forestry Mechanization who were abducted the morning of March 12 have been less lucky. They were spending their seventh day of captivity under a forest canopy, according to a police commissioner who spoke to The Epoch Times.

The 30 college students and nine staff members, chiefly Christian women, were taken from their dormitories at around 3 a.m. and brought to the forest by bandits riding motorcycles, according to Umar Muri Musa, commissioner of police for Kaduna state.

“We have synergy between the army and the police in the search for the students, and we are working round the clock to get the kidnap victims back to the school,” Musa told The Epoch Times.

A viral video shows the Forestry College hostages being struck with a switch and pleading for authorities to make a deal with the kidnappers. The video, posted by the kidnappers and shown on Nigerian TV, shows masked bandits dressed in military fatigues and guarding the hostages with AK-47 assault rifles. The abductors have demanded 500 million Naira (approximately $1.3 million) in ransom, the Stefanos Foundation reported.

“State Governments must review their policy of rewarding bandits with money and vehicles,” Buhari said. “Such a policy has the potential to backfire with disastrous consequences. States and Local Governments must also play their part by being proactive in improving security in & around schools.”

State Governments must review their policy of rewarding bandits with money and vehicles. Such a policy has the potential to backfire with disastrous consequences. States and Local Governments must also play their part by being proactive in improving security in & around schools.

The college is less than three miles away from the 1st Division headquarters of the Nigerian army and a military training academy, and just 12 miles from the center of Kaduna City, a metropolitan area.

As the richest and most populous nation in Africa, Nigeria is a bellwether for the continent and a key U.S. ally in the region, security experts say.

“This copycat mass kidnapping by bandits on the most vulnerable citizens is happening all over again and is appalling,” David Otto, a security consultant at the Geneva Centre for Security and Strategic Studies, told The Epoch Times from Buea, Cameroon.

“This is despite President Mohammed Buhari issuing an ultimatum saying each successive mass kidnap incident must be the last—clearly an embarrassment to the effectiveness of the entire Nigerian security architecture from the state to the Federal Department of Security Services (DSS), the Nigerian Police Force, the Nigerian Civil Defense Force, and local vigilantes.

“A state of emergency should be declared in the North West, North Central, and North East while a plan is instituted. It would be advisable to declare the North unsafe for boarding schools until an effective solution is implemented to safeguard victims of these incidents.

“But that may be only half the solution—because bandits will simply target other schools.”

The bandit raids on schools in Birnin Gwari and the Forestry College were the latest of a series of mass abductions, apparently for ransoms.

Gunmen on motorcycles kidnapped 279 schoolgirls in neighboring Zamfara state on Feb. 27 and returned them after a few days after a negotiated settlement.

In December 2020, more than 300 schoolboys were abducted in Katsina, Buhari’s home state, even as he was visiting. Contradicting claims of security spokesmen that the government doesn’t pay ransoms, “there is always a ransom,” Otto said.

The makeup of the bandit gangs is a matter of contention, with Muslims contending that the bandit gangs are composed of criminals from both Christian and Muslim backgrounds, whereas Christian activists insist that most gangs are made up of radicalized Muslims from the Fulani ethnicity, to which Buhari also belongs.

“There are more than 10 large bandit gangs,” Salisu Hassan, a spokesman for Sheikh Ahmad Gumi, who negotiated recent releases of three mass abductions of college students, told The Epoch Times. “Each of the gangs has between 300 and 500 armed members.

“The Mallam (Sheikh Gumi) has served as an intermediary with the gangs to arrange an amnesty in return for the bandits to lay down their arms and surrender. But because the Nigerian authorities refuse to negotiate with the bandits, everything has become a disaster.”

Critics of the sheikh’s negotiations have called his efforts a surrender to criminals and appeasement.

The uptick of bandit attacks as well as the government’s continuing fight with ISIS allied insurgencies in its three northeastern states portends a turn for the worse, according to Nigeria watchers.

“Nigeria is quickly fading as a failed state,” Kyle Abts, a co-founder of the International Committee on Nigeria, told The Epoch Times.

“Nigeria’s steady descent into lawlessness also may be linked to a genocide against Christians. The bandits, often wearing military fatigues, are using revenues from abductions to fund their forced removal of farmers from rural areas, many of which are Christian.”

Sayo Ajiboye, founder of Mission Africa, wrote in an email to The Epoch Times: “Nigeria is a country ravaged by militants and completely pillaged. There is total war and absolute crisis.

“The Fulani [terrorists] are making a desperate last-ditch bid for a homeland and will fight to finish. Even so, Nigeria is a beautiful nation of great people. I am personally and positively shocked at the resilience of the people in the face of this massive insecurity. Pressed down but not forsaken, they are finding a way through a wild space littered with episodic violence.”

Douglas G. Burton is a former U.S. State Department official who was stationed in Kirkuk, Iraq. He writes news and commentary from Washington, D.C. He can be contacted at burtonnewsandviews@gmail.com.