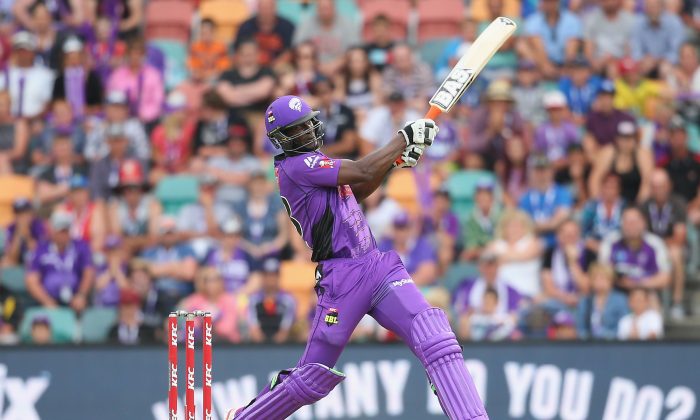 Daren Sammy of the Hurricanes bats during the Big Bash League match between the Hobart Hurricanes and the Perth Scorchers at Blundstone Arena on Jan 10, 2016 in Hobart, Australia. (Quinn Rooney/Getty Images)
International

Daren Sammy has been re-signed to play for Hung Hom JD Jaguars in the Hong Kong T20 Blitz 2018. The St. Lucian cricketer will be joining the likes of Roelof van der Merwe and Chris Lynn in a squad lineup that already boasts of strength and stability.

Daren Sammy was a hugely popular component of the second season of the tournament, in March 2017. In his inaugural season, Sammy treated his fans to a blistering half century, and a galore of boundaries throughout. This year, he returns with even more experience and expertise, and the drive to improve on last year’s performance after the team narrowly missed out on a spot in the finals.

“I’m raring to return back to my Jaguars family,” said Sammy. “I had a wonderful experience last season, and I am looking forward to teaming up with the best of international and local players to inspire the team to being champions.”

Till date, Sammy remains the only international cricketer to captain two World T20 to victories. Since powering West Indies to World T20 triumph in 2016, Sammy has become a much sought after T20 cricketer for various franchised teams across the globe. Collectively, he has played for over 15 teams.

“It is great to have Daren Sammy back,” said the team coach Afzaal Haider. “He is reputed for being a strategic captain, athletic sportsman, and of course, a terrific entertainer.”

Other international players that will be arriving in the third season of the Hong Kong T20 Blitz includes Kumar Sangakarra and Jofra Archer from Galaxy Gladiators Lantau, Sohail Tanveer from City Kaitak, as well as Dwayne Smith from Kowloon Cantons. Hong Kong Island United completes the quintet of the participating teams, all of whom will be competing at the Mission Road Cricket Ground from February 6-11, 2018.