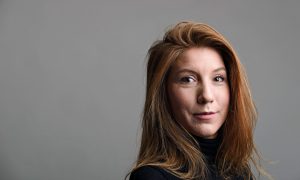 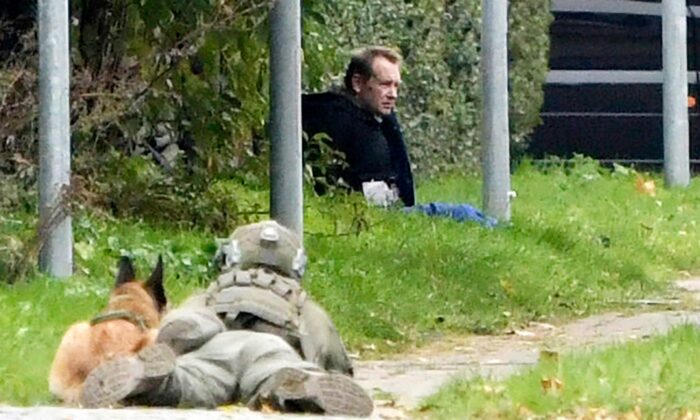 A police officer watches Peter Madsen as he sits on the side of a road after being apprehended following a failed escape attempt in Albertslund, Denmark, on Oct. 20, 2020. The self-taught Danish engineer, who was convicted of torturing and murdering a Swedish journalist on his homemade submarine in 2017 before dismembering her body and dumping it at sea, on Tuesday was captured after an attempted prison escape outside the suburban Copenhagen jail where he is serving life sentence. (Nils Meilvang/Ritzau Scanpix via AP)
Europe

COPENHAGEN, Denmark—A Danish man convicted of torturing and murdering a Swedish journalist on his homemade submarine escaped the suburban Copenhagen jail where he is serving a life sentence but was recaptured nearby Tuesday.

The Ekstra Bladet tabloid posted a video of Peter Madsen sitting in the grass with his hands behind his back and police at distance. According to the daily, Madsen “had a belt-like object around the abdomen.”

On Twitter, police said, “a man has been arrested after attempted escape.” Police spokesman Claus Buhr told The Associated Press it was Madsen. A bomb squad was seen at the scene but police said later he was driven away.

Confirmed details about the alleged escape were limited.

Madsen reportedly took a hostage inside the prison and threatened them with what seemed to be a firearm, Danish media said, adding he stopped 500 meters (0.3 miles) from the prison. Police declined to comment but scheduled a press conference for later Tuesday.

A witness, Frank Jensen, told the Ekstra Bladet that police suddenly surrounded a white van, opened the door, and pulled Madsen out. The scene occurred outside the Herstedvester prison in Albertslund, a Copenhagen suburb where Madsen is serving his sentence.

In 2018, Madsen was sentenced in the Copenhagen City Court to life in prison for killing Kim Wall, a 30-year-old reporter from Sweden who he lured aboard his homemade submarine in 2017 with the promise of an interview. He dismembered her body and dumped it at sea.

Madsen lost his appeal, shortly after apologizing to the victim’s family who were present in the appeals court. The sensational case has gripped Scandinavia.

Madsen has denied murdering Wall. He claims she died accidentally inside the submarine but he has confessed to throwing her body parts into the Baltic Sea.

Life sentences in Denmark usually mean 16 years in prison, but convicts are reassessed to determine whether they would pose a danger to society if released and can be kept longer.

A self-taught engineer, Madsen built rockets in his spare time but never went to college. In 2008, he launched his homemade UC3 Nautilus submarine.

Wall had planned to interview Madsen for a story on a rocket program he founded in 2014, with the goal of building a crowdfunded rocket to launch himself into space. But by the time he finally texted her, his cash flow had dried up and he had canceled the planned test launch.