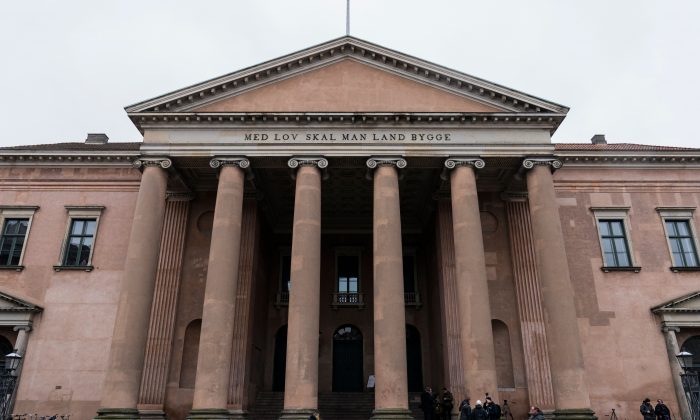 A general view of the Copenhagen City Court in Denmark on March 21, 2018. (Martin Sylvest/AFP/Getty Images)
Europe

STOCKHOLM—An imam in Denmark has been charged with “approbation” of the killing of Jews after quoting and commenting on Muslim scripture that calls for it. This is the first time a defendant will be tried under the controversial so-called “imam law” that took effect in January 2017.

The imam, Mundir Abdallah, spoke at the Masjid Al-Faruq mosque in Copenhagen in March 2017 and quoted a hadith (a Muslim scripture) in which the prophet Muhammad is quoted as saying, with reference to Judgement Day, “The Hour will not begin until you fight the Jews, until a Jew will hide behind a rock or a tree, and the rock or tree will say: ‘O Muslim, O slave of Allah, here is a Jew behind me; come and kill him.’”

While the new law does not make it illegal to quote scripture, prosecutor Eva Ronne said in a press release that “it is illegal if, for instance, the killing of a group of people is called for, and if the preacher at the same time makes the words his own.”

Abdallah was also charged with hate speech. If found guilty, he may be fined or face up to three years in prison.

In the sermon, which was made available on Youtube, Abdallah spoke in the context of Israel and Palestine. According to the press release from the Danish prosecutor’s office, he called for an Islamic Caliphate to “repair what the West has corrupted,” where a united Muslim nation will “free the Al-Aqsa Mosque [in Jerusalem] from the Zionist scum,” so that the aforementioned words of the prophet Muhammad would be realized. He further said that this future nation would “free Jerusalem and tear the Jewish entity out by the roots, this colonialist crusader-base.”

Prosecutor Rønne said, “I think it’s appropriate that the court will now have a chance to evaluate this matter.”

The new law, which specifically targets religious speech, is controversial in Denmark, since some observers view it as limiting free speech, and others believe that it was written solely with Muslim preachers in mind.

Abdallah himself said in a Facebook post that his sermon could in no way be construed as inciting the killing of Jews. He writes that the Muhammad quote does not pertain to Jews in general, but Jews as military aggressors, and that it’s therefore appropriate to use in the context of “the military occupation of Palestine.”

“The Palestine problem is a military problem and can therefore only be solved militarily, by a military liberation of Palestine and the destruction of the Zionist occupation,” Abdallah said.

Dan Rosenberg Asmussen, director of the Jewish Community in Denmark, told Kristeligt Dagblad that he was “satisfied” with charges being brought against Abdallah.

“We are aware that it’s a legal gray area, analyzing Koran quotes in a contemporary context. But for us, there’s never been any doubt about the intentions behind this sermon,” he told the paper.

“I feel that it’s deeply troubling that everyday sermons are held that encourage the killing of Jews.”

Some Danish commentators have voiced criticism. Jacob Mchangama, director of the Justitia think tank, told the Politiken newspaper that the law has problems, especially the use of the word “approbation” rather than “incitement.”

“You could imagine other situations, where you simply make a positive comment about something illegal, which is something you’ll find every day on Facebook, and I don’t think that should be a crime,” he said.

The mosque where Abdallah held the sermon was previously in the media spotlight, in 2015, when it emerged that terrorist Omar El-Hussein visited it prior to killing two people and wounding five in an attack against a cultural center in Copenhagen.