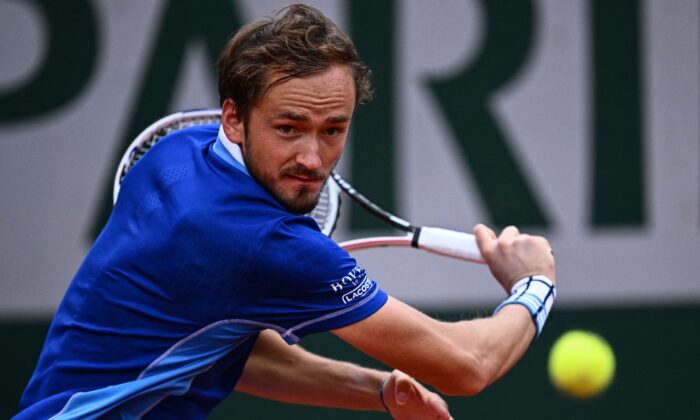 Russia's Daniil Medvedev returns the ball to Argentina's Facundo Bagnis during their men's singles match on day three of the Roland-Garros Open tennis tournament at the Court Suzanne-Lenglen in Paris on May 24, 2022. (Anne-Christine Poujoulat/AFP via Getty Images)
Tennis

Daniil Medvedev Cruises in His Opener at French Open

Second-seeded Daniil Medvedev defeated Argentine Facundo Bagnis in straight sets Tuesday to easily advance to the second round of the French Open at Roland Garros in Paris.

Medvedev blasted 12 aces in winning 6–2, 6–2, 6–2 in an efficient one hour, 38 minutes. Medvedev showed no signs of rust after missing most of the European events to recover from hernia surgery. He broke Magnis’ serve eight times.

“When I did the surgery, I thought I would not play on clay,” Medvedev said after the match. “But with my physio and doctor, we managed to put me back on track quickly and in the end, I was even able to play last week, a difficult match, but I’m happy to have played at least one match on clay to get ready for Roland-Garros and to arrive here in a good shape.”

“It was difficult. For sure I wasn’t able to bring out my best performance. It’s definitely frustrating,” Shapovalov said. “It just shows I have a lot to work on. And just excited to get back to work. Never think I’m done learning and improving.”

In other matches, Richard Gasquet of France advanced but his countrymen Ugo Humbert, Benoit Paire and Arthur Rinderknech all fell.

So did France’s Jo-Wilfried Tsonga, who ended his career with a four-set loss to eighth-seeded Casper Ruud of Norway. Tsonga, who once reached No. 5 in the rankings during his 18-year career, said earlier the French Open would be his last tournament before retiring.

“The crowd was amazing today, supporting me and giving me the power to fight,” Tsonga said, per ESPN. “I finished on the court playing like I did throughout my career. It’ll always be a good memory. In a way, I finished like I wanted to finish.”