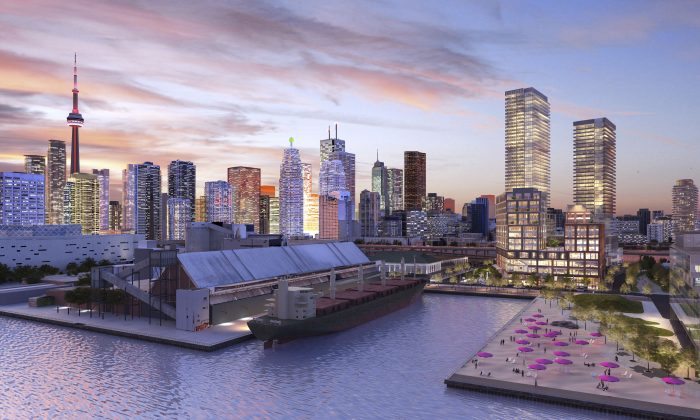 At full build-out, Daniels Waterfront – City of the Arts will include two condo towers (the two buildings on the right) and a pair of office buildings, plus a 150,000-square-foot Creative Industries Hub housing arts organizations like Artscape. (Courtesy of Daniels Corp.)
Canadian Content

Daniels Waterfront Will Be a Destination Day and Night

Before they were demolished earlier this year, The Guvernment and Kool Haus were among the city’s more popular destinations for nighttime entertainment.

The development that Daniels Corp. is building to take their place, City of the Arts, a 1.3-million-square-foot mixed-use community under construction at the foot of Lower Jarvis and Queens Quay, has been designed with more of a round-the-clock spirit in mind.

At full build-out, Daniels Waterfront – City of the Arts will include two condo towers and a pair of office buildings, plus a 150,000-square-foot Creative Industries Hub housing arts organizations like Artscape. Public realm is a top priority here, with a mid-block pedestrian piazza lined with retail, and an extension of Sugar Beach north of Queens Quay.

The idea, explains project broker Dominic Tompa, is for the community to be a bustling hive of activity day and night. “You’ll probably have 2,500 people employed here, and over 1,200 people living in the condos.”

Not to mention students at George Brown College across the street, or those attending the post-secondary institution planned for City of the Arts. “It’s really going to be a vibrant area,” says Tompa.

Tompa, who runs City Life Realty, a Daniels subsidiary, notes Daniels Waterfront—the first privately owned plot in East Bayfront—will serve as the gateway to this emerging precinct, where several other high profile developments are planned, including Tridel and Hines’ Bayside, and Great Gulf Homes’ Moshe Safdie-designed Monde, both of which broke ground recently.

“The next 10 years is going to be pretty exciting on the waterfront,” he says.

The first residential building at Daniels Waterfront, Lighthouse Tower, goes on sale this fall. Designed by Giannone Petricone Associates, the 45-storey condo at the southeast corner of Jarvis and Lake Shore Blvd. will have 534 suites ranging from 347-square-foot studios to 790-square-foot two-bedroom units. There will also be four levels of larger upper-floor units, with four suites per floor up to 2,385 square feet. Suites on the southwest corner of the tower can be combined to form larger units. Prices start at $279,900.

The project doesn’t go on sale until fall, but Tompa notes that the front-end reception area of the sales office is now open, with reps available to provide information on development plans.

“There’s a lot to tell people about,” he says. (Prospective purchasers can partake in the Daniels’ Inner Circle program: they sign up online, put down a $500 deposit and get priority access to sales events and the best choice of suites. If they don’t buy, the $500 is refunded.)

Asian investors and end users are expected to play a significant role in the project’s sales program. “They’ve been an integral part of every community we’ve sold for quite a while,” Tompa says.

Lighthouse Tower will have a fitness centre and party room with catering kitchen, plus an outdoor lap pool, lounge area and barbecue zone, and community gardening plots. Unique offerings include an outdoor tennis court and lawn bowling court. There’ll also be an arts and crafts studio where residents can create to their hearts’ delight, and a music studio if they want to get their jam on.

Indeed, as the development’s name suggests, arts and culture will be a central focus at Daniels Waterfront – City of the Arts.

The community will be anchored by the Creative Industries Hub, a 150,000-square-foot space designed by RAW Design that’ll be located on the site’s south portion, across the road from Corus Quay. Tenants include Artscape Toronto, which is relocating its headquarters to the hub; entertainment law firm Taylor Klein Oballa LLP; music company Last Gang Entertainment; and youth-focused arts organizations The Remix Project and Manifesto.

Above the hub will be 280,000 square feet of office space in two buildings, ideally suited for companies in media, arts, film, and music production (Daniels is moving its head office here).

Daniels Waterfront is the latest in the builder’s growing portfolio of arts-based developments. Others include TIFF Bell Lightbox and the Festival and Cinema Towers in the Entertainment District, and Daniels Spectrum, a cultural facility playing an essential role in the Regent Park revitalization.

Daniels Waterfront will have more than 25,000 square feet of retail space, primarily shops and eateries lining a mid-block pedestrian promenade dubbed The Yard. Inspired by London’s Brick Lane, this link between Lower Jarvis and Richardson Street will be a place office workers and residents can “go and hang out and have fun in the evenings, at lunch, or during the daytime,” Tompa says.

“The whole idea is you don’t want a community that’s emptying out.”

“Same thing with extending Sugar Beach north,” he adds, referring to the new public space planned for the corner of Queens Quay and Lower Jarvis, with a promenade landscaped by Sugar Beach designer Claude Cormier, plus a restaurant and patio.

“It’ll be a great outdoor space where people can gather and music events can take place. It’s all going to be very animated.”

Sales won’t launch for Daniels Waterfront till fall, but construction on the project has begun. “That’s one of our hallmarks,” notes Tompa, referring to the fact that Daniels tends not to dabble in pre-construction sales.

“We bring certainty to a buyer’s purchase [by being under construction]. It gives them peace of mind when they sign an agreement with us that the date we have for occupancy actually has real meaning.”

More information on Daniels Waterfront – City of the Arts: