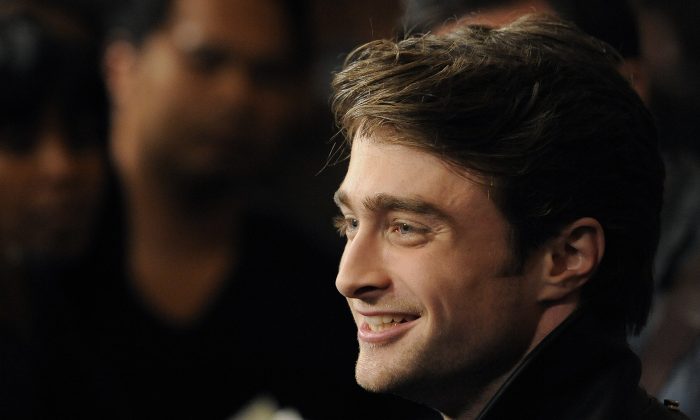 NEW YORK—Although fans were excited when author J.R. Rowling posted a new “Harry Potter” story on the Pottermore website, thinking that they would see  Daniel Radcliffe on screen again, the actor made clear that he doesn’t want to be typecast.

Right after he left the set of the last “Harry Potter” movie, after starring for 10 years as the famous wizard, he went on to do independent film and Broadway, as he was looking for ways to succeed in other roles.

First film he took on after Potter was “How To Kill Your Darlings,” which he says provided him with new learning experiences coming out of the franchise.

Radcliffe’s most recent on screen appearance was in a romantic comedy “What If” where he stars alongside Zoe Kazan (Ruby Sparks).

The two actors had met once before, but didn’t really know each other before filming.

“It deals with that time that most romantic comedies skip over, which is how did these two people fall in love, what do they have in common,” Kazan said.

Radcliffe said he thinks that for the audience to see the process of two people falling in love is “very sweet, and very charming.” Although a lot of scenes were improvised, and even when the cameras stopped rolling Radcliffe told embarrassing childhood stories to Kazan, some of those shots somehow ended up in the final cut.

“We just get along, it was easy,” Kazan said.

“It’s a really cheerful film, it makes you happy without manipulating you,” Radcliffe said.

While Radcliffe said he hasn’t yet gotten his dream role, Kazan was quick to say that she’d like to play Daniel Radcliffe in the future. “You’re like a very hard-working and a very talented person,” Kazan said to Radcliffe.