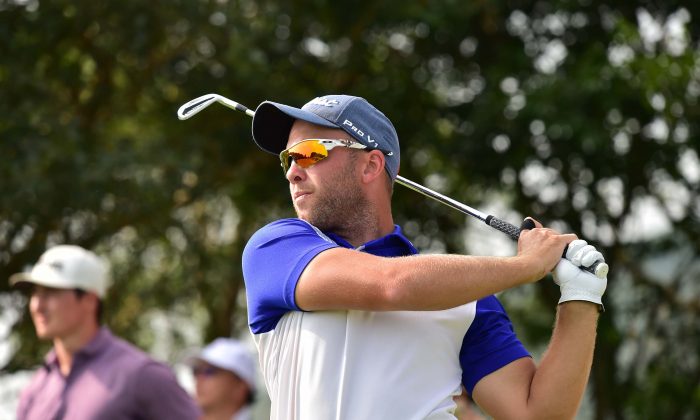 HONG KONG—Daniel Nisbet of Australia picked up 5 shots on the 4-shot overnight leader Alexander Kang to force a playoff, which Nisbet won with an 10ft eagle putt on the first play-off hole to secure the inaugural PGA China Tour Clearwater Bay Open title on Sunday Nov 6, 2016.

“That’s the fastest my heart has ever been beating on a golf course. It was just so exciting,” said Nisbet,

“I knew that if I controlled the speed of the putt that it would go in. I was a little bit excited as I put a good score together and then found out I was in a playoff, so there were a lot of emotions running through my body.

“When I was on 18 again for the playoff, I was calm, but my tee-shot started out left and I knew it had to be a little bit longer to be good. Luckily it hit the cart path and then bounced over the bunker and I probably got an extra 30 yards out of it as well. A little bit of luck went a long way for me today.”

Nisbet starting at -9, bogeyed the 2nd but picked up string of 5 birdies at holes 3, 5, 6, 7 and 9 to finish the front 9 at 13 under par.  Kang starting at -14 dropped a shot at the 1st hole after hitting a bunker from the tee, but he went on to strike birdies on holes 3, 7 and 8 to reach -16 at the turn. At this point Kang looked totally composed and in full command although the close contenders were pressing.

“I calculated the wind wrong [at the 12th}. I thought there was more downwind and I put it in the water. I hit a good shot and I was surprised it went in. I’ll learn from it and play better next time and hopefully not make the same mistakes again,” said Kang.

Charlie Saxon of USA, 2nd in the Order of Merit list, progressed steadily throughout the tournament after a triple bogey 8 at the 18th hole on day one he finished the 1st day tied 30th. On day 2 he carded a 4 under par to rise to a tie for 9th place. On day 3, he moved up again to tie for 4th place together with New Zealander Daniel Pearce, Nisbet, American Sam Chien and Korean Doyeob Mun  – 5 shots off the lead.

On the final day Saxon scored birdies at holes 4 and 5 to start the 2nd 9 at -10. He birdied the 11th and eagled the par 5, 15th, to level with the leaders at -13. Although he birdied the 18th, Saxon finished one shot off the lead carding 266 total and just missing the playoff. He finished in solo 3rd place in the tournament.

Korean, Mun had a good tournament finishing in solo 4th place one shot further back on 267, while Australian David Lutterus and Zhang Xinjun of China finished tied in 5th place. For Lutterus it was steady progress thorough the tournament but Zhang had been around the leaders for the whole time. Starting in the last group on the final day at -10 Zhang had a disastrous double bogey on the 1st hole when his tee shot landed amongst trees, in the deep rough, to the right of the green. He hit out, but over the green, chipped back but still 2-putted for a 5 on the demanding 250 yard par 3. He followed that up with a bogey on hole 2, to drop him back to -7. At that stage he looked out of the race but he came back with a string of 7 birdies from holes 4 to 10 – showing his great resilience. At that point he had got himself back in contention at -14 but could not keep the momentum and faded with bogies at holes 12 and 14, to finish on 268 and tie at 5th place.

This has been a good opening tournament for the PGA Tour China Series in Hong Kong, on this world class course. The weather was perfect, sunny and with little wind for most of the 4 days but a swirling breeze did pick up to add a little variation for part of the final day. The course was in superb condition. Nisbet commented on the course and Hong Kong.

“It’s probably the most enjoyable week I’ve had on a golf course, with the scenery and the condition of the course. It’s the most breathtaking course I’ve ever played.

“The greens out here are brilliant, very similar to what I grew up on, so I felt very comfortable on them. It’s hard to play bad golf when you’ve got such a good course and such a great atmosphere. It’s just a wonderful city as well.”

The players were multi-national with 14 competitors from the USA and a sprinkling from Europe, but there was a big contingent from Australia and New Zealand, and a few from S Korea and Japan as well as some local Hong Kong players.

Except for Alexander Kang’s lead at the end of day-3 the tournament was tight with a lot of movement in end of day positions, but with the better players gradually moving to the top. Order of Merit leader, Dou Zecheng of China had a disappointing tournament, finishing 8-shots off the lead.