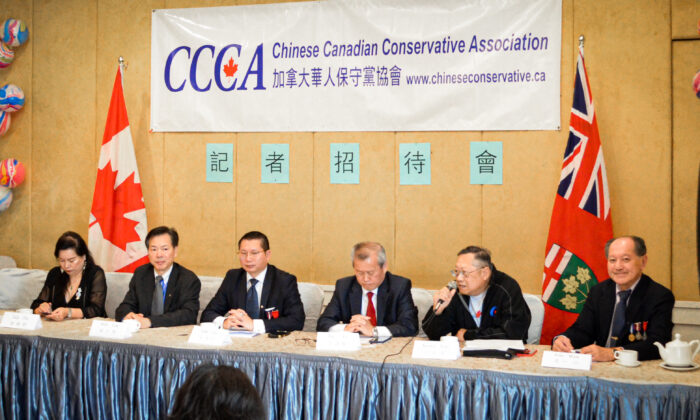 Some Conservative Party members in the Chinese community are expressing concern about a public event held by the Chinese Canadian Conservative Association that described leader Erin O’Toole’s policy on confronting the Chinese regime as a “hatred message on China,” with critics saying it’s the same line pushed by Beijing’s propaganda.

“Mr. O’Toole, your hatred message on China is dangerous as that would easily to be (sic) translated into ‘anti-Chinese’ message,” reads a news release in English handed out at the event, which was mainly attended by Chinese community press.

The release criticized O’Toole for “ignoring the grassroots” and moving the policies of the party “towards the centre,” and said he failed to outreach to the Chinese community.

However, an email announcing the event circulated by national executive secretary Eric Wen focused only on O’Toole’s stance on China.

“We, as CCCA, address the issue about the unfairness treatment of China (sic) and cost our 2 seats of MP of Chinese origin in BC and not even one elected in GTA 55 ridings,” Wen said in an email, a copy of which was seen by The Epoch Times.

A Chinese-language news release, read at the event by CCCA chair John Zhu, stated, “Your [O’Toole’s] hard line and reversal of policy on dialogue has put us in a very difficult position in promoting China in the Chinese community.”

Jonathan Fon, a longtime member of the Conservative Party and founding executive vice president of the Canadian Federation of Conservative Organizations, says the wording the CCCA used in describing O’Toole’s policy on confronting the Chinese Communist Party (CCP) is the same as the propaganda the CCP pushes.

“This kind of messaging is dangerous,” Fon told The Epoch Times, noting that the CCP promotes the line that the Party equates to China and is synonymous with the people of China.

“We must stand up to the Communist government of China. Our quarrel is not with the people of China—a part of an ancient civilization that has contributed much to humanity. … The communist leadership represents a clear and rising threat to Canadian interests—and our values,” the platform says.

A Nanos poll released in September showed that 63 percent of Canadians want the government to be “more forceful” in its relations with China, and that Canadians are “10 times more likely than less likely to vote for a federal party if it had a stronger stance against China (45 percent more likely, 4 percent less likely).”

Fon says he is used to seeing “CCP propaganda” being promoted by pro-Beijing groups in the Chinese community but is very concerned as it now looks like the propaganda is having “strong penetration into Canadian parties’ affairs.”

“It’s an ominous situation,” he said.

Alex Lee, another longtime Conservative Party member in the Chinese community, says the reason Conservative MPs lost in ridings with large numbers of Chinese-Canadians was that they were being attacked by misinformation, with outside forces trying to turn Chinese voters away from them.

He notes that it is highly unusual for the CCCA to hold an event publicly rather than behind closed doors seeking the resignation of the party’s leader.

“I’ve never seen anything like this before,” Lee said through a translator, adding that he doesn’t know what was behind the event.

What additionally makes the event odd, he says, is that the CCCA is asking for O’Toole’s resignation mainly over one foreign policy issue, whereas a political party has a range of policy issues relevant to the life of Canadians.

Charles Jiang, a former president of the Conservative Party’s Markham-Unionville Electrical District Association, says it is expected for Canadian political parties to address human rights abuses in China, such as the crackdown in Hong Kong and Xinjiang.

“I think Justin Trudeau kind of mentioned it but he had a very soft tone, [whereas] Mr. O’Toole was more direct and straightforward on those topics,” he said in an interview, adding that O’Toole’s messaging was focused on the CCP, not the people of China.

“As a Conservative Party member, I think he did the right thing. He shouldn’t just keep the same tone as Justin Trudeau.”

Alex Yuan, who was the previous chair of CCCA until Zhu took over, says although Canada is a democratic country and people are free to voice their concerns, the CCCA shouldn’t have held a public event to ask for O’Toole’s resignation.

“I’m saddened and surprised. The association has a lot of good people … but this is not what well-educated people do,” he told The Epoch Times.  “When you have a family quarrel … you don’t go to the … streets and yell. … Whatever the difference is, whatever the problem is, you have a closed-door meeting and you go figure things out and you make it better.”

Established in the early 1980s, the CCCA has a long history in the Chinese community. Zhu took the helm of the organization in 2018.

In an interview with The Epoch Times, Zhu defended the CCCA’s decision to hold a public event to call for O’Toole’s resignation.

“If we want O’Toole to step down we need … to have our voice heard in the public,” he said.

He said O’Toole should promote policies “that is not hatred of Asian people” and should have approached the Chinese community and associations during the election and shown “his kindness to our Chinese community.”

“We urged that O’Toole, before or beginning or during the election, he should come down to our Chinese community to promote his policies, and then he should not assume something that is all really bad to China, saying that we should not do business with China, we should not accept Chinese business,” he said.

Zhu rejected the suggestion that his organization’s message is in line with CCP propaganda.

Zhu is an accountant and owner of Longbond International Investment Corporation, which is involved in immigration and investment. He said his partner mainly focuses on bringing immigrants from China or other places to Canada, while his own focus is primarily investments and accounting in Canada.

A 2013 article featuring an interview with Zhu posted on the website of the Private Huanlian College, where Zhu graduated from in China, says he was the manager of the “China co-operation project” for the Ontario-based Mohawk College and has been involved in joint education initiatives between China and other colleges in Canada.

Zhu says he did have businesses focused on bringing students from all over the world including China to Canada, but is no longer involved in such initiatives. He also said the project with the Mohawk College was never launched and was cancelled.

An undated photo on a Chinese website shows Zhu walking alongside former Ontario Liberal cabinet minister Michael Chan in China. According to The Globe and Mail, Chan was the subject of a warning by the Canadian Security Intelligence Service (CSIS) over fears he was under the influence of Beijing. Chan has sued the Globe for its reporting.

Zhu says that he thinks the photo is from 2010 or 2011 and that he was accompanying Chan on a visit to China as a friend.

Zhu was also present at a ceremony to celebrate John McCallum’s assignment as Canada’s ambassador to China in 2017, with a seat on the stage. The event was attended by the Chinese consul general in Toronto and was publicized on the website of the consulate.

McCallum, known for his frequent trips to China when he was a Liberal MP, was removed from his post as ambassador in 2019 after speaking publicly in favour of the release of Huawei CFO Meng Wanzhou, whose extradition case was before the courts at the time.

Kenny Chiu, one of the Conservative MPs who lost their seats in B.C. whom the CCCA’s event referred to, says that while he hasn’t been following the organization closely, he doesn’t agree with its position and wonders why it’s not criticizing the rival Liberals.

Chiu said his party’s message has been targeting the Chinese communist regime, not the people of China.

“The problem is a lot of people—especially Chinese who grew up under the communist regime—are under the education and brainwashing that Party equals country, the state equals race,” he said. “This is farthest from the truth.”

During the election campaign, Chiu said he was the target of a wide-scale misinformation effort trying to portray him as working against the interests of the Chinese community.  There were also reports published by Chinese state-owned media attacking O’Toole over the Conservatives’ China policy.

In the last session of the Parliament, Chiu introduced a bill to require those working on behalf of foreign entities to register as foreign agents, in an effort to increase transparency and curb undue foreign influence.  Nanos polling has shown that 88 percent of Canadians support the establishment of such a registry.

However, Chiu says his bill was misrepresented during the campaign by claims that said it was against the interests of the Chinese community.

Chiu says there are many factors leading to a win or a loss in every election and he takes responsibility for not communicating his party’s policies more clearly to constituents, but he notes that there were other forces involved as well.

Chiu said CSIS has talked to him about his experience being targeted for misinformation by pro-Beijing media during the campaign, but said the agency wouldn’t confirm or deny whether it’s conducting an investigation.

Asked whether he think his experience could act as a deterrent to other politicians taking a stance against the CCP, he cited a Chinese idiom.

“In Chinese, there’s an idiom that says ‘kill the chicken to show it to the monkey,’ and it fits with the way that communist China schemes and the tactics that they’ve been using domestically [toward] other opponents, or internationally,” he said. “Now does that mean that for sure [the misinformation campaign against me] is their doing? That would be up to the investigators.”

A recent report by a French government-affiliated think tank documented extensive influence operations by the CCP in Canada, including efforts to influence politics and elections.

“The Chinese Embassy uses local media and money to support some candidates in local elections, in the hope of rallying communities of Chinese origin to toe the Beijing line,” the report says, translated from French.

“The targeted communities are those where the density of Canadians of Chinese origin allows for electoral influence, as in the [provincial riding] of Richmond Centre, Vancouver, where more than half (54 percent) of the population is of Chinese origin.”