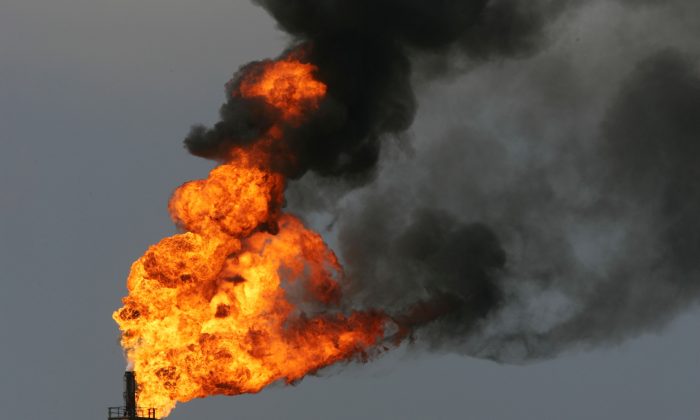 Toxic gases burn off at an oil refinery in California after a blackout caused a factory reset. Compared to the European Union, refining oil in the U.S. is a dangerous business, process safety incidents occurring at least once a week, according to Dr. Michael Wilson from the University of California. (David McNew/Getty Images)
US

Danger Increases at US Oil Refineries

WASHINGTON—When fire broke out from a leaking pipe at Chevron’s Richmond oil refinery last year, a plume of black, toxic, smoke rose 3,000 feet in the air and billowed across the East San Francisco Bay area.

While only one employee was injured, federal investigators described the accident as a “near disaster,” which could have killed a dozen workers. As it was, 15,000 residents turned up at medical facilities in the following days, with complaints including breathing problems, anxiety, and throat and eye irritations, according to a summary report commissioned by California’s Interagency Task Force on Refinery Safety (TFRS).

The report,  compiled by Dr. Michael Wilson, director of the University of California’s (UC) Labor Occupational Health Program (LOHP) said that compared to the European Union, refining oil in the United States is a dangerous business. Process safety incidents happen at least once a week in the refinery industry.

“Safety is continually marginalized in favor of production during both routine operations and turnovers,” the UC report said.

Titled “Refinery Safety in California,” the report cites a 2006 study by Swiss Re, the world’s second-largest reinsurer, which found that financial losses from refinery accidents are three times higher in the United States compared to its European counterparts.

Swiss Re concluded that the difference is due in part to U.S. companies “pushing the operating envelope” and, among other things, pipe inspections that are largely self-regulated by the industry, and low levels of staffing.

The report noted that Swiss Re updated their findings in 2012 and found the gap had widened since its earlier study.

Kim Nibarger, safety specialist for United Steelworkers (USW), said the culture of “pushing the operator envelope” in the United States is creating real dangers for workers and surrounding communities.

What happened in Richmond is symptomatic of many other refineries, many of which are over 60 years old, he said.

In investigations following the fire, authorities found the San Ramon-based oil giant had failed to replace large sections of the refinery’s 1970s-era piping, including the one that failed last year, despite numerous warnings from its own inspectors.

Nibarger said Richmond workers had also repeatedly warned the company about corrosion in the pipe but had become accustomed to being ignored.

“When you are not listening even to your own people, that makes this a little more problematic,” he said.

In order to keep output up, cutting corners on maintenance and safety had become commonplace, he said. “As repair technology has improved, companies look to clamping over cracks or holes in pipes, extending the life of the pipe and saving on shutdowns.”

Some facilities have up to 300 clamps, of all sizes. One clamp is “the size of a Volkswagen,” he said.

In an Aug. 5 agreement reached with the California Attorney General’s Office and the Contra Costa District Attorney’s Office, Chevron Corp. agreed to pay $2 million in fines and restitution for the fire. The company also pleaded no contest to six charges including failing to require employees use special protective equipment.

Chevron Richmond has posted a set of actions on its website that include improving protocols for evaluating leaks and shutdowns, strengthening internal communication, and improving training programs.

Nibarger said the initiatives sound good on paper, but there is too often little application of the rules.

Workers have “Stop Work Authority” to shut a unit down if they see a safety risk but companies override that authority.

“Without the power, the authority means nothing,” he said.

Testifying before Congress earlier this year, Nibarger said not only were workers’ requests to shut the unit down ignored but, after the leak surfaced, Chevron also continued to operate the unit under pressure while exploring how the leak could be fixed.

“To maintain the idea that it is safer to operate a unit with a hole in the pipe—which is not going to get better—than to shut a unit down is absurd,” he said in his written testimony.

According to Wilson, improvements in regulatory oversight and prevention will need to replace the industry’s self-regulation approach, which he described as an “oxymoron.”

“This highlights the need for more transparency and accountability,” he said.

Recommendations made in the UC report include: more transparency about preventive maintenance actions the refineries are taking or not taking, more opportunities for engagement between workers, government agencies and companies, and strict penalties for failure to take preventive measures.

Nibarger said federal agencies need “more regulatory teeth” but under the present situation that is difficult.

The Chemical Safety Board (CSB), the federal agency tasked with investigating chemical accidents, is so far behind it still has six investigations underway from events three years ago, according to the Center for Public Integrity. In 2007, the CSB completed 10 investigations but last year it completed only two out of eight it had hoped to finish.

Nevertheless, the CSB issued a scathing report earlier this year that documented Chevron’s lack of action on imminent safety and maintenance problems.

The same scenario is occurring in Occupational Safety and Health Administration (OSHA). Nibarger says the agency does not have the resources to physically inspect sites, relying on companies to provide safety plans.

“There are hardly enough inspectors to inspect the documents, there is no way in the world they could ever do an equipment or a maintenance inspection,” he said.

Nibarger hopes that will finally bring change for the better in the industry.

“The biggest opportunity for improvement is the executive order,” he said.

Chevron did not respond to calls and emails requesting comment.