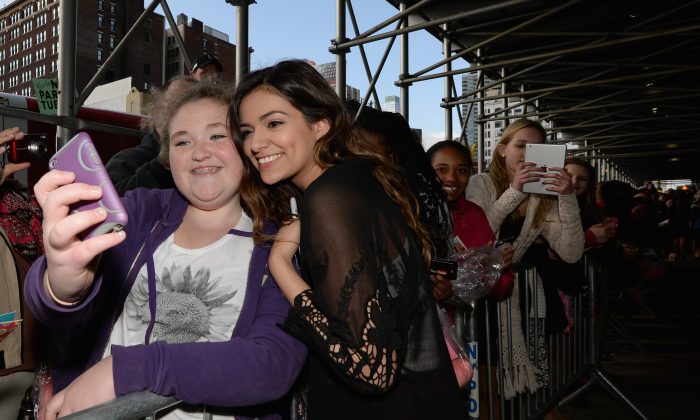 Bethany Mota (R) poses with a fan at Unleash YouTube Event on April 23, 2014 in New York City. (Dimitrios Kambouris/Getty Images for YouTube)
US

The cast rumors for Dancing with the Stars season 19 keep coming out ahead of the official announcement slated for September 4.

The professional dancers have already been announced by ABC, but the network hasn’t revealed any of the non-professionals who will compete in the upcoming season.

But the rumors have been flying, and one has been confirmed–Julianne Hough has been added as a judge to join Len Goodman, Bruno Tolioli, and Carrie Ann Inaba.

Now the blog Pure DWTS says that it’s obtained all of the names of the non-pro contestants except one, in addition to their pairings.

It says that the following pairings have been confirmed:

Peta Murgatroyd-Tommy Chong, an actor known for being half of Cheech and Chong

Mark Ballas-Sadie Robertson, a model known for being on Duck Dynasty.

Cheryl Burke-Antonio Sabato Jr., an actor known for his role on General Hospital

Val Chmerkovskiy-Janel Parrish, known for her turn as Mona on Pretty Little Liars.

Witney Carson-Alfonso Ribeiro, known for being Carlton Banks on The Fresh Prince of Bel-Air

Artem Chigvinstev-Lea Thompson, an actress known for playing Lorraine in the Back to the Future trilogy.

Keo Mostepe-LoLo Jones, an Olympian in both running and bobsled racing

The full non-professional cast will be announced on Good Morning America on September 4. Season 19 is slated to premiere on September 15.